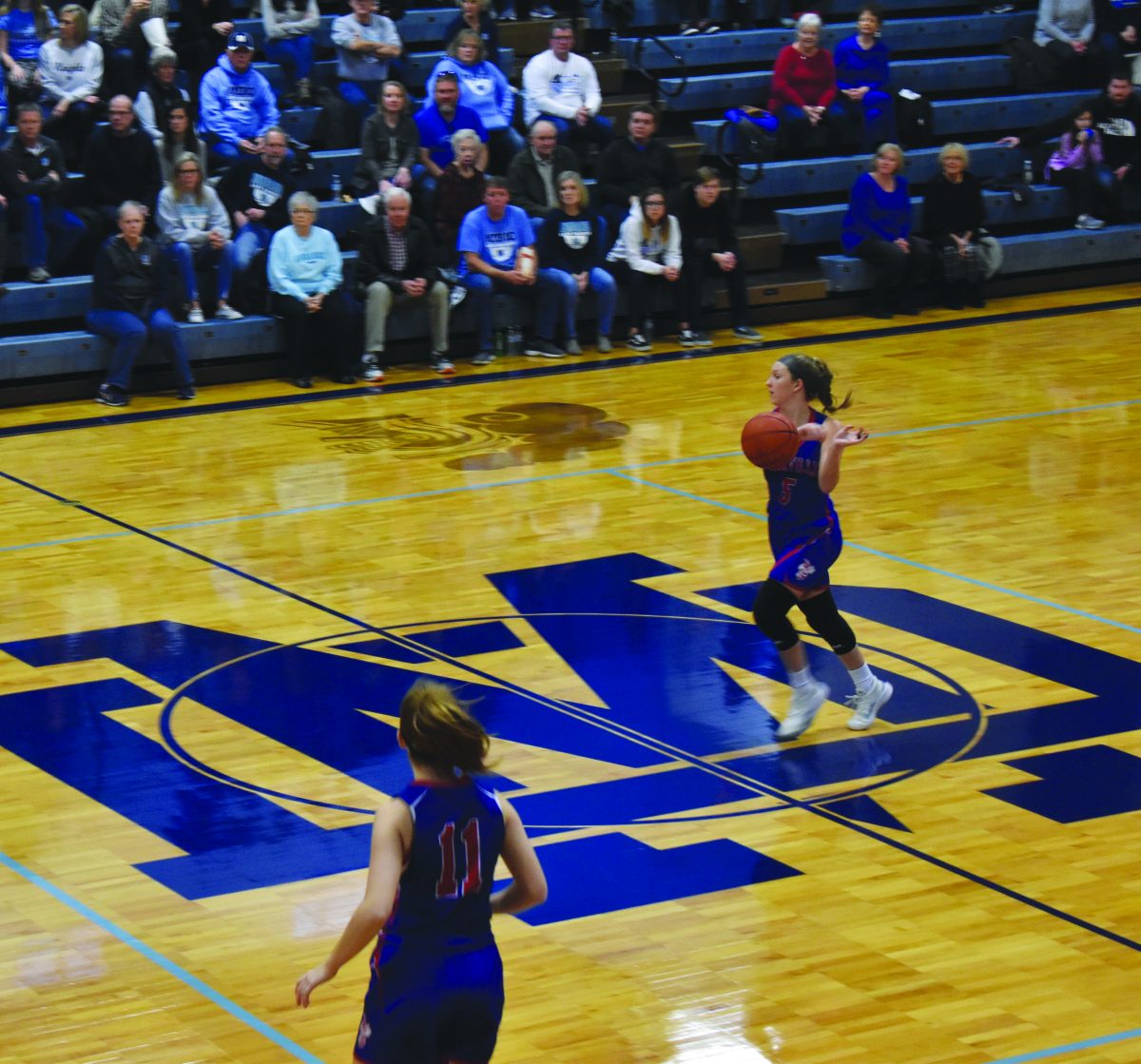 Sabrina Kollbaum delivers a no-look pass during the Hornettes game against Mater Dei. Below: Halle Reuter shoots a three against Sparta.

The Hornettes looked to get back to their winning ways on Monday, Jan. 21st in a road conference game against the Sparta Lady Bulldogs.

Nashville, who had won seven in a row after beating Belleville East in their first game of the Highland Tournament, had dropped their last two games. Although they were on the road, the Hornettes made themselves at home from the opening tip. They were able to score the first 21 points of the game.

In the first quarter alone, they knocked down five three pointers. Three of them came from Emily Schintker, and the other two came from Sabrina Kollbaum.

The scorching start from behind the arc allowed the Hornettes to take a 21 to 0 lead after one quarter of play. The sharp shooting continued throughout the second for Nashville.

Guided by four more threes from Kollbaum, the Hornettes cruised into halftime with a thirty-four point advantage. The Hornettes had all but sealed their fate in the first half, but the second half still offered some magic.

Kollbaum tallied four more triples and surpassed the record for most three pointers made in one game in Hornette history with ten. The old record was eight and was shared between Carissa Boecker (‘96-’97) and Shana Richard (‘03-’04). The Hornettes took a 57 to 11 lead into the fourth, and eventually went on to win 62 to 20.

The win marked the sixth conference win of the season for the Hornettes and win number 20 overall of the campaign. Kollbaum ended the game with 30 points, coming up only four points shy of the record for most points in a single game which is held by Jennifer York (‘90.)

Schnitker finished with nine, Alyssa Cole threw in eight more, Jordan Donato and Rylee Luechtefeld both finished with four, Ashlyn Frazier tallied three, and the scoring was rounded out with two points from Cheyenne Boester and Olivia Cook.

The Hornettes looked to build on Monday’s win on Thursday against another SIRR Conference rival, as they welcomed the Carterville Lady Lions to Assembly Hall.

The Lady Lions came into the contest with a record of 24 wins to only one loss, and were undefeated in conference play. Earlier in the season, Nashville traveled to Carterville and suffered a three point loss.

Carterville was able to extend their lead to seven and the Hornettes looked to be in danger, but four straight points from Alyssa Cole to close out the quarter brought the Hornettes back to within three heading into the second.

The Lady Lions were ahead 17-11, and then Nashville came to life. The Hornettes rallied for a 7 to run, giving them their first lead of the game.

Following seven straight points from Nashville, Carterville responded with a 7 to 0 run of their own and reclaimed their six point lead. A late three from Cole put the Hornettes back to within three midway through the game. Carterville drew first blood in the second half, but the Hornettes answered.

A Luechtefeld bucket brought them back to within two before a Halle Rueter three pointer put the Hornettes over the top. The run was capped off with another Cole bucket, and the Hornettes completed another string of seven straight points to give themselves a 28 to 25 lead.

The Lady Lions responded by scoring fourteen of the next seventeen points, and the Nashville lead had transformed into an eight point deficit.

The Hornettes went into the fourth quarter trailing by two possessions, but Carterville was able to extend their lead at one point.

Three buckets from behind the arc by Schnitker, Luechtefeld, and Cole kept the Hornettes alive, but Carterville ultimately hit their free throws when they needed to. The Hornettes were defeated 51 to 45.

Cole led the team with 19 points. Schnitker finished with eight, Luechtefeld had seven, Kollbaum had six, Rueter threw in three, and Donato finished with a pair.

The daunting Hornette schedule continued into Saturday. The Hornettes found themselves in a rematch with Mater Dei. Mater Dei took the previous matchup 37-30 in the Highland Tournament. It was a slow start for both offenses, but it was the host Lady Knights who were able to carry a three point lead into the second.

Aside from a 2 to 0 lead to start the game, the Hornettes were never able to claim the lead in the first half, and the Lady Knights were able to muster together nine more points before the half to extend their advantage to seven at the break.

Following a sluggish first half, the Hornettes found themselves in the third quarter. Highlighted by four Kollbaum three pointers, Nashville was able to turn a seven point deficit into a two point deficit heading into the fourth quarter.

After allowing Mater Dei to break the tie with time expiring in the third, the Hornettes scored the first six points of the final frame to take a 36 to 32 lead.

A Luechtefeld bucket put the Hornettes up 40 to 36 late in the period, but the Lady Knights refused to go quietly. They closed the game on a 9 to 0 run to take the contest 45 to 40.

Kollbaum finished the game with 15, and Luechtefld added 12. Cole finished with eight, Schnitker had three, and Donato threw in two more. The loss is the fourth in five games for the team. The Hornettes currently sit at 20-8 on the season. They will look to wrap of their regular season on a positive note this week. On Tuesday they will travel down 127 to Pinckneyville before welcoming DuQuoin to Assembly Hall on Thursday for Senior Night. 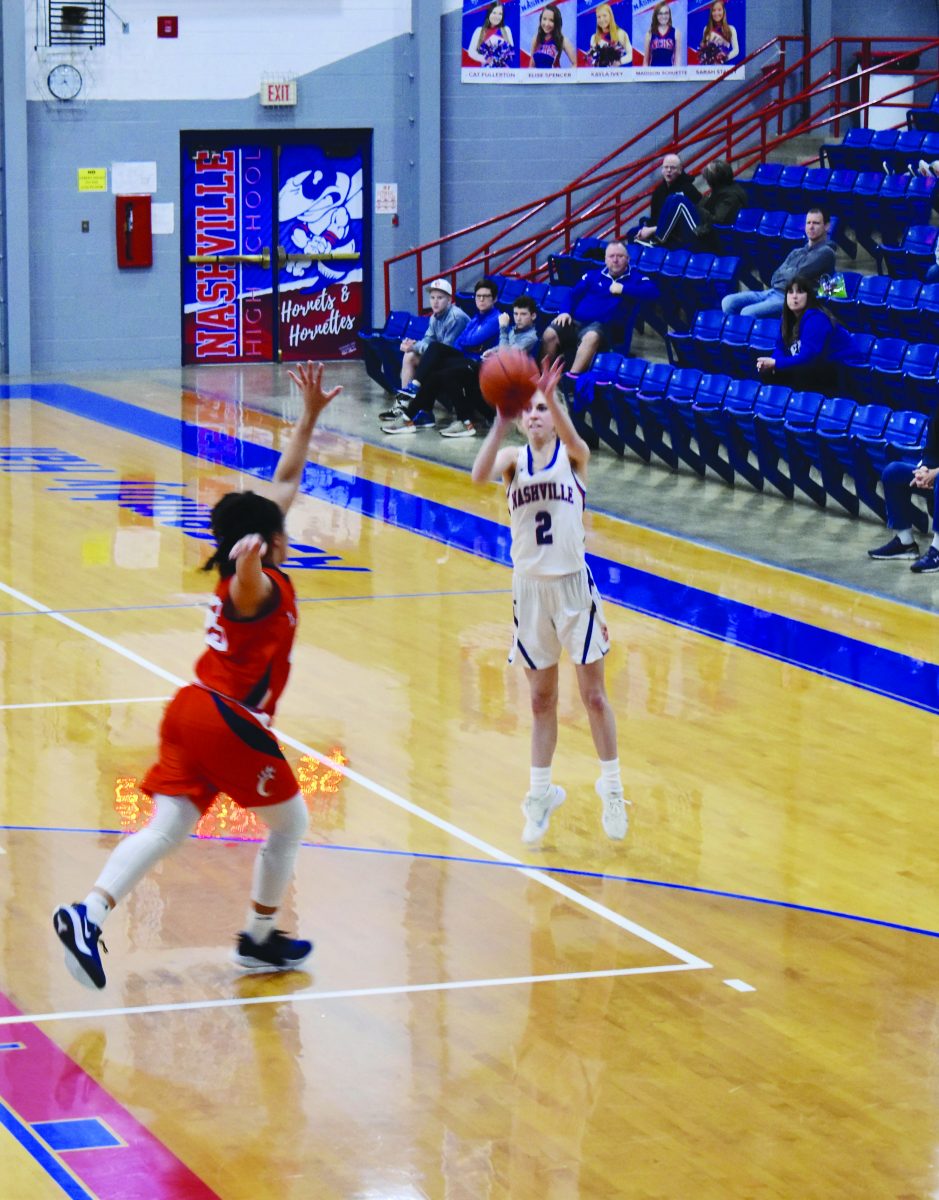