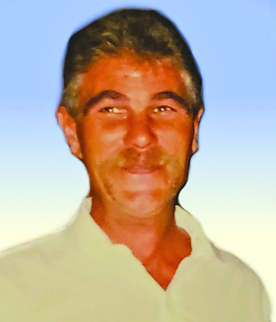 The first born of seven kids, he was raised in Swansea, IL, attended St. Augustine’s of Canterbury Grade School and graduated from Althoff Catholic High School in 1976. An avid bowler, he started his career managing Bel-Air Bowl and then Freeburg Bowl. But his love for the outdoors called him, so he moved into lawn care, working for Lawn in Order, and then the swimming pool industry where he spent the last 25 years, first at Munie Pool and Leisure in Swansea, IL and then at his current employer, Sunset Aquatech in Sunset Hills, MO. He recently began volunteering his time at Hilltoppers Swim Club in Dupo, IL, where he spent his free time making sure the pool and its grounds were in tip top shape. He did it all out of the goodness in his heart so the kids could have a safe place to spend their summers. Although the kids were at first leery of the big, tall guy walking on the pool deck with a cigarette hanging out of his mouth and a hammer in his hand, they soon saw his gentle nature and kind-heartedness and grew to love him just as everyone who knew him did.

Condolences may be expressed online at www.kurrusfh.com.

Remembrance of Life: Since Jimmy was cremated, we will be sharing memories and stories of his life at 3:00 pm, Sunday, February 9, 2020 at Kurrus Funeral Home.