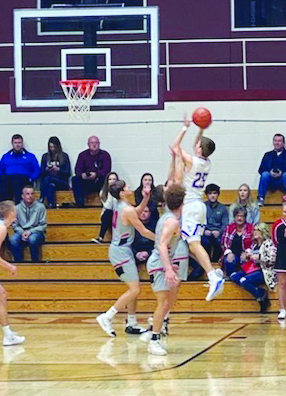 Carson Parker puts up a shot during the Hornets game against Fairfield.

A week removed from collecting two wins, the Hornets were back home Friday night as they welcomed the Sparta Bulldogs to Assembly Hall.The Hornets were able to pull away quickly in the first before extending their lead to seventeen at the half. The Hornets continued to pad their lead in the second half, and were able to go into the fourth quarter with a 45 to 23 victory. They were able to cruise to a 57 to 29 victory. Buzz Ritzel led the charge against the Bulldogs, finishing with 12 points on 5 of 7 shooting while also knocking down two three pointers. Terry Pelczynski finished with 11, nine of them coming from outside the arc. Carson Parker finished with ten and led the team in rebounds with eight. Hercules finished with nine points while racking up a team high six assists. Isaac Turner hit two threes in route to his eight points, Matt Anderson tallied four points, and Jaxon Goforth bucketed three points.

After securing a home win Friday night, the Hornets (23-5) hit the road Saturday to participate in the Rich Herrin Classic to take on the Fairfield Mules (23-4). Nashville came into the game ranked second in Class 2A, and Fairfield 22nd, respectively. The Hornets had the offense moving early, as they were able to connect on their first possessions coming from a Carson Parker layup and a Buzz Ritzel triple. Although the Hornets came out firing, the Mules would counter by also scoring on their first two possessions, and it was the makings of a back and forth thriller early on. Nashville failed to connect on their next two attempts, which opened the door for Fairfield to take a 6 to 5 lead. After surrendering the lead, the Hornets turned it over on their ensuing possession, forcing Wayne Harre to call an early timeout. Out of the timeout, the Mules were able to add to their 4-0 with another four points, putting the lead at 10 to 5. As the Mules did earlier in the quarter, the Hornets stormed back with five straight points coming on a Ritzel layup and a Terry Pelcyznski three, and the score was knotted at ten after the first set of eight. After an up tempo first quarter, the Hornets looked to slow the pace down going into the second. The contest did not remain tied for long, as a pair of Nashville turnovers allowed the Mules to take a four point lead. The Hornets countered the Mule run with punches of their own. The score was 14 to 10, then Nashville responded with a free throw by Tristen Hercules, another bucket by Ritzel, and after a Hercules steal and layup, the Hornets were back on top by one. Fairfield was forced to burn a timeout following back to back buckets from Pelczynski and Hercules, and the Hornets were able to match their biggest lead of the game at three. The second quarter surge was capped off when Ritzel was fouled while making a layup coming on the feed from Parker. Ritzel made the free throw, completing the three point play which gave Nashville a 22 to 16 lead just before the end of the half. The and-one put the lid on a ten point half for Ritzel. The Mules were able to sink one with time expiring, but the Hornets were able to take a 22 to 18 lead at the intermission. A Pelczynski triple put the blue and white ahead by seven early in the third period, but the Mules responded with a 9-2 burst, and the two teams had matching scores of 27. With fifteen ticks remaining in the third period, Parker found Ritzel on the inbounds and the junior was able to collect his second old-fashioned three point play of the afternoon. The late tally gave the Hornets a 32 to 29 lead going into the final eight minutes. Following a string of over minutes where both teams exchanged baskets, the Hornets held a slim 38 to 36 lead with just over three and a half minutes to go in the tug-of-war contest. Fairfield was able to counter with six straight points out of the timeout, and the Hornets were up against a four point deficit late in the nail-biter. Down by four with forty four second remaining, the Hornets were able to climb back to within one after Pelczynski completed the and-one opportunity. After the Mules failed to knock down some late free throws, the door was still open for the Hornets. The Mules were clinging to a one point advantage when Ritzel was fouled behind the line, and Nashville was given the opportunity to tie the game from the charity stripe. Much to the agony of Hornet fans, Ritzel failed to convert on two of three from the line, and the Mules were able to defeat the Hornets 42 to 44. Buzz was able to sting the Mules for a game high 17 points. Pelczynski finished with 11, while Jaxon Goforth and Tristen Hercules each threw in ten apiece. Parker finished off the scoring for Nashville with two. The Hornets will have a chance to pick up two wins next week as they’ll host Carterville Friday night before hopping on Highway 127 Saturday night for a clash with Pinckneyville.