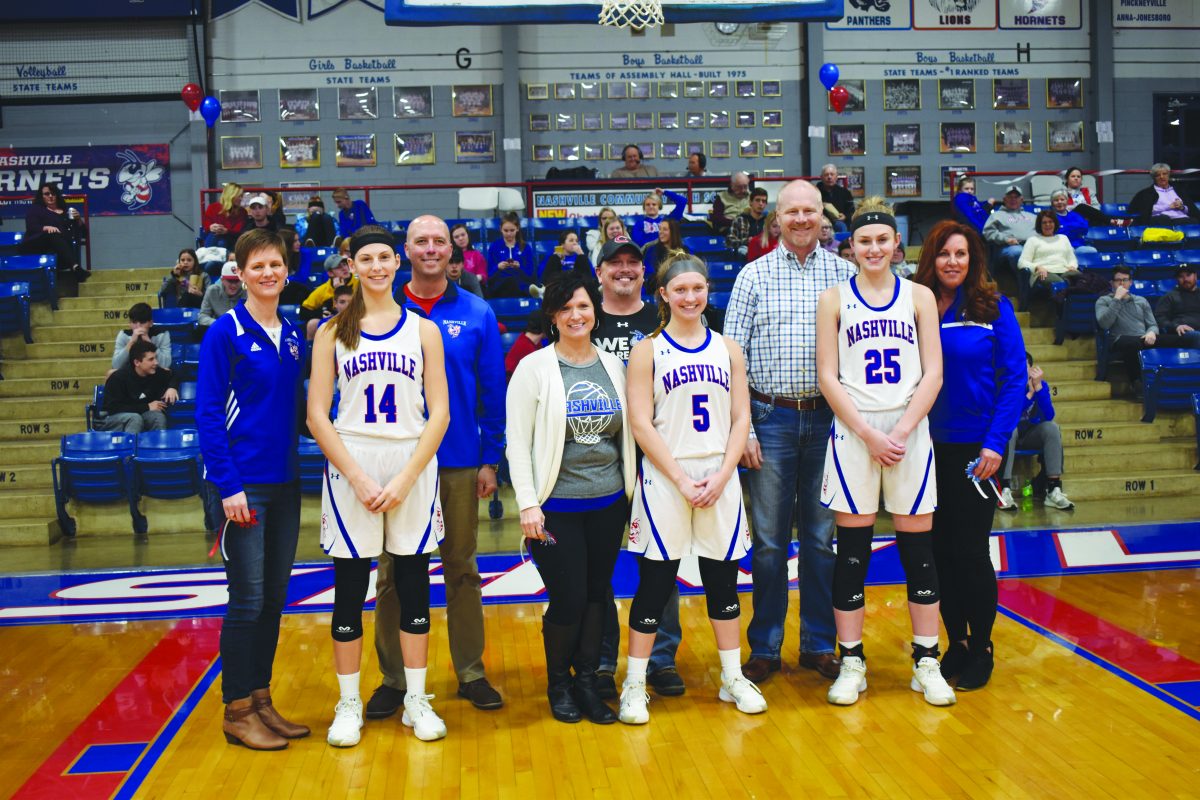 The Hornettes looked to regain control of their season Tuesday night. Nashville, who had lost five out of their previous seven games, would have to do so on the road against Pinckneyville. The first quarter witnessed the Nashville offense continue to sputter. The only points the Hornettes were able to muster together came from Rylee Luechtefeld and Jordan Donato, and Nashville found themselves in an eight point hole going into the second quarter. The Lady Panther offense only threw together seven points throughout the second quarter, but the Nashville offense drew a blank. If the Hornettes were going to stop their skid, they would have to overcome a fifteen point deficit. Heading into the second half trailing 19 to 4, the Hornettes were in desperate need of a spark. The team was able to scrape together nine third quarter points courtesy of six from Luechtefeld and made free throws coming at the hands of Donato and Emily Schnitker, but heading into the deciding minutes, the deficit was still at double figures. After failing to collect any points in the third, the Hornettes were handed their third straight loss after being defeated 31 to 15. Luechtefeld led the team with eight points, Donato added three while Halle Rueter and Schnitker both threw in a pair. The Hornettes would have a chance at redemption Thursday night against another conference rival, the Lady Indians of DuQuoin. It was a special night at Assembly Hall, as the Nashville faithful honored Sabrina Kollbaum, Rylee Luechtefeld, and Olivia Cook in a celebration of Senior Night.

“Seniors are always good to have. Their leaders in the program and these three have done a phenomenal job for us. I couldn’t ask for three better seniors. They’ve been great for our team,” Head Coach Doug Althoff said in regards to the importance of his senior players.

The senior night festivities were quickly put on hold after the Lady Indians were able to jump out to a quick 7 to 0 lead early in the opening quarter. The Hornettes were able to counter DuQuoin’s 7-0 run with seven straight points for themselves, but the Lady Indians were able to take a one point, 9 to 8 advantage into the second quarter. Kollbaum was able to score the first five points in the second frame for the host team, but DuQuoin would not go away quietly. The conference foes were knotted at thirteen, but the Hornettes were able to close the half on a 10-3 run to take a 23 to 15 lead at the intermission. The defense for the Hornettes swarmed the Lady Indians in the first half as they forced seven29 percent shooting. Nashville went into the final half of the regular season with hopes to sustain their momentum and build on their lead. The offense only managed eight third quarter points, but the defense remained stingy. DuQuoin only managed to score three points, allowing the Hornettes to carry a double digit lead into the final eight minutes. After scoring six of her teams eight points in the third quarter, Luechtefeld continued to be a force inside. An and-one from the lengthy senior extended the Hornette lead to fifteen, and the Hornettes never allowed the Lady Indians to put together a rally. A bucket from Daphne Kollbaum gave the Hornettes their largest lead of the game (twenty-one), and the Hornettes were able to roll to a 41 to 22 victory on Senior Night. Luechtefeld hit five out of her final six shots in route to a game high 19 points. Kollbaum finished with nine, Donato added five, Cook and Daphne Kollbaum both finished with three, while Schnitker contributed two to finish out the scoring for Nashville. It was not only a conference win on Senior Night, but the win allowed the Hornettes to gain positive momentum before a grueling postseason schedule.

“Momentum. We played Carterville tough, we played Mater Dei tough, and it just didn’t work out for us, but we were definitely in the games. That’s the first time all year we’ve lost three in a row. It was starting to wear on us a little bit, but after the game they were really excited and it’s been a while since it’s been like that. It’s always good to have a win going into it,” Althoff explained.

The victory spells the end of the regular season for the Hornettes, who head into the postseason with a record of 21 wins and 9 losses and 7-3 in their conference.