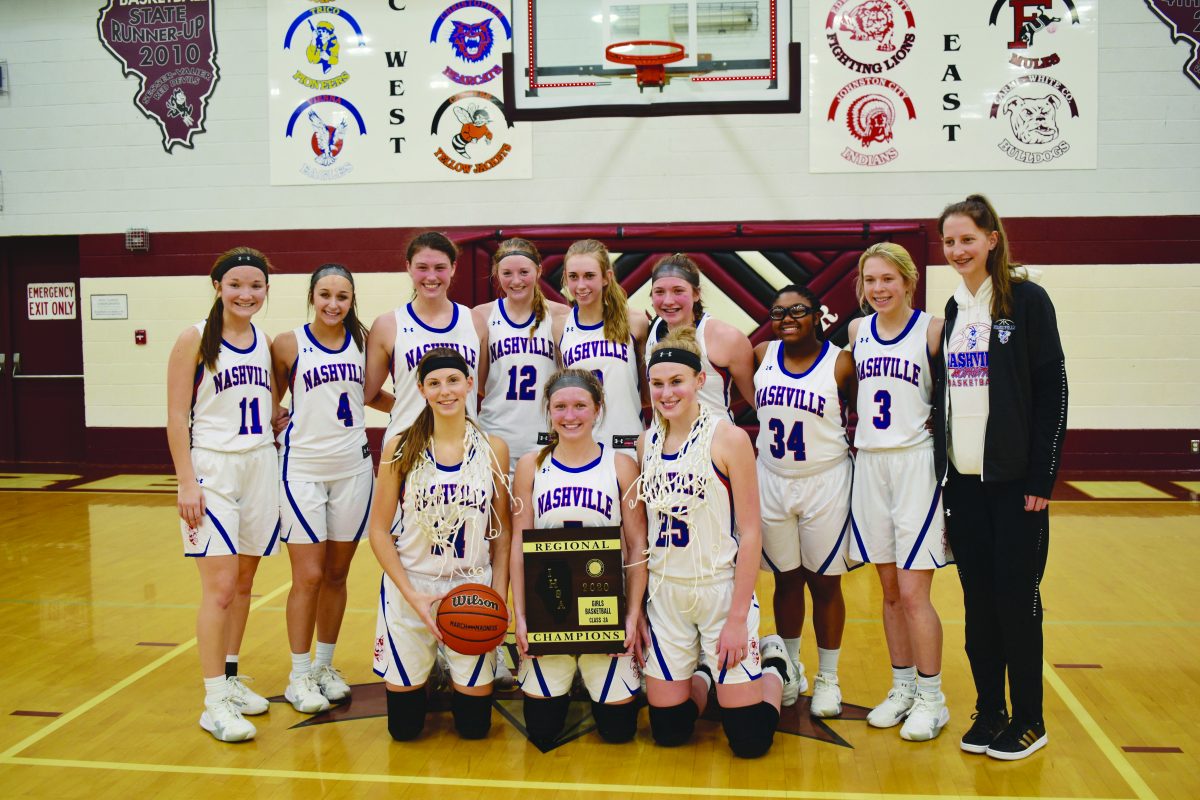 Above: The Hornettes claim their fourth regional title in as many years after beating Pinckneyville on Thursday. Nashville will play Harrisburg Tuesday at Carterville

Following a regular season campaign where they finished with a record of 21 wins and 9 losses, the Hornettes would look for win number twenty two Tuesday night against Trico. The Lady Pioneers were coming off of their Monday victory against Sparta. For the Hornettes, it was their first glimpse of postseason action since falling one game short of a state birth last season. The Lady Pioneers were able to jump on the board first, but Nashville responded by scoring nine straight points, and Trico was forced to use a timeout early in the period. The Lady Pioneers were able to get it back to within five out of the timeout, but the number one seeded Hornettes countered with seven straight points, and the lead was at twelve. The team was able to score the last seven points of the quarter, and the Hornettes were able to carry a comfortable sixteen point lead into the quarter number two. Although the offense was on pace for nearly 100 points, the defense was also a key to Nashville’s early success. The Hornettes were able to force eleven Trico turnovers in the first eight minutes, shutting down any hopes of a rally. Nashville was able continue their dominance into the second quarter, and an eleven point scoring differential paved the way for a 44 to 17 halftime lead for Nashville. After missing the last two games of the regular season due to an injury, Alyssa Cole erupted for 14 first half points. After four straight points to open up the second half, a basket from Sabrina Kollbaum extended the Hornette lead to thirty three. The lead had swelled to fourty at one point, and Nashville was able to cruise into the final period with a 63 to 25 lead. The team only managed to score two points in the final frame, but all the Hornettes had already shattered any hopes of a Trico comeback. The trouncing throughout the first three quarters allowed the Hornettes to advance to the Regional Championship game Thursday night.

“A win is a win, we will take them anyway we can get them. It’s all about survival. I thought we came out and we shot pretty well. It’s just one of those games where you have to play. You have to come ready to play and get your momentum started. It is nice to get one under our belt,” Coach Doug Althoff explained.

The Hornettes were swarming, as they had three scorers reach the double figure summit. Cole led all of them with 19, Rylee Luechtefeld had 11, and Kollbaum finished with 10. Emily Schnitker had seven, Olivia Cook and Halle Rueter added six, Jordan Donato threw in four, and Daphne Kollbaum bucketed two. At the time, the Hornettes (22-9) were unaware of who their next opponent would be. They would have to await the winner of the Pinckneyville-Sesser-Valier contest. No matter who they were up against, Nashville knew either team would present a steep slope.

“Pinckneyville wise, we know each other so well, there aren’t going to be any surprises. If it’s Sesser, any time you get to play on your home court that’s an advantage, so no matter who it is we will just try and get a win,” Althoff said.

The Hornettes had to wait about an hour and half to find out their next opponent, and it would be a familiar foe, the Pinckneyville Lady Panthers. The two teams split games this season, but the most recent one is the one that stands out to Hornette fans. The team was defeated 31 to 15 nearly two weeks ago down in Pinckneyville, a game in which the Hornettes failed to score points in two out four quarters. In this regional title match, the Hornettes would look to reverse their fortune. It was Nashville who struck first in this game coming at the hands of Cole. The contest had the makings of a defensive struggle, as after Nashville scored the next bucket did not come until 3:50 remaining in the opening quarter. Following a Lady Panther basket, it was the Hornettes who scored the next six points. The tallies came from a Cole free throw, and Luechtefeld was able to knock down a two pointer as well as a triple. The Lady Panthers were able to sink a pair of free throws before the end of the quarter, but it was Nashville on the winning end of an 8 to 4 score. The Lady Panthers were able to hang around in the second before, and then Nashville went on a 10 to 1 spurt which put the lead at thirteen. The Hornettes were eventually able to claim a 22 to 11 lead at the intermission. For the second consecutive game, Alyssa Cole reached double figures in the first half, finishing with 10. Pinckneyville was able to bucket the first score in the third, but five straight points from Cole gave Nashville a 27 to 13 advantage, their biggest of the game. The Lady Panthers were able to get the margin to ten, but a three pointer from Schnitker followed by four points from Cole put the Nashville lead back to seventeen. The Hornettes were able to sting the Lady Panthers for sixteen third period points, and Nashville had the Regional Championship plaque in their sights as they went into the final eight minutes ahead by nineteen. The Lady Panthers were not able to throw together a late rally, and the Hornettes were able to claim their fourth straight Regional Championship title.

“It’s always exciting. In my opinion, they’re one of the hardest things to win, and after that it’s icing on the cake. This year with the class system getting moved up, it just makes it even harder. We’re tickled to death to win the regional,” Coach Althoff explained.

The win means the Hornettes (23-9) will play Harrisburg in the Carterville Sectional. The game will take place Tuesday night at 7:30.