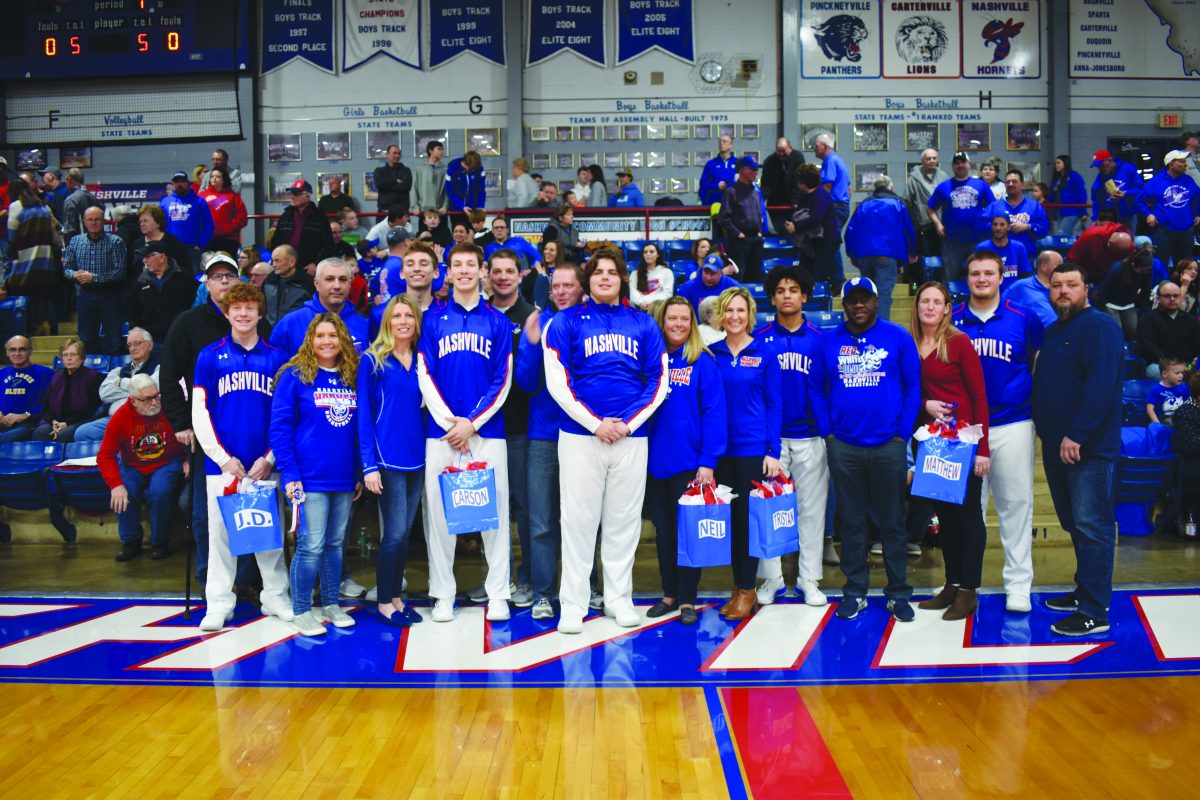 Thirty seven days ago, the Hornets ventured down to DuQuoin for their first spar of the season with the Indians. In a tightly contested battle, the visiting Hornets were the team that came away with a 35 to 34 victory. Since the Jan. 17th game, we have seen two teams head in opposite directions. The Indians are in the midst of a tailspin, as they were losers of eight out of their last ten heading into Friday. Nashville, poised for another potentially lengthy postseason run, came away with victories in seven out of their last nine games and were looking to continue their positive momentum in their regular season finale. It was also a night of much emotion at Assembly Hall, as we witnessed six seniors say their goodbyes to the storied gym. JD Shubert, Neil Kabat, Matt Anderson, Tristen Hercules, Terry Pelczynski, and Carson Parker were all acknowledged for their accomplishments and contributions over the course of the last four seasons prior to the game. Parker made his presence felt early, as the senior scored the team’s first bucket of the game. The Indians were able to battle back to score the next four, but it was twenty five in white who tallied another two points, tying the game up at four. Buzz Ritzel continued his surge with five straight points which were followed up by a quick steal and a basket from Hercules, and the Hornets had their largest lead of the game at five. Following the Hornet swarm, DuQuoin stole the last four points of the quarter, and the Hornet lead was 11 to 10 after the opening quarter. Succeeding a see-saw battle in the first frame, this contest had the makings of another wire to wire quarrel. The Hornets came out in the second quarter with a head full of steam. Baskets coming from Ritzel and Parker to start the period gave the Hornets a six point lead before another five points from Pelczynski and Isaac Turner extended the the lead to eight. The visitors were able to cut the deficit to four, but Nashville withstood the pressure and responded with eleven straight points to end the half to take a 32 to 17 after sixteen minutes. The tandem of Parker and Ritzel each finished the first half in double figures as they each tallied eleven points apiece. On a night that was about the seniors, they were able to stick to the script. During the course of the third quarter, Nashville scored fifteen points. Twelve of those come from the hands of Pelczynski, Parker, and Hercules, and the once one point margin was widened to twenty three heading into the final period of the regular season. The Hornets continued to overwhelm the Indians to start the fourth, and an 11 to 2 run enabled the Hornet lead to exceed thirty. Nashville was eventually able to come away with the 60 to 34 victory. Following the blowout win, Nashville Head Coach Wayne Harre had the highest of praise for his group of seniors.

“It’s good for them to go out this way, they all get to go in and the crowd gets behind them, and you can tell how much our fans support these kids. They appreciate how hard these six seniors have worked these last four years out here, and it’s pretty neat. It gives you chills,”

Not only were the Hornets able to win their regular season finale at home, but the win offered much more for the surging Hornets. Following the victory, the Hornets secured a share of the SIRR Conference Title with Pinckneyville, finishing with a record of 8 wins and 1 loss in conference play. More importantly, it allowed Nashville to carry the postseason on a positive note.

“We hope we can carry it on. We know anything can happen in the postseason, we have to prepare the best we can and hopefully things will fall the way we hope,” Harre said.

The Hornets saw three scorers reach double figures. Those scorers were Ritzel with 18, Parker with 17, and Pelczynski with 11. Hercules capped off his regulars season campaign with seven points, while Neil Kabat jumped on the board with three points. Anderson and Turner rounded out the attack, finishing with two apiece.