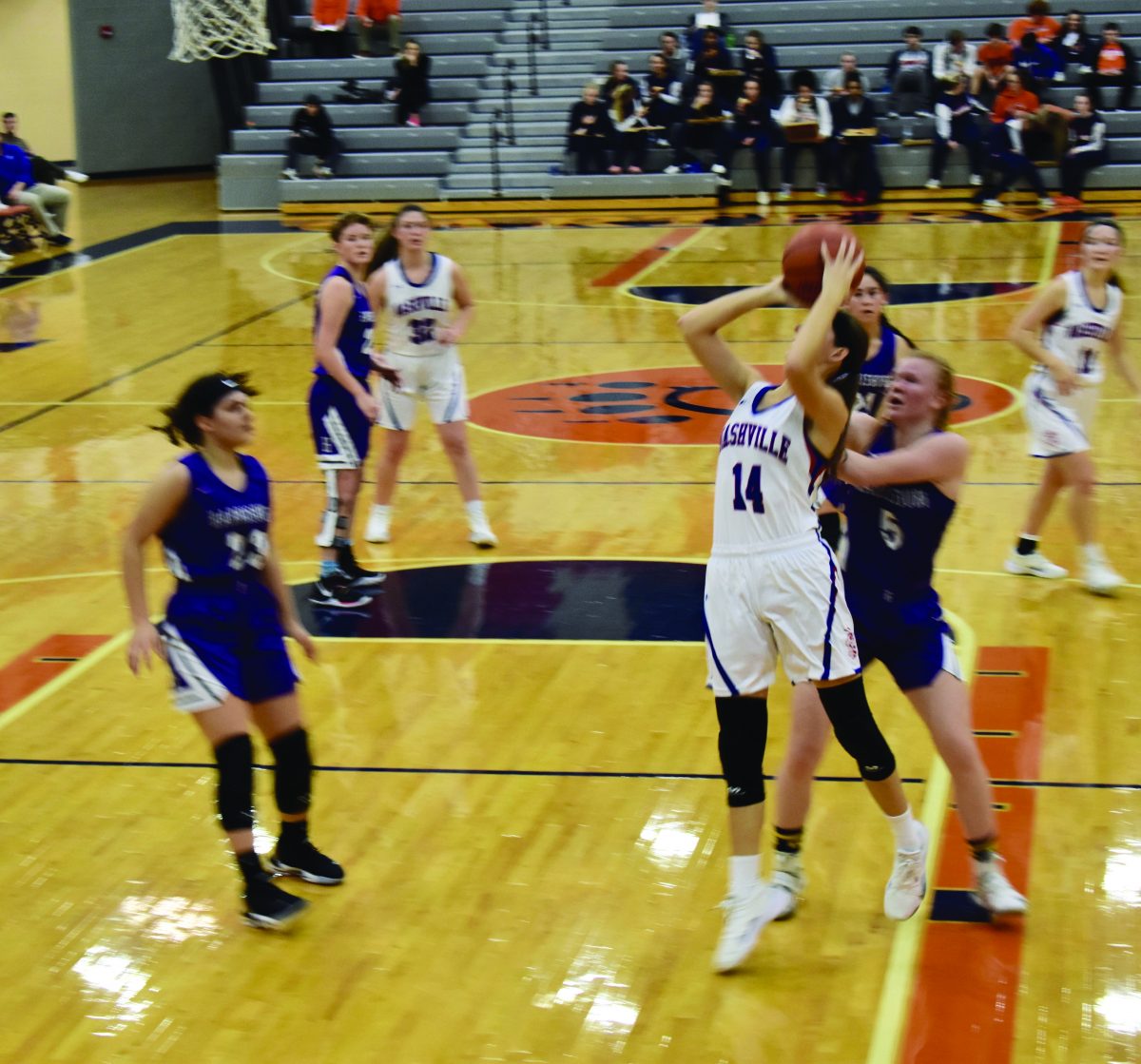 Olivia Cook goes up for a shot during Tuesday’s win against Harrisburg.

Five days removed from securing their fourth straight Regional Championship, the Hornettes took the floor in the Carterville Sectional against Harrisburg last Tuesday. The Bulldogs came into the game with an impressive record of 29 wins to only 4 losses. The Hornettes, winners of their last three, entered the game with 23 wins and 9 losses, respectively. Due to Carterville coming out on top in the earlier game against Freeburg, the winner of the Hornette and Lady Bulldog match would have to face the host Lady Lions. The Hornettes were able to draw first blood in this game coming at the hands of a successful and-one conversion from Rylee Luechtefeld. The Lady Bulldogs were able to grab the next five points, but Jordan Donato shot from behind the arc allowed the Hornettes to reclaim their lead. A pair of Luechtefeld shots from the charity stripe gave the Hornettes their largest lead of the quarter at three before Harrisburg answered with four straight points of their own. The game was in it’s beginning phase, and the score was only 9 to 8, but the crowd was already experiencing those postseason mood swings, as there were already three lead changes. In the later stages of the first quarter, Nashville was not only able to gain the upper hand but extend their lead as well. For the second time in the quarter, a Donato triple put the Hornettes back on top before Alyssa Cole countered with three points of her own, this time coming courtesy of the old-fashioned three point play. The Lady Bulldogs were to cut it back to three, but a late three pointer from Sabrina Kollbaum extended the Hornette lead to six going into quarter number two. Although the Lady Bulldogs saw the Hornettes grab the momentum late in the period, the team did not shy away from the challenge. The Nashville offense went quiet in the second quarter, as the only field goals came the senior duo of Kollbaum and Olivia Cook. The Hornettes were forced to play much of the second period without Luechtefeld, who took to the bench with 6:50 remaining due to early having three fouls. The Lady Bulldogs were able to get within two, but four straight Hornette points to close out the half were enough for Nashville to maintain their six point lead. Coach Althoff had high praise for the way his team handled the adversity of not having Luechtefeld on the court for the second quarter.

“It was awesome. When you lose a big player like that, I thought we had great minutes off the bench from Halle Rueter and Olivia Cook. That’s what it’s about, you have to have people step up and take care of stuff like that,” Althoff said.

“I really wasn’t expecting that three, but you know what it went in and it was awesome. She’s a senior, she’s a clutch player. I almost told her to pull it back out and try and get to the line, but that’s what seniors do, they just take charge and make those big shots for you,” Head Coach Doug Althoff said.

Harrisburg never went away, but the Hornettes did what they had to do from the line in the final minutes, as they were able to knock down all six of their free throw attempts.  After being down 9 to 8, the team never again trailed in this semi-final game and were able to hold on for a 44 to 36 triumph. Cole led the team in scoring with 12 points. Kollbaum also climbed into double figures after collecting 10 points. Donato finished with nine, Luechtefeld added seven, Emily Schnitker threw in four, and Cook had two. The victory set the table for a “Third Times a Charm” quarrel against the Carterville Lady Lions. The Hornettes knew what they were up against, as they had already came up on the losing end of the two previous games against their conference opponent.

“Round three. We know what they can do, they know what we can do. I’m looking for a really tight, close game. Whoever gets out of that game, it’ll be a great win for either team,” Althoff said.

Carterville, winners of their last twenty eight, went into the Sectional Championship with an undefeated record on their home court.

As the pregame festivities wrapped up, the fans barely had enough time to take their seats before the Lady Lions made their run. The game was knotted at two apiece, and then a team with only one loss did what a team with only one loss does. Carterville scored eleven straight points, and the Hornettes were quickly looking at 13 to 2 deficit in the first period. The eruption was halted due to a Cole three pointer, but the Lady Lions scored the last five points of the quarter to take a thirteen point lead after eight minutes.

“You can’t play on their terms. They were dictating the tempo of the first quarter. Rarely do I call that many timeouts in the first quarter, but I had to slow the momentum down because they were just going,” Althoff said in regards to Carterville’s big first quarter.

The Hornettes did not do themselves any favors, as they missed eight out of their first nine attempts to begin the title match. The second quarter witnessed the host team build their largest lead of the game at fourteen, but to Nashville’s credit, they continued to battle. From that point on, they outscored Carterville by three, and the lead was cut to eleven at the half. Going into the second half with a 27 to 16 lead, Carterville began the third quarter much like they did the first. Two straight buckets to open up the half enabled the Lady Lions to stretch their lead to sixteen. The Hornettes were up against a 34 to 18 deficit, but all hope was not lost. The team closed the quarter out on a 10 to 4 run to close the gap to ten with eight minutes left. The Hornettes were able to get back in the game in large part because of their efforts from the free throw line. Luechtefeld and Cole drained six straight combined, and the run was capped off by a late basket from Kollbaum. The Lady Lions were able to cease the Hornette momentum with a layup to begin the fourth quarter, and the lead was back up to twelve. Nashville continued its strong effort from the line, and a pair of Luechtefeld shots from the free-throw line pulled the Hornettes back to ten. After Carterville enlarged the deficit to thirteen and then twelve, the Hornettes were able to get it back to ten twice, but the team was never able to trim the margin to single digits, and the Hornettes saw their season end following a 54 to 42 loss.

“They came out firing. You have to give them all the credit in the world, they just have a great all around team. They have scorers, they have drivers, they have athletes,” Althoff said.

Trailing by thirteen after the first quarter, the Hornettes were able to outscore the Lady Lions in both the second and third periods, but in the end, the first quarter deficit proved to be too much to overcome.

“I told the girls, I couldn’t be prouder of them. They never quit, they just kept playing, it just didn’t work out. It’s hard to take that,” Althoff said.

Cole led the team once again with 18 points, while 12 points were awarded to Luechtefeld. Kollbaum finished with six while Donato and Rueter both added two. The Hornettes finished the year with 24 wins and 10 losses while taking second in the Mississippi Division with a 7 and 3 record. They were also able to take home second place in their NIT Tournament to begin the year to go along with fourth place in a loaded Mascoutah Tournament over holiday break. 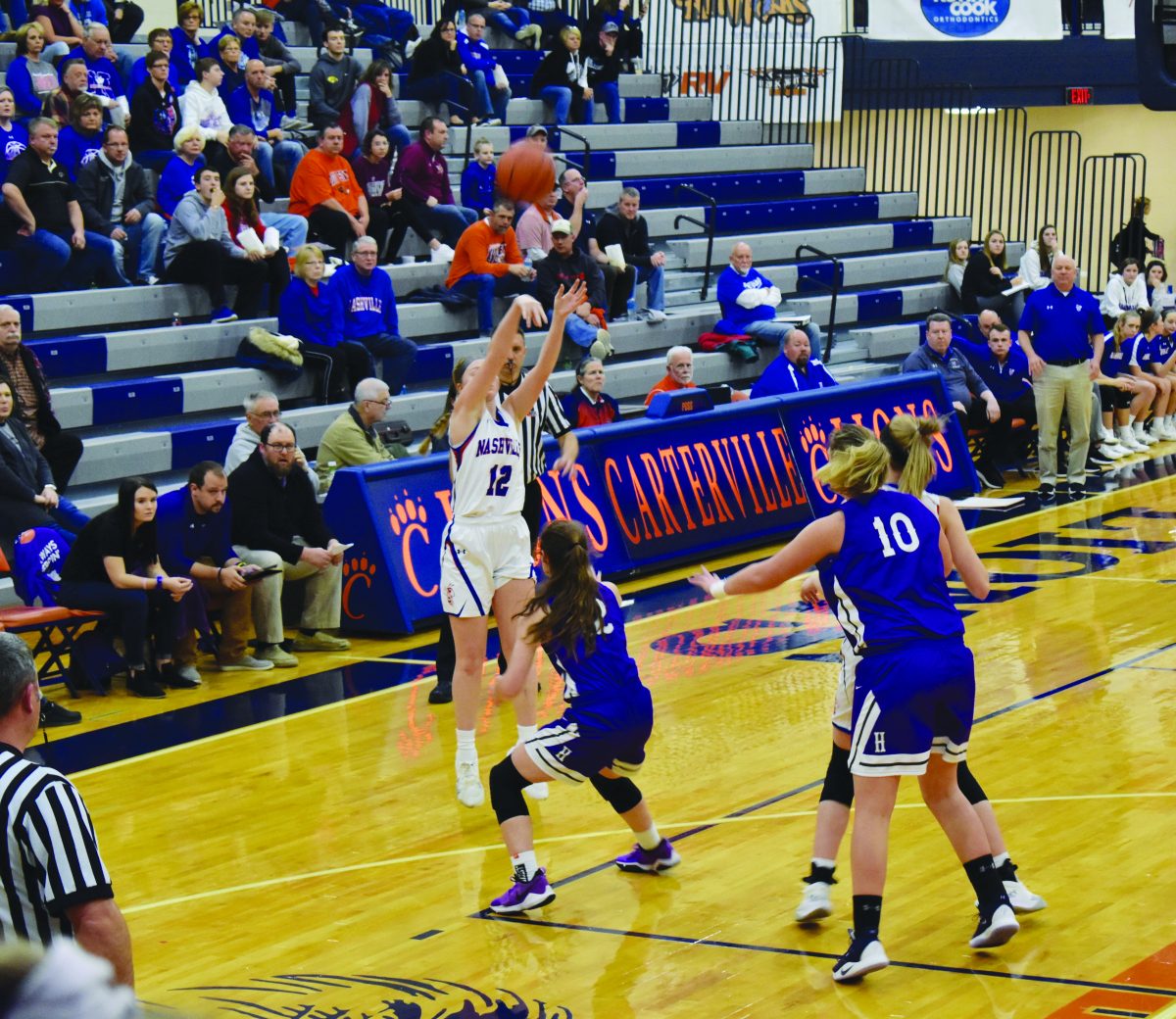