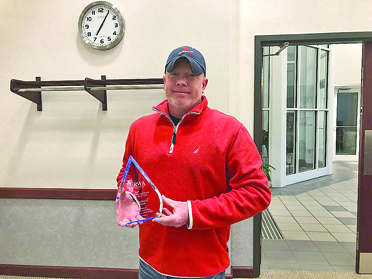 “This accurately describes Mr. Jim Leonard,” said Frank Dunmire, executive director of the Illinois Rural Water Association. “Jim Leonard has shown himself to be truly committed to furthering the professionalism of the Water Treatment Industry, by helping to ensure a safe and clean potable water for the environment and the customers of Nashville, Illinois.”

Leonard, who has worked for the city for 16 years, said he is joined in his achievement with his team at the water plant, which includes Chuck Koepke, Mike Hempen and Caleb Lyons. Together, the department is able to provide safe and clean potable water for the city.

This is not the first time that Leonard and the city of Nashville have received accolades for the water supply. Leonard had been previously named one of three runners-up in the Illinois Potable Water Supply Operators Association a couple of years ago. He was one of nine “outstanding professionals in their individual categories of service in producing and supplying drinking water for Illinois public water supply consumers.”

Mayor Raymond Kolweier and the Nashville City Council congratulated Leonard and thanked him for his dedication for the city and its residents.

Leonard and his wife Laura live in Nashville with their two sons Cade and Jase.