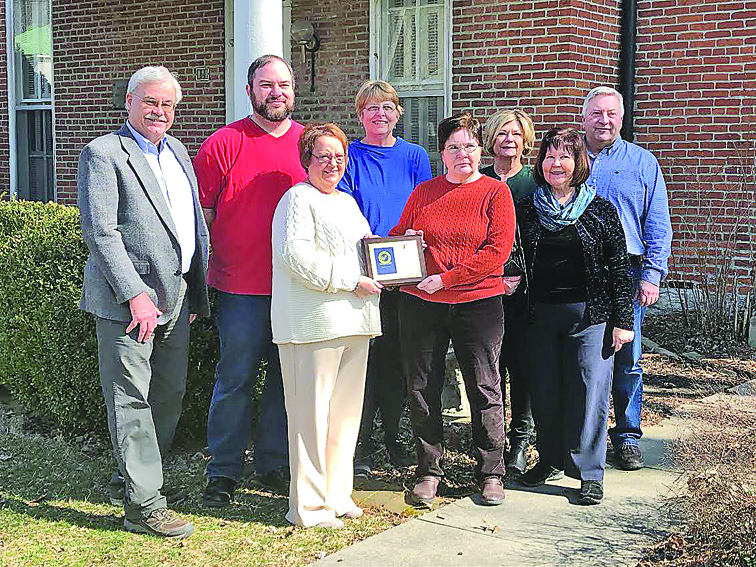 Members of the Washington County Historical Society pose together at the museum after being presented the 2019 Book Of The Year Award for Local Histories and Families by Acclaim Press. The presentation was held on Sunday, February 23, at the WCHS museum. Pictured are front row: President Cathy Dinkelman, Elaine Rucker, chair of the book committee, and Georgine Hawley May; Back row: David Marshall, Dan Bronke, Anita Revelle, Don and Shelley Rybacki. Not pictured is Leticia Luecking. (Photo by Leah Williams)

It took 18 months to collect, compile, proofread and finish but all that time and hard work helped one local organization take home a significant honor.

The Washington County Historical Society received Book of the Year from its publisher for its “Washington County, Illinois: History And Families Bicentennial Edition 1818-2018.” The distinguished prize was one of three that Acclaim Press handed out among its 2019 releases during a ceremony held in January.

The award was presented by Clint Oftedahl, who was the publishing consultant on the project, and given to the WCHS on Sunday, February 23.

Oftedahl said he first approached the WCHS in June 2017 about the possibility of publishing the book to commemorate the county’s 200th anniversary. The massive 400 page coffee table volume was released in March 2019, and it encompasses the history of Washington County, its families and businesses through community submissions.

WCHS President Cathy Dinkelman said the idea for the history book project seemed appealing at the time because the last one had been completed in 1970.

“I thought it was pretty outstanding,” Dinkelman said on hearing word about the book’s honor. “It makes all of the hard work worth it.”

The WCHS called out for submissions from members of the community and local businesses, and submissions poured in from all over the country to be included in the commemorative book. While other comparative county history books under Acclaim’s umbrella are 250 pages in length, Washington County’s almost doubled in size.

Oftedahl said one aspect that is rare for other county books that have been published is the submission from the Washington County government offices, which requested pages for each of its departments.

“When I came back and told my editor that they would have six to eight pages, he was shocked,” Oftedahl said.

WCHS members added that in editing the book, they learned lots of different things that they didn’t previously knew about Washington County. Among the stories included in the history book is an anecdote of Al Capone visiting Du Bois and a cholera epidemic that took six lives of one local family’s seven children in one week.

Oftedahl said that this book, which won the local history and family category for Acclaim, measured exceptionally well by all of the publisher’s standards, which included market reception, size, book quality and historical significance. He said the book that the WCHS helped produce was one of the top 10 best county history books that Acclaim has ever produced.

“It performed well in every conceivable way,” he said. “If I could bottle this group and somehow make a potion (for other book projects)… I would.”

“This book could not have been completed without the terrific support of hundreds of Washington County families, past and present, who submitted family biographies and photos, along with dozens and dozens of county businesses, churches, schools, and organizations who also submitted their histories,” said Elaine Rucker, chair of the book committee, in a press release.

To date there have been approximately 800 copies of “Washington County, Illinois: History And Families – Bicentennial Edition 1818-2018” have been sold. If you are interested in receiving a copy, you can purchase the book for $66 at the Washington County Historical Society Museum or the L&N Depot on Saturdays from 1 to 4 p.m. Any questions can be answered by messaging WCHS on Facebook.