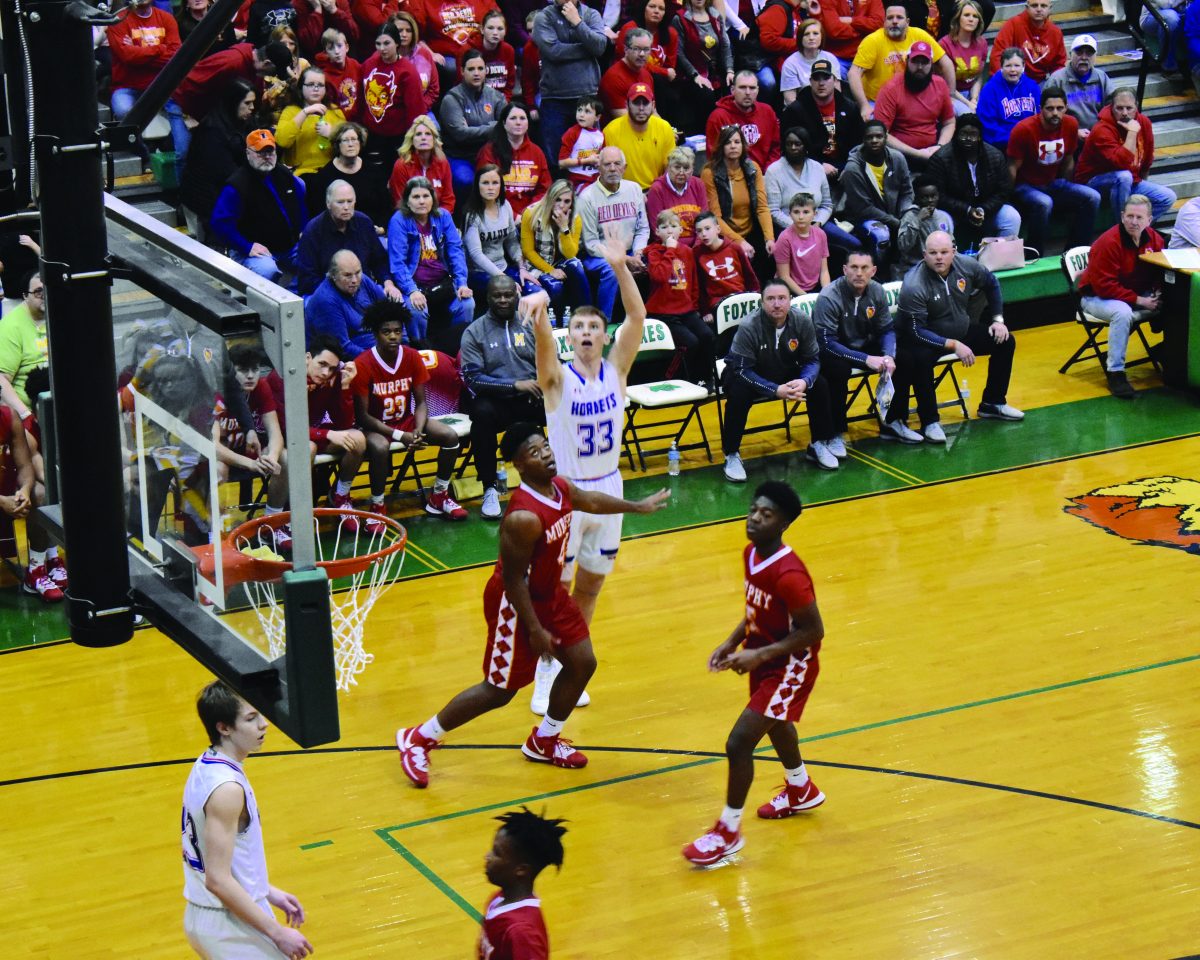 Right: Terry Pelczynski puts up a three pointer in the Sectional Championship game. Pelczynski finished the contest with 11 points.

Four days removed from sealing their fate in the Regional Championship against Althoff Catholic, the Hornets looked to keep their season alive Tuesday against Benton in the Hamilton County Sectional. The sectional semi final game was the second time the teams have crossed paths this season. Earlier in the campaign, Benton visited Assembly Hall where they came away with a last second 28 to 26 victory. The Rangers (27-7), were victorious in nine straight games dating back to Feb. 7th. Benton also was fresh off a Regional Championship title against none other than Fairfield, who defeated Nashville 44 to 42 nearly one month ago at the Rich Herrin Shootout. Needless to say, the Hornets looked much more polished than they did the first matchup. Nashville tallied fourteen first quarter points, which was already more than half of their offensive production of the previous game with the Rangers. While the offense jumped out to a scorching start, the theme for the defense remained the same. Benton only managed to knock down one field goal out of eight attempts to start the game, which allowed the Hornets to take a twelve point lead after eight minutes. The quarter was topped off by a late three pointer from Buzz Ritzel, three of his seven points to begin the game. The Hornet defense remained stingy in the second quarter as they held Benton to one made field goal and forced seven turnovers in route to a fifteen point halftime lead. The Rangers only managed to convert on 14% of their endeavours in the first half. Nashville Head Coach Wayne Harre explained the defensive gameplan in its simplest term.

“We were just trying to stay between them and the basket, it’s not rocket science, that’s all we try to do. I thought we did a good job on that,” Harre said

The blue and white kept things rolling in the second half, and an Isaac Turner free throw gave Nashville their largest lead of the game at twenty-one. The Hornets eventually took a 34 to 14 lead into the final eight minutes. Although the Rangers were technically not out the game, an 11-0 Hornet breach put the lead to thirty two. Aided by an ungenerous defense and timely offense, Nashville was able to cruise into the Sectional Championship at the hands of a 49 to 22 victory.

“The ball went in the basket, and fortunately for us, theirs didn’t. They had some good looks that just didn’t fall tonight for them, and that was fortunate for us,” Harre said.

One of the big keys for Wayne Harre’s squad was the balance on offense, as the team had three different scorers reach double figures in the forms of Ritzel and Parker with 12, while Jaxon Goforth collected 11.

“We had good balance from everybody, everybody stepped up and played well,” Harre said.

Another eye popping stat from the contest was Nashville’s ability to dominate the boards, as they won the battle 29-12.

“We rebounded really well. If you can do that, that really helps your defense because they don’t get another possession,” Harre said.

Nashville’s scoring was finished off by eight points from Turner, four points from Tristen Hercules, and a pair of free throws from Nolan Heggemeier. The convincing victory in the Sectional Title game against the winner of Mt. Carmel and Murphysboro, which was played Wednesday. Murphysboro came out on top 45 to 35 over the Aces, which meant the Hornets would be going up against fellow SIRR Conference member, the Red Devils. Murphysboro resides in the Ohio Division, while the Hornets play in the Mississippi. Both teams came into the game with only seven losses. The Red Devils were able to grab the first four points of the game before Goforth calmed things down with a Hornet basket. The Red Devils eventually marched into the second period with an 8 to 4 advantage. Murphy Junior guard JaQuan Jackson was able to tally the first five points of the second frame to give the Red Devils a nine point lead early in period two. Another Goforth bucket pulled the Hornets back to within seven, but Nashville continued to struggle to have an answer for Jackson, who scored his team’s next four points, and all of a sudden Nashville was in an eleven point hole. A Parker three pointer dwindled the deficit to single digits, but a late basket from Murphy’s Calvin Clemons gave the Red Devils a ten point lead at the half. Coming off a 26 percent shooting mark in the first half, the Hornets were desperately looking to seize momentum early in the second half. Dezmond Clark had other plans, as the senior buried two straight threes from the wing to begin the period to push the lead to fourteen. Although the outlook looked bleak, the Hornets did not shy away from the challenge. Six straight points from Parker, Ritzel, and Goforth cut the deficit to eight, and the Red Devils were forced to burn a timeout. In a see-saw quarter, Murphysboro was able to get their lead back to ten two different times, but the Hornets battled back to cut the margin to five before going into the fourth. In a quarter where they once trailed by double digits twice, the Hornets managed to stay within striking distance with eight minutes left. The back and forth continued into the fourth quarter, as Jackson and Terry Pelcyznski traded triples to begin the quarter, but to the dismay of Hornet fans, the team was never able to get within five. Jackson followed up Pelcyznski’s three with another of his own, and the lead was back to eight. Following the Jackson three point barrage, Jamarr McZeke answered with four more, and the lead was back to twelve. The Hornets were able to get back to within one more time, but it was too little too late. Nashville saw their season come to and end following a 57 to 47 loss. With the loss, the Hornets saw three different scorers top double figures. Parker led the team with 13, while Pelczynski and Goforth both threw in 11 apiece. Ritzel finished with eight, while two points were credited to both Hercules and Turner. The Hornets finished their 2019-20 campaign with a record of 28 wins and 8 losses. Although the loss spells the end of the road for the Hornets, the team was able to impress throughout the season. The team opened up the season in the Mascoutah Tip-Off Classic where they finished first place. The team also came home with second place in the Mater Dei Holiday Tournament before being awarded first place in the Nashville Invitational Tournament later in the season. The team also won the SIRR Mississippi Division with a record of 10-1 in conference play. It was the team’s second consecutive division title and 17th overall in SIRR history. 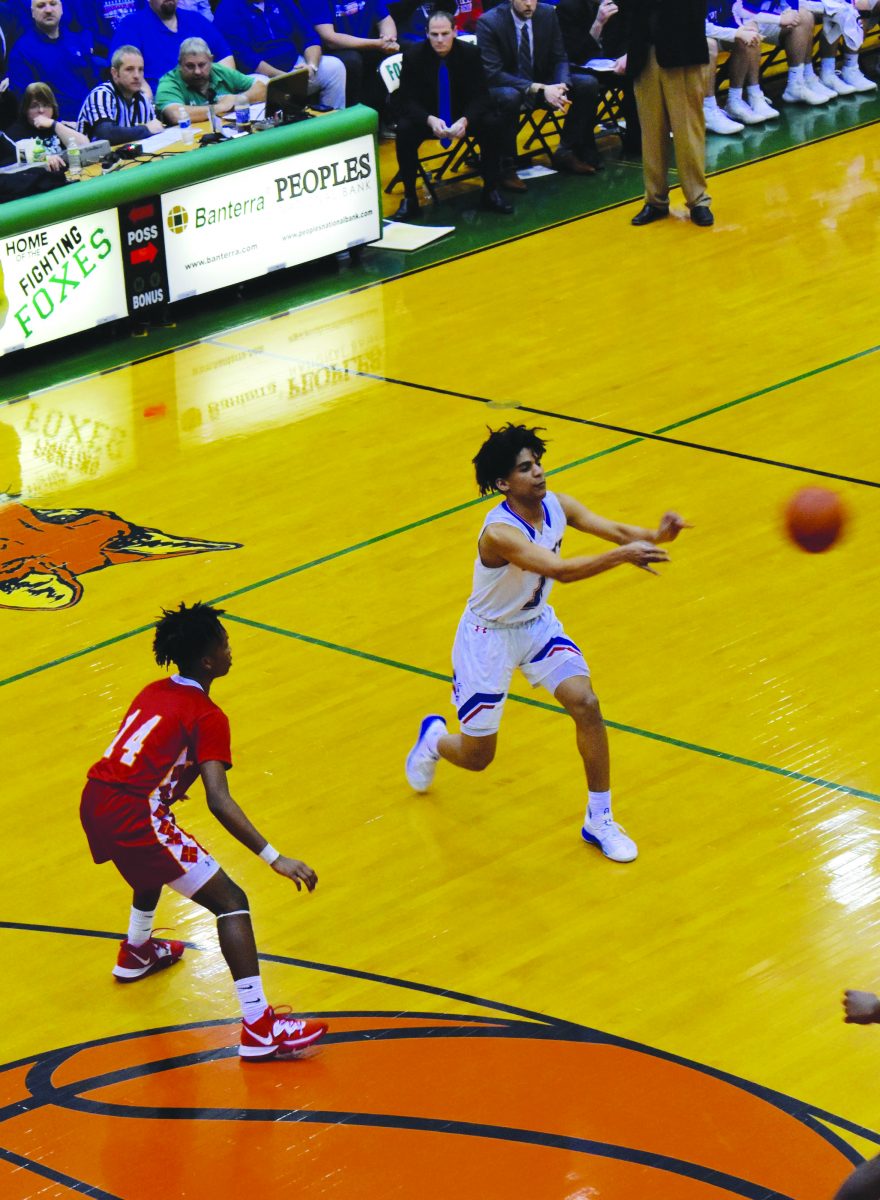 Left: Tristen Hercules dishes a pass to a teammate during Friday’s Sectional Championship game against Murphy. 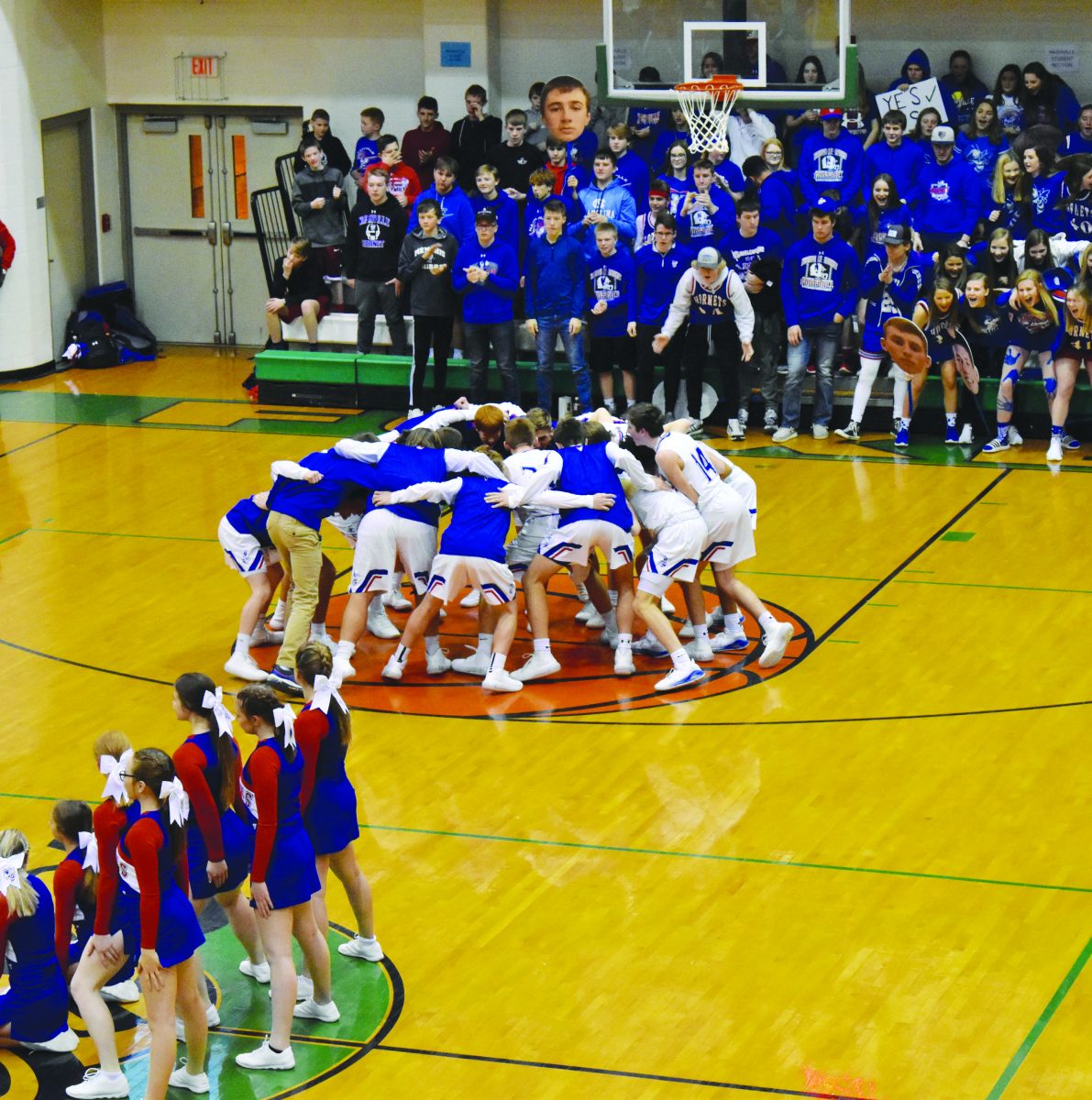 Above: The Hornets huddle together after their introductions before Friday’s Sectional Championship Game against Murphysboro.