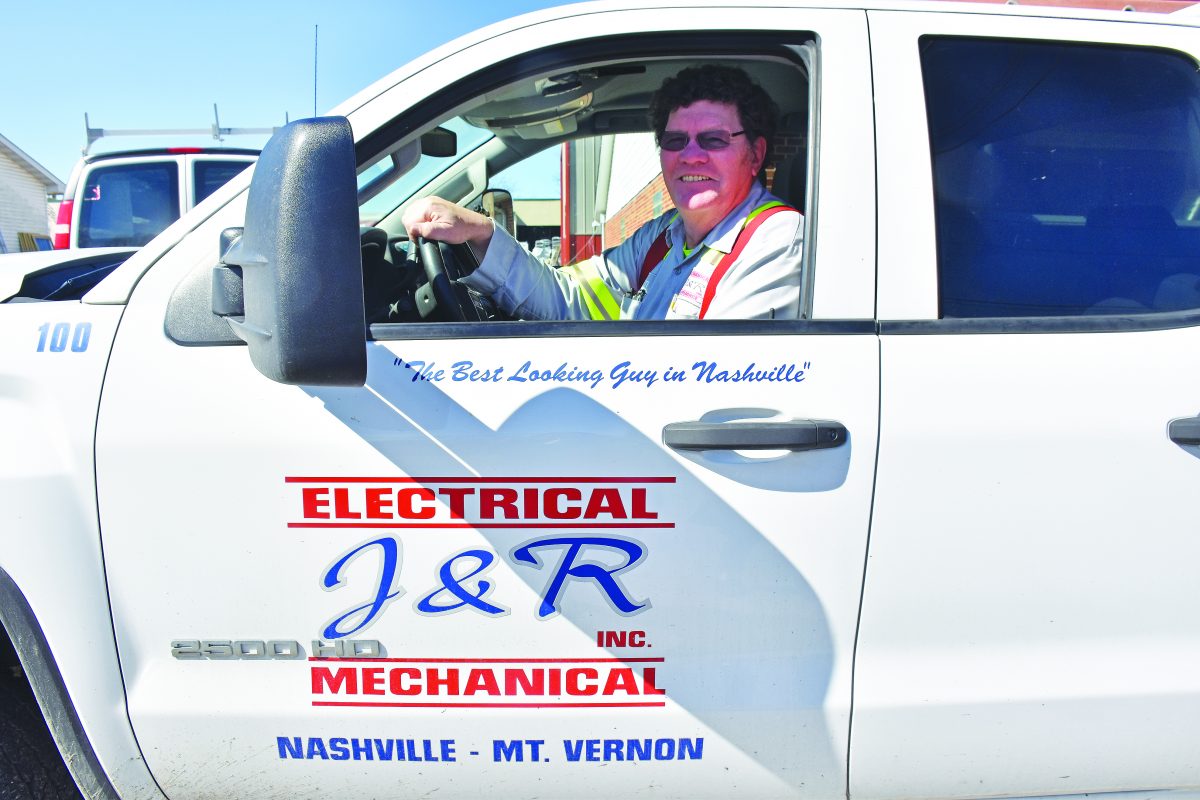 “The Best Looking Guy In Nashville” has received a new title. Jim Schomaker was named the 2020 Volunteer of the Year during the March meeting of the Nashville Chamber of Commerce. An upcoming banquet on Monday, March 23, at the Nashville American Legion will honor Schomaker, who was nominated for the annual distinction based on his willingness to come and help businesses and members of the community around the clock. (Photo By Leah Williams)

There are things that Jim Schomaker won’t tell you.Nothing will be said about the behind-the-scenes hours he spends setting everything up for the downtown Fall Festival and Hometown Christmas events.

He is mum about the time the boiler went out in church and it couldn’t be fixed in time so he set up chairs in the parish hall. He even made coffee and cocoa.

He remains quiet about the countless on call hours he has spent taking a look at the electrical needs of the community, the numerous distress calls he takes after hours and is off to flip those switches back on.

“Whatever is said about me is not true,” Schomaker said. “It’s worse.”

But all the things Jimmy won’t say about himself speaks volumes. Schomaker, owner of J&R Appliances, was named the 2020 Volunteer of the Year. The annual banquet will celebrate him as the guest of honor with a roast and dinner on Monday, March 23, at the Nashville American Legion.

Schomaker has owned and operated J&R Appliances since 1978. He begins his day with a “Lone Ranger” rerun and a hearty breakfast, either liver sausage or an omelet, toast with homemade strawberry jelly, hashbrowns.

Where the rest of the day – and sometimes in the wee hours of the night – is anyone’s guess.

But many in the community attest that when a switch won’t work, a furnace stops producing heat or any other malfunction, Schomaker is the one to call.

“Jim is always available when I need help with a church maintenance emergency. More than once, he has responded to an early Sunday morning phone call to restore heat or air conditioning- (depending on the season),” Rev. Beverly Kahle said. “A few weeks ago the boiler pumps went out- impossible to fix before services.  Jim helped me set up our fellowship hall in order for us to worship there instead. Not only did he set up screens, move the bulletins, offering plates, and other essentials for worship, he heated water for hot chocolate and made coffee for us to enjoy during worship.”

“I can call him on a Sunday, and he is here,” said Steph Buretta, owner of Buretta’s Bar & Grill. “He is more than willing to help, day, night, rain, snow, shine. He is always willing to help and he always has a good story.”

“Jim is out here on Thursday evening getting the electric hooked up for all the vendors and whatever lese he can help with,” said Chamber Director Doris Povolish. “And then early Sunday morning, he is helping to get the stage down and making sure everything is cleaned up.”

In one of the nominating letters for his recognition, Larry Boreup spoke about the “countless times” he has helped others and called him “one of the most dedicated citizens.”

“One phone call, and his wife holds his dinner,” he said in the letter.

Schomaker denies all of these stories about them.

While Schomaker can give off a tough exterior, many who know him best say he can show a softer side to his beloved grandchildren and anyone who may need a shoulder to cry on.

“I’ll never forget the time I was working and this customer called,” said Shelly Love, longtime employee at J&R. “He was talking so sweet to her. I got tears in my eyes. I have tears now. I couldn’t believe it.”

Schomaker did open up a little about how he got his moniker that adorns his trucks. He had visited a supply store in Centralia and saw out of the corner of his eye a magazine with scantily clad male models. When he called up the store the following day, he was asked to introduce himself.

“She asked me, ‘Who should I say is calling?’” he said. “I said, ‘Well I’m the best looking guy here in Nashville.”

For tickets to the Volunteer of the Year banquet, contact the Nashville Chamber of Commerce office.