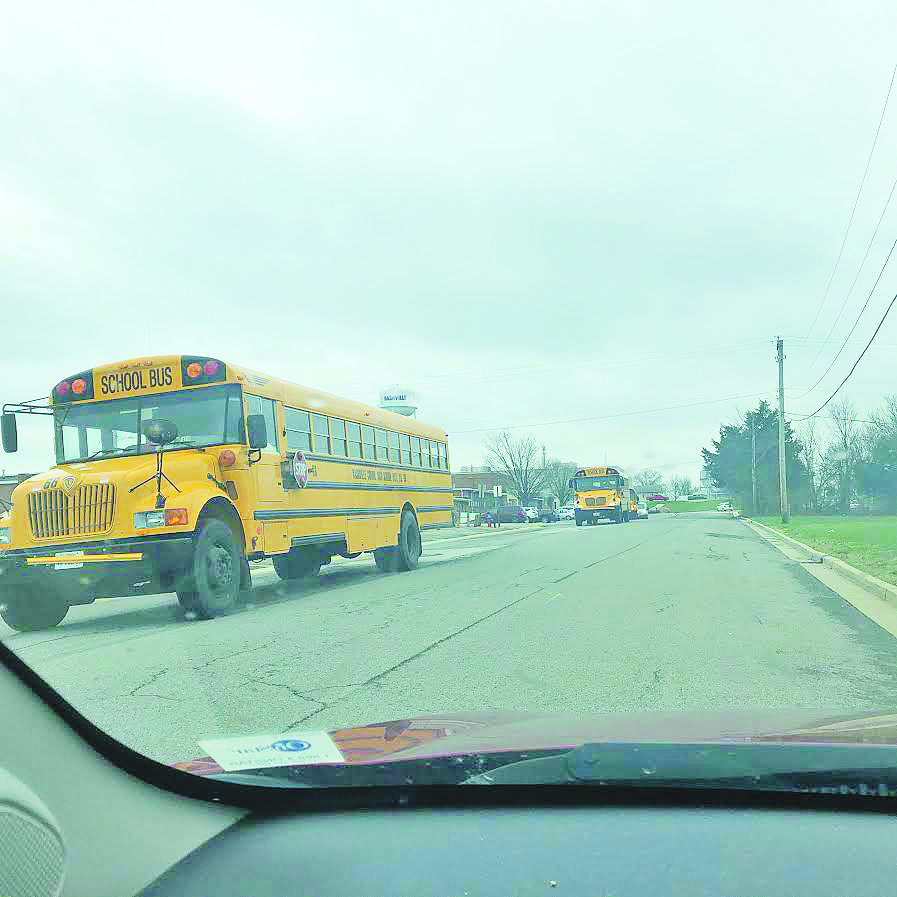 Buses depart for Nashville Primary and Middle schools on Monday afternoon, the last day for classes to be in session after a mandatory closure was put in place until March 30. (Photo By Leah Williams)

Two weeks into the last quarter of the school year, pupils from Nashville Primary and Middle School departed the grounds Monday afternoon not knowing when they would be coming back.

“It was sad watching the kids get on the bus today,” NMS Principal Chuck Fairbanks said in a tweet. “We will keep you informed of any updates when we get them.”

The statewide mandated school closure went into effect on Tuesday, March 17, and schools prepared their students with e-learning materials in hopes of continuing their education during the unexpected time off.

The extra precautions on education were put in place in hopes of keeping the spread of the coronavirus at a minimum over the next two weeks.

District 49 Superintendent Mike Brink said the school had been basing its recommendations in “two week chunks” as the health crisis evolves. The first round of precautions was to postpone planned field trips and the cancellation of school functions like the Blue and White Night but there was an idea that instituting an e-learning course may be in the near future.

“We fully expected it at some point,” Brink said. “We are probably in better shape than other districts because of the technology but it does raise the concern for the extra pressure on daycares and parents. We simply want what’s best for our kids, and we will continue to do that.”

Brink said before the announced closure by Gov. J.B. Pritzker on Friday that it was the district’s hope that any mandated time off would have been implemented at the local level.

“Our administration and our elected officials — our board — are perfectly capable of making decisions for the Nashville schools,” he said. “We have major concerns if there are mandatory closures and the extreme pressures that will be placed on parents and day care. We feel closing schools should be made on a local level.”

In a letter to parents that was sent out on Monday, Brink said he believed that a much longer shutdown is “inevitable” and that parents should prepare and plan accordingly.

Nashville Community High School called off school on Monday for a teacher institute day. Superintendent Brad Turner said the decision was made with the health of the students and faculty in mind.

“At this time, out of the utmost concern for the safety and well-being of our students and staff, we are cancelling school,” Turner said.

Turner added that at this time, there have been no changes made to the school calendar, and there has not been a decision on the last day of school or graduation. He added that information about e-learning and other updates will be given to students and parents “as more information is given to us.”

Nashville Community Consolidated District 49 learned it had received a waiver from the Illinois State Board of Education on Monday, which will allow free breakfast and lunches to all school-aged children who reside within the school boundaries.

The agreement is a partnership with the parochial schools to provide meals Monday through Friday “for as long as the mandatory shutdown is in place.”

The pickup sites for the meals will be at four places around the county: Nashville Middle School, Trinity-St. John in Nashville, St. Ann’s School and Trinity Church in Hoyleton.

If a child cannot come to the pick-up site, then parents should contact one of the schools to arrange delivery to the home.

“Nashville #49 would like to thank all of our staff for their help and assistance with this program,” the news release said. “We would also like to thank the parochial schools for helping us provide much-needed food for the children of our community during this mandatory shutdown.”