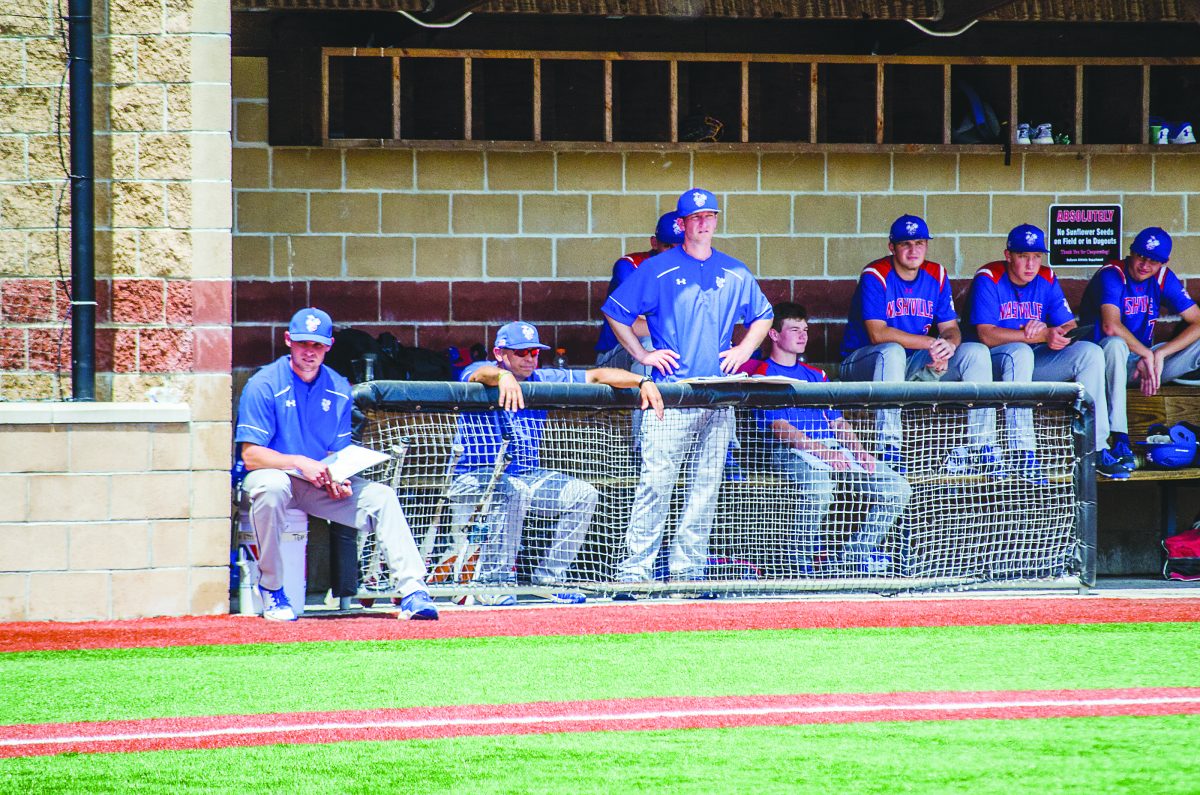 The Nashville coaches and players look on from the bench during a prior regular season game.

As our nation endures these trying times, it is important to take into account the sacrifices individuals are making in order to return to normalcy. The military, ambulance services, first responders, fire fighters, police officers in addition to grocery store and gas station associates are all jobs that come to mind when we think of not being able to put work on hold. It would also be a disservice to not include local restaurants and retail businesses who are faced with the daunting decision to close their doors or to stay open under government sanctioned restrictions. Educators who guide America’s youth in the public and private school systems, who are continuing to work strenuously to ensure their students are still receiving as much education throughout the pandemic as humanly possible should too be thought of. Best not leave out the parents who can not work from home who are scrambling to find an alternative choice of supervision for their younger children. Lastly, but certainly not least, the athletes who have had their seasons drug out from underneath them following months of hard work, preparation and much anticipation. These athletes range from all levels starting in high school to any level of collegiate participation. Seniors who may never get the opportunity to step onto a field of play again. For the Hornets and Hornettes, the magic number is nineteen. There are nineteen seniors whose baseball, softball, and track seasons will be shortened, and possibly canceled, because of the COVID-19 pandemic.

“I am hopeful that everyone stays safe and does their part to keep others safe. With track, we are focusing on getting connected through digital technology. With this, I can share relevant research and training techniques. Our student athletes have a very strong work ethic and will be ready to go if and when the season continues,” Hornet Head Track Coach Tom Taylor said.

The team has six seniors whose seasons will be put on hold. Derek Baugh, Anthony Beaty, Buddy Lamczyk, Gavin Love, Bryan Meyer, and Graham Speedie round out the senior group.

Jason Alli, the Head Coach of Hornette track admits the process has been rather frustrating.

“When the IHSA, NCAA, MLB, NHL, and others shut down all sports, my first thought was why? It can’t be that serious. I was sad, frustrated, and confused about all of it. I was thinking why are we punishing these kids by taking away their sports? Now, with all the updates around the world I see that the government is not punishing our athletes, they are trying to protect them. It’s gone way past athletics now. It’s about protecting everyone in the world. I hope things get resolved soon so we can go back to normal. I have my fingers crossed and am trying to keep a positive attitude,” Alli said.

The boy’s and girl’s track teams both kicked off their seasons Feb. 21st at an indoor meet at Southern Illinois University Carbondale but have seen two matches fall into the cancelled category due to the outbreak. Destyn Herrington, Elley Szopinski, Sydney Schnitker, Kayla Ivey, Francesca Ceracchi, and Sabrina Kollbaum are the seven seniors who could potentially be denied their senior track season.

Heading to the diamonds, Nashville Head Baseball Coach Chad Malawy offered a different perspective on the issue. He noted that while it is “terrible” for the seniors, he expressed his concern about the “trickle down effect.” For example, if many colleges offer their current athletes another season of eligibility, it could affect the high school students who will be attending the school. He also expressed concern for his junior players.

“We have a lot of junior players who are going to play at the next level, and that junior spring season is a very important season in their careers,” Malawy said.

Malawy added he feels confident many of his players are still hard at work in hopes the season will resume sooner than later. Along with offseason open gyms and workouts, the team had two full weeks of practice prior to the shutdown.

“You just wonder for how long they will be able to do stuff,” Malawy said.

Along with offseason open gyms and workouts, the team had two full weeks of practice prior to the shutdown.

“It’s sad, like I could have had my last game as a Hornet and not even know it. But there’s nothing we can do about the whole virus besides stay inside and pray we get to resume back into spring sports. I just hope baseball doesn’t get cancelled in general,” Nashville Senior Terry Pelczynski added.

Pelczynski echoed Malawy’s statement when asked what assortment of activities can the athletes do in their own time.

“Continue to play catch and go take reps on the field, but no coaches can be in attendance,” Pelczynski said.

The Hornets were coming off a season where they collected 30 wins to only 7 losses, coming only one game shy of the Super Sectional after losing to Harrisburg in the Sectional Championship. Pelcyznski and Jacob Rounds are the two seniors on the baseball team this season.

Sean Renth, Head Coach of the Hornette softball team, also expressed his thoughts on the matter in an interview conducted on March 15th.

The softball team started practicing March 2nd and were four days away from hitting the road to play Trico in their first game of the season when the news broke. Their last practice was Saturday, March 14th, as was the boys baseball team’s. The team was able to squeeze in twelve practices before the season came to a screeching halt. Following the conclusion of the season, the team will graduate Kyleigh Guinzy, Taylor Hicks, Olivia Cook and Addi Gale.

In hopes the season resumes at some point, it is unclear as to what will happen in regards to the games being played.

“With college they already know what’s going on, but we wake up every day not knowing whether or not we are going to play,” Malawy said.

Coach Renth explains he is going into the pandemic with a “day by day” and a “week by week” mentality. Although there is a level of optimism amongst the Nashville faithful, the level of uncertainty surrounding the seasons of their beloved Hornet and Hornettes continues to hang over their heads.