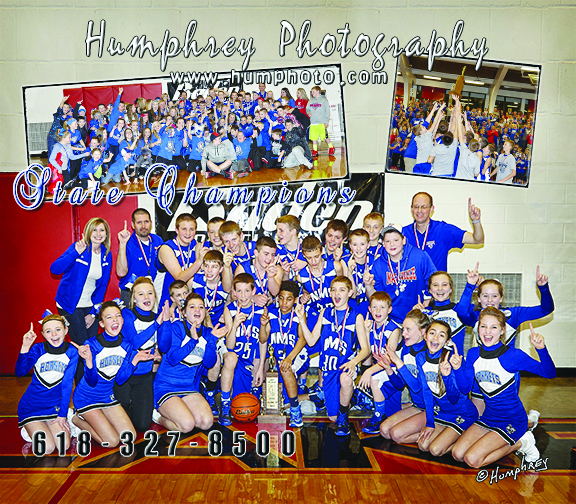 As the level of uncertainty  regarding sports continues to loom large, we will take a look back on some of the best teams Washington County has had to offer. We start by traveling  roughly five years back in time to 2015.

Jr. Hornet Head Coach Will Reinburg along with Assistant Coach Pat Heseman are preparing to lead a pack of junior high basketball players to a State Championship. Little did they know the team the season would turn out in that manner in which it did. The team set a Nashville Middle School record following a season where they managed to compile a stellar 27 wins. They were able to win each of their games by at least twelve points in route to their perfect season.

After toppling their cross county rivals, the Okawville Rockets, in the Regional Championship game at Kinmundy, the team began their march through state by defeating Gallantin County 41 to 29 in the opening round of the Class “M” State Tournament.  Following a 41 to 22 victory over Aviston in the Semi-Finals,  the Hornets were heading for the State Championship in search for their record setting twenty seventh victory.

As they did in the Regional Championship, they found themselves up matched up against a familiar foe. In order to collect the big prize, they would have to go through Pinkneyville.

Succeeding a night where the tandem of Bryce Bultman and Carson Parker combined for 38 of Nashville’s 49 points, the Hornets were able to make the long bus ride home with a State Championship trophy.

Fast forwarding roughly three years, and much of the group was able to continue their magic. Bultman, Parker, Anderson, Hercules, Morris, Bergman, Kabat, and Shubert were all part of the 2018-2019 State Runner-Up squad. The group was able to experience another season where their team broke the school’s win record. That year the Hornets tallied 35 wins to only 3 losses.

Coach Reinsburg said: “Probably one of the hardest working teams I have ever coached. Very unselfish group. They were very smart players and I felt like we were always prepared for anything someone threw at us. Also were very deep that year. Played several kids. As the season went on you just had a feeling that those kids were not going to let anyone beat them. We had a few games that were close but we did what we had to at the end and won every game by double figures.”