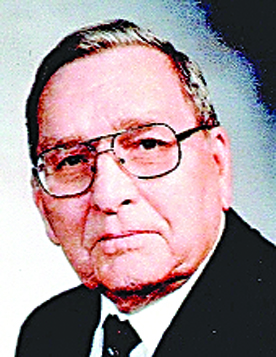 Fred Palmer Beckman
September 10, 1925 – March 7, 2020
Palmer Beckman, of Lone Oak passed away at 8:39 a.m. Saturday, March 7, 2020 at Morningside of Paducah. He was born September 10, 1925, in Washington County, Illinois to Fred Henry and Martha (Decker) Beckman. He was baptized into St. John’s Evangelical Church in Cordes, Illinois in infancy, and was confirmed when he was fourteen years old. Immediately after graduation from Nashville Township High School, he was inducted into the US NAVY. He received his boot camp training in Farragut, Idaho. As Pharmacist Mate Third Class, he was assigned to serve on the USS COMFORT during World War II. The USS COMFORT, a hospital ship, evacuated wounded servicemen from bloody Okinawa and other South Pacific Battle Arenas. On April 28, 1945, at 8:58 pm, a Japanese suicide plane rammed the fully lighted, side of the ship killing 29 passengers and crew and wounding 33 others. Beckman was on the deck just below the large hole made by the plane which was lodged inside the ship. He was nineteen years old at the time.

After the War, he attended University of Illinois at Champaign for one year before coming to Paducah to work at the Gaseous Diffusion Plant for the next 37 years. Mr. Beckman was a volunteer fireman for 48 years at the Lone Oak Fire Department and was Assistant Chief for many of those years.