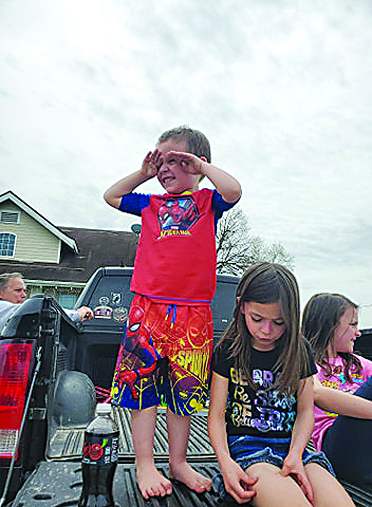 What started as one mother’s suggestion for a birthday celebration for her son turned into an impromptu drive-thru parade of well wishes from the Hoyleton community.

Jennifer Luckey said she became concerned with how to host an event for her now 5-year-old Jensen a few weeks ago. Jensen has been diagnosed with cystic fibrosis, so the idea of social distancing has already been in practice in the household during cold and flu seasons because of the complications viruses can have on his immune system.

Even with that, it was hard to explain why this birthday was different because of the coronavirus concerns.

“I had just had a party for my oldest, and he was asking about a party,” Luckey said. “I thought that may be if we could have a few friends and family come by, and we could sit outside, then we would be fine.”

A few phone calls were made, a promise for one fire truck turned into a fleet of vehicles that came out for the young boy’s special day. Mom and grandfather Shawn Claybourn stepped in.

The parade started in the parking lot of Kretzer’s Bar and Grill, and with the invites on Facebook, there were multiple trucks from the Hoyleton Fire Department, Centralia Collision Center, Jerry’s Towing, United Response Ambulance and others who cruised through the downtown and past Jensen’s home. Staff and students from Jensen’s school, Trinity Lutheran in Hoyleton, and a motorcycle club also participated in the parade.

Jennifer Luckey said his soon-to-be-stepdad even made sure he had a new Spider-Man outfit to wear for the occasion. She said her son watched the parade from the bed of a pickup truck and could hardly contain his excitement the entire time.

“Jensen loved it,” she said. “He was hopping up and down and screaming, ‘This is so awesome!’ He was on cloud nine. He had such a wonderful day.”

A video was made live on Facebook for family members who couldn’t be there to see the special birthday parade.

Luckey said she was grateful to everyone for helping make the day special for her son.

“It turned out that there were people I didn’t even know, people from as far as St. Louis were there,” she said. “Everything was wonderful. We are so thankful.”

For more photos and to see video from the parade, check out the gallery below.