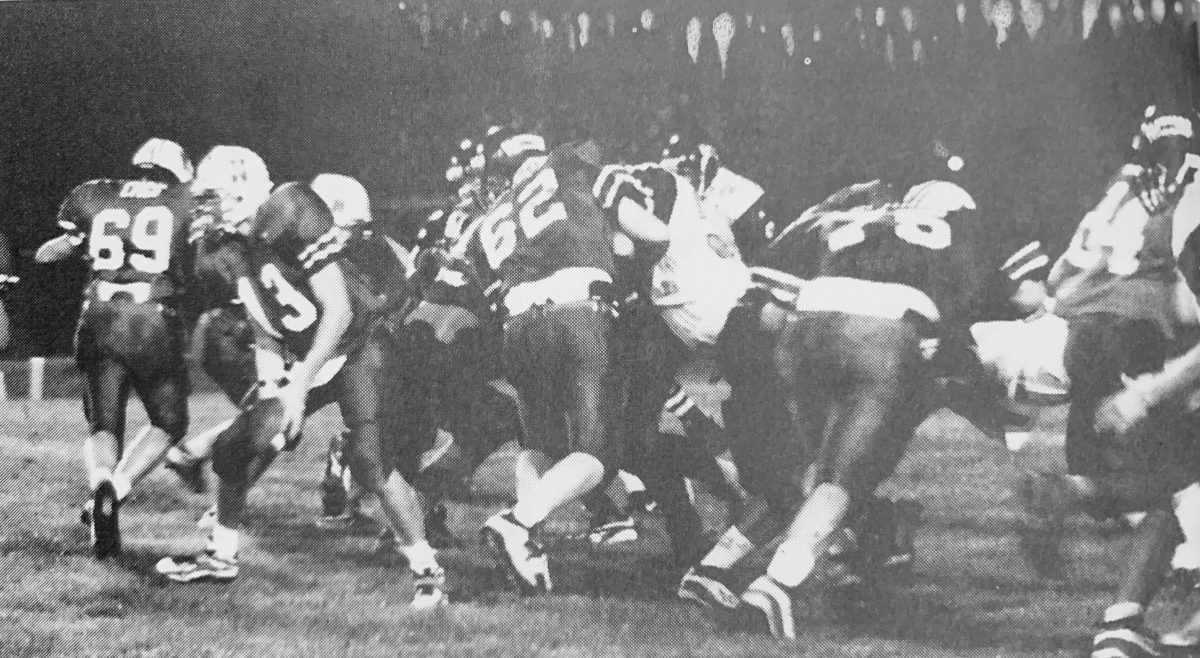 The Hornet offense competes in a game during the 1998 State Runner Up Season. The offense was primarily run heavy

As the memory of a State Championship birth for the Hornet football team remains fresh in our minds, it is time to take a walk down memory lane and remember another State Runner-Up. It is the Fall of 1998, and Head Coach Bruce Reeder is coming off of a season where his team won ten games but fell short against Harrisburg in the State Quarterfinals by a score of 45 to 0. Kelly Cruser, a senior, was coming off his second season of varsity action and his first season as the team’s starting quarterback. While Cruser noted the expectations for their class were always “really high,” in every sport, there was a different feel about this team.

“They weren’t necessarily extremely high, not compared to the ones for next year’s team. We did have a lot of defense starters return,” Cruser said.

Cruser also explained how enjoyable it was to play under the coaching staff.

“I was also with Coach Bro (Browiak) a lot because he was the offensive coordinator. I kind of grew up with him because me and son were friends. I really enjoyed playing for him,” said Cruser.

The Hornets resided in the Southern Illinois River to River Conference where they played in the Mississippi Division. The season’s regular season opponents consisted of Hillsboro, Mater Dei, West Frankfort, Pinckneyville, Anna-Jonesboro, DuQuoin, Sparta, Chester, and Freeburg. Following five straight wins to open up the season, the Hornets traveled down to DuQuoin to take on the Indians. At the time, both teams were ranked among the top ten in the state. The team was able to pick up a 20 to 14 road victory and moved to 6-0 on the season. Not only was it a marqui win for the team and their undefeated season was kept alive, it may  have been the win the team needed to get over the top. When asked at what time during the season State Championship aspirations became a reality, Cruser pointed to this game.

“When we beat DuQuoin at DuQuoin,” Cruser said.

As any coach would, Reeder maintained the “not look too far ahead” mindset. Upon hearing Cruser point to that moment, Reeder chuckled.

“ The DuQuoin game was a big win for us. There were a lot of big plays in that game,” Reeder said.

The 20 year head coach noted a couple different moments in the game including a blocked punt by Justin Morris as well as Cruser’s ability to pick up big gains on run option plays.

After picking up the win over the Indians, the Hornets were able to win their last three games to finish the regular season with a perfect 9-0 record. Their first opponent in the postseason was Shelbyville.

“We knew we were the much better team, but they continued to battle and make things tough for us. I knew we were going to win the game though,” Reeder said.

“That was a tough game for us,” Cruser said.

The team went on to win the contest 21 to 19. The win over Shelbyville set the team up in a rematch with Mater Dei, a game the team would go on to win 14 to 0.

“Mater Dei was the big one. The first time we played we won 19 to 13, but none of us felt like we should have given up 13 points. The funny thing about them (Mater Dei) was they had only lost two games that season, both to us, so they were undefeated when they weren’t playing Nashville,” Reeder said.

As mentioned before, the Hornets were eliminated in the State Quarterfinal the prior year by Harrisburg. They had a chance at redemption in 1998. During the 1997 season, Coach Reeder recalled six to seven inches of snow falling the week before the game, and the day of the game itself was extremely cold as well.

“That was a get even game for us, and we took it to them,” Reeder said.

After defeating Macomb 28 to 7 in the State Semi-Final round, the Hornets found themselves in the State Championship game against Kaneland. Located in Maple Park, Illinois, the Knights featured wide receiver PJ Fleck. Fleck, who played for the San Francisco 49ers and is currently at the helm for the Minnesota Golden Gophers football team, was part of a team who had not lost a game in nearly two seasons. The Knights had won state the prior year after finishing the season 14-0 and were primed for a repeat.  During that time, the championship game was played at Illinois State University instead of Northern Illinois University. It was a homecoming game for Coach Reeder, who played his college ball for the Redbirds. The two teams went into the half knotted at seven points apiece.

The halftime score had the Hornets “feeling pretty good,” but the second half painted a much different picture for Nashville.

“We felt pretty good at halftime, but I guess they went in there and fired themselves up,” Reeder said.

The Knights were able to score fourteen unanswered points in the second half and were crowned back to back State Champions following a 21 to 7 victory.

“They were able to shut down our offense, and that was something we hadn’t seen all season,” Reeder said.

Cruser, who was happy with the way his team battled throughout the game, explained “we just ran into a good team, they were bigger and more physical.”

While the Hornets were sent home defeated, the experience of playing in the playoffs offered some perspective for the Runner-Up Hornets.

“It’s always a dream to coach in that game, it’s a lot of fun to play in the big game” Reeder said.

Both Cruser and his former coach expressed how taken back they were by the experience of coaching and playing in the postseason, especially in a small town.

“There is something different about it, playing in those afternoon games. It’s a great experience,” said Cruser.

Along with a Runner-Up trophy, the team was also able to collect several individual accolades as well.

“How it went was usually the team would move it on us early in the game, and then we wouldn’t give up much,” Reeder said.

When asked the all important question of what separated this team from the rest, Reeder explained “they just had confidence they could get things done.” 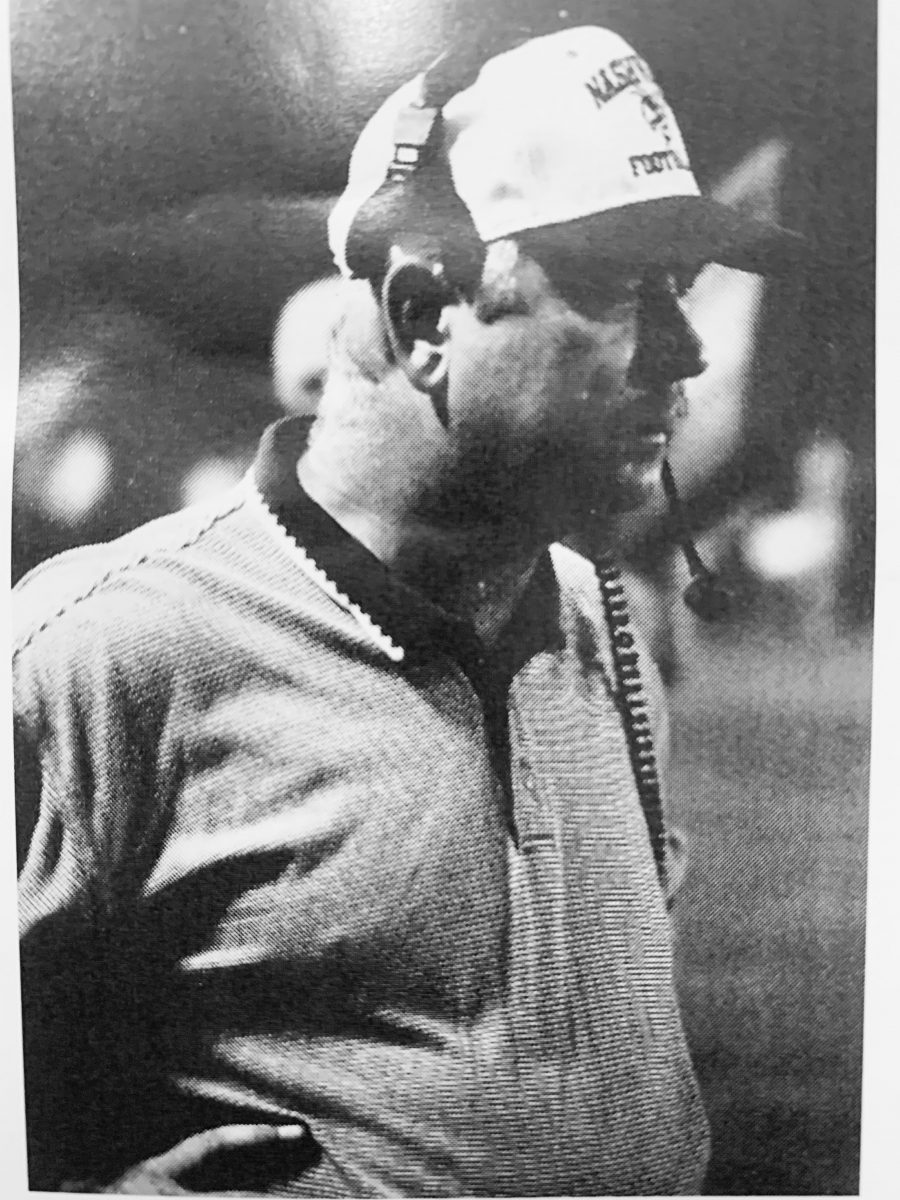 Head Coach Bruce Reeder looks on during his team’s game during the ‘98 season. Reeder served as Head Coach for 20 years. Below: A Nashville player kicks an extra point during a game.