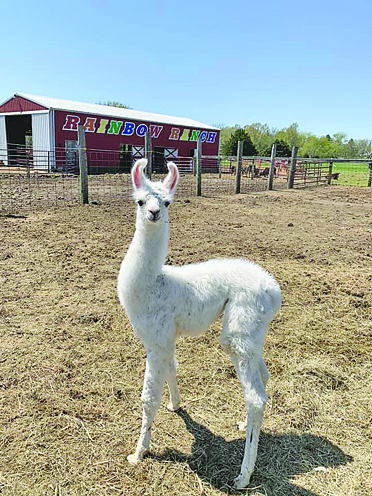 Lily the llama was born on Easter Sunday. She is one of the animals at Rainbow Ranch.

Alan Blumhorst was having trouble sleeping.

The owner of the Rainbow Ranch Petting Zoo, west of Nashville, was worried about how he was going to feed his animals. The current restrictions surrounding the coronavirus pandemic have caused him to close his ranch to the public, just as things would normally be picking up and visitors would be coming in for tours.

“I wanted to say we can make it through somehow,” Blumhorst said. “So I swallowed my pride and decided I would do it.”

So the Feed the Critters Facebook fundraiser was launched, and in less than a day, the community responded and met the $5,000 goal.

“I was blown away,” Blumhorst said. “I feel so blessed. They would tell stories about bringing their grandkids there. Everyone was saying we can’t wait to have you back. Every time I checked it there was more money in there. I had tears in my eyes.”

The community ended up donating more than $8,000 through the social media platform.

Other donations have included $1,000 through the popular money-sharing site venmo. The money ranged from $10 to hundreds. One person gave $500. There was also another individual who knew where Blumhorst bought his feed, so he placed a $300 credit for the animals.

Blumhorst said he is offering virtual tours through the ranch’s YouTube page, which gives people a chance to see the various animals on the farm.

Blumhorst said he was incredibly thankful for everyone who donated to help during this difficult time. After all he rest easy now knowing that his animals will be taken care of.

“I can sleep now. I just can’t believe how much people wanted to make sure that we made it until we could open again,” he said.

Web exclusive: Blumhurst posted pictures on his Facebook page thanking his followers for his “happy and fed animals.” Here is a gallery of those critters.

Check out Rainbow Ranch on YouTube for virtual tours of the farm.