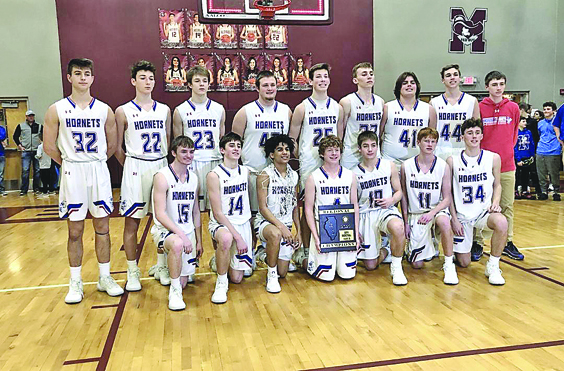 Although the ailment has put a stoppage on the school year and all spring activities, the Hornet basketball team still found a way to celebrate their 2019-20 season. Even with the banquet being canceled due to COVID-19 restrictions, the team still managed to hand out their annual awards. The Hornets began their campaign by winning four straight to claim the Mascoutah Tip-Off Classic Tournament Championship. The team won nine out of their first eleven contests before the Mater Dei Holiday Tournament, a tournament in which they were awarded second place, respectively. A few weeks later the team won the Nashville Invitational Tournament following a two point win over Mater Dei, the same team who downed the Hornets in the Mater Dei Tournament finale. The Hornets closed out the regular season by winning five of their next seven before heading into the Red Bud Regional. After collecting victories over Wesclin and Althoff, the Hornets were crowned Regional Champions. Four days later, the blue and white traveled east to Hamilton County High School for their first game in the Sectional. It was a revenge game for the Hornets, as they were matched up with Benton, a team who had beaten the Hornets at Assembly Hall earlier in the season on a last second runner. Needless to say, the team took care of business in the form of a convincing 27 point victory over the Rangers. The only opponent standing in the way of Nashville and the Sectional Title was Murphysboro. Unfortunately, the Hornet’s postseason run came to an end that Friday night in McLeansboro following a ten point loss to the Red Devils. Even though the loss spelled the end for the Hornets, the team finished the season with a record of 28 wins and 7 losses and 10 and 1 in conference play. Carson Parker was named the team’s Most Valuable Player. Parker also took home All-Conference, All-South, All-State, and IBCA Honorable Mention AP All-State. Tristen Hercules collected the Assist Award while too making All-Conference. Terry Pelczynski won the Eddie Kemper Free Throw Award after shooting 71% from the line his senior season. Pelczynski, like his fellow seniors, was awarded All-Conference as well as All-South. The Hornet Award was distributed to Neil Kabat, Matt Anderson, and J.D. Shubert. Buzz Ritzel received the Most Improved Award. The Letter Winners were Anderson, Parker, Shubert, Kabat, Pelczynski, Hercules, Bryce Donato, Jaxson Goforth, Isaac Turner, Nolan Heggemeier, and Ritzel.