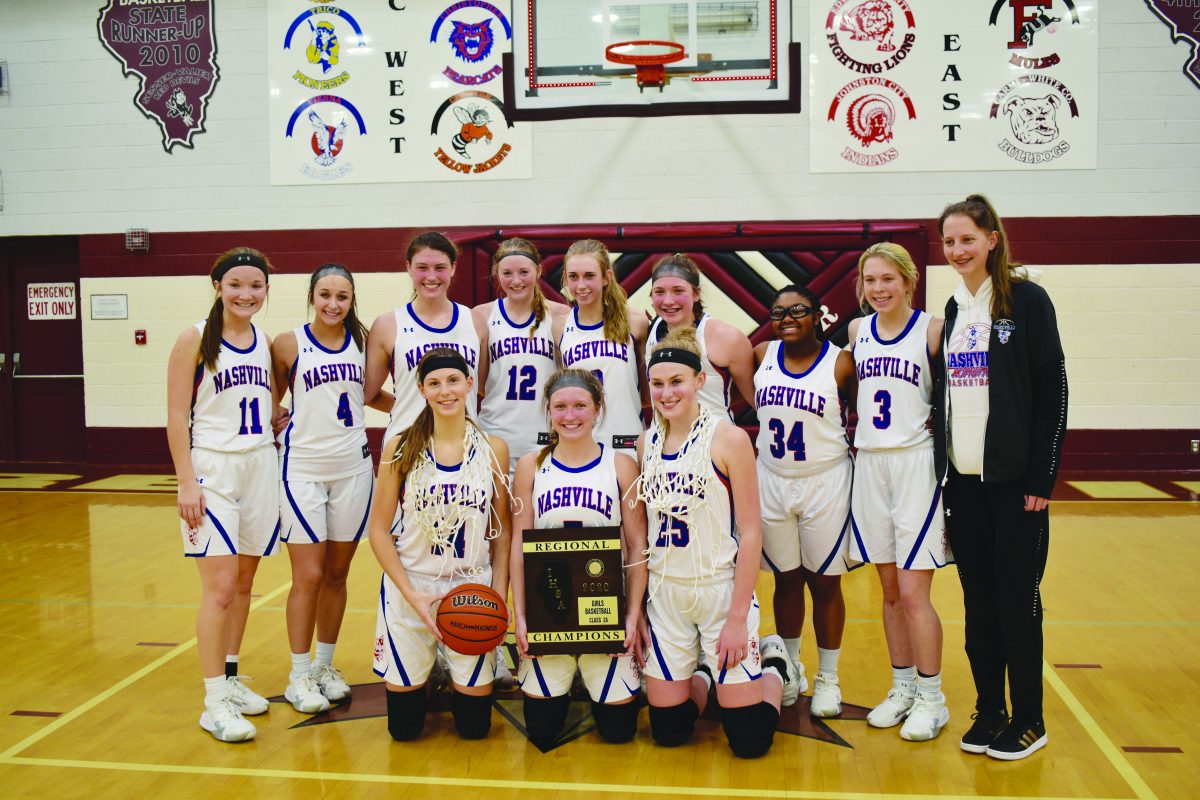 The Hornette basketball team was honored recently for their efforts throughout the 2019-2020 season. Sabrina Kollbaum, Rylee Luechtefeld, and Olivia Cook were the three seniors on the squad. The Hornettes began their season by finishing second in the Nashville Invitational Tournament with a 3-1 record. Following a loss to Collinsville in the deciding game of the tournament, the group went on to win their next six games and seven of eight overall before the Christmas break. The 10-2 record put them as seven seed in a loaded field in the Mascoutah Tournament where the team finished 2-2 and was awarded fourth place. The week was highlighted by a thrilling win over number three seeded East St. Louis. The Hornettes were able to rattle off six straight wins after the tournament before collecting a win in their first contest of the Highland Tournament over Belleville East. The team dropped their next two games at Highland, ending the tournament with a 1-2 record. The group had their struggles at the end of the season as they lost four out of five before collecting a convincing win against DuQuoin on Senior Night. The postseason for the Hornettes kicked off at Sesser-Valier against Trico. Quick work was made of the Lady Pioneers in the form of a thirty two point victory, and the team found themselves matched up with Pinckneyville in the Regional Title game. Rewinding to nine days prior. The Lady Panthers defeated the Hornettes by sixteen in the Panther’s den. It was a forgettable game for Nashville, as the team only scraped together fifteen points and had two quarters where they failed to score points. The Hornettes displayed their resiliency, and the team was crowned Regional Champions following a 42-28 victory over their conference foe. The team traveled to Carterville four days later for their first battle in the Sectional round. An eight point win over Harrisburg set Nashville up with their third tussel of the season with Carterville. The Lady Lions won the previous two contests. The “third time is a charm” saying did not fall in the Hornette’s favor on that Thursday evening in Carterville, and the team witnessed their season come to a close following a 54 to 42 loss. The overall record for the season was 24 wins and 10 losses. Emily Schnitker, Jordan Donato, and Halle Rueter all received the Most Improved Award. Alyssa Cole was the team’s leading rebounder as well as the top shooter from the free throw line. Seniors Luechtefeld and Kollbaum took home Co-Defense honors, while Cook collected the Hornette Award. Sabrina Kollbaum was also named the team’s MVP.