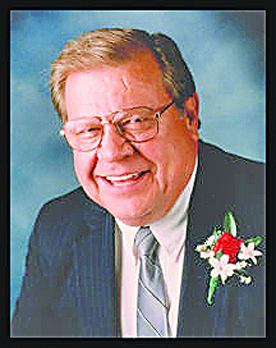 Mr. Aaron Adren Swinford, long time resident of Nashville, IL, lost his battle with Alzheimer’s Disease at Carlyle Healthcare Center in Carlyle, IL on Tuesday May 5, 2020.  He had attained the age of 85 years, 2 months and 23 days.

Aaron was born February 12, 1935 in in Coles County, Illinois, to Ruby Sophia (McGrew) Swinford and Albert Adren Swinford.  Aaron was the seventh of their eight children.  After high school, Aaron joined the Navy where he learned leadership and technical skills that aided him in being hired by IBM.  It was during his enlistment he met and married Gertrude (Trudy) Swinford.  Together they had Michael, Matthew and Monica and later divorced.  He then was united in marriage to Rose Kahrhoff in 2003 at the Milkpail Chapel in Dundee, IL and she survives his passing.

Aaron took early retirement from IBM to obtain his Associates degree from Kaskaskia College.  He then started Aarodon, a computer and accounting business with his brother Don Swinford.  Next he was an employee at Swinford and Palmer, of which he later bought and created Swinford Accounting, where he and Rose worked until his retirement.  In addition to the accounting practice, he was instrumental in founding the Nashville Chamber of Commerce and became President, owned a Chrysler dealership, was an advisor and instructor at Kaskaskia College, owned a Phillips 66 gas station, and Swinny’s Lounge.  Upon retirement, he was an IRS volunteer and he volunteered at the local nursing home to sing to his many friends.  He spent his spare time with his grandchildren, had a passion for gardening and singing in the church choir.

Should friends desire, memorials can be made to the Carlyle Healthcare Center or the Hospice of Southern Illinois and will be accepted by the Campagna Funeral Home, who is assisting the family with arrangements.