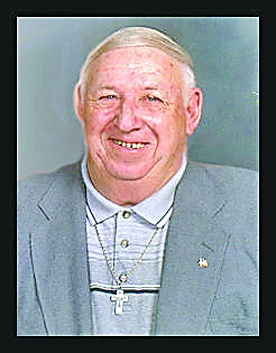 Duke was born on July 26, 1939 at Nashville, IL the son of Ralph W. and Helen (McBride) Snyder.  He was united in marriage to Margaret Brammeier on February 22, 1958 and she survives his passing.

Duke served with the United States Navy.  He worked at McDonnell Douglas in St. Louis, MO for many years and then as the manager for Hydraulics Incorporated in Nashville, IL, until his retirement.  Duke was a member of the Grace United Methodist Church, Nashville Lions Club, Nashville Jaycees, Washington County Sportsmen, AMVETS, Nashville Men’s Bowling League and Nashville Men’s Golf League.  Duke enjoyed attending and watching all the high school sports.

He was preceded in death by his parents, brother James Eberhart, brother-in-law and sister-in-law, Kenneth and Grace May, aunt and uncle Fern and Lester Williamson.

Due to the COVID-19 health concerns, a private graveside service will be held at the Masonic Cemetery in Nashville, IL with Rev. Bill Bunnage officiating.  There will be a public memorial service held at a later date.

Should friends desire, memorials can be made to the NCHS Sports Boosters or the NCHS Music Boosters      and will be accepted by the Campagna Funeral Home, who is assisting the family with arrangements.

Online expressions if sympathy can be made at www.campagnafuneralhomes.com.