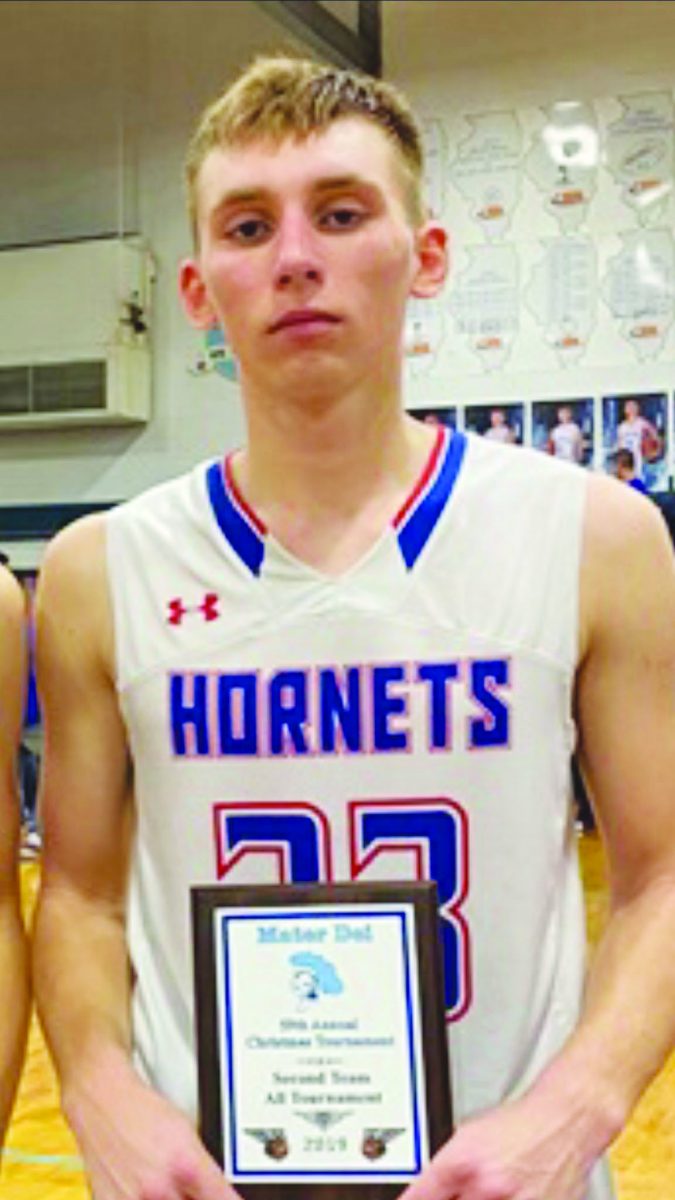 Coming off a season where he made the All-Conference as well as the All-South teams, Hornet basketball player Terry Pelczynski is taking his talents to the next level. Instead of playing his home games at Assembly Hall, his new home floor will be James “Hummer” Waugh Gymnasium at Rend Lake College.

“Terry brings a lot of versatility and ability to shoot the basketball. Terry is a winner and is a huge addition for our program,” was a statement put out Thursday night from the Rend Lake College Basketball Team’s Twitter page.

For Pelczynski, the interest to become a Warrior began quickly after the recruitment process began.

“He said he knew I was going to do stuff right and play hard since I played for Coach Harre,” Pelczynski said.

Pelczynski was also drawing looks from Kaskaskia College, but his comfortability with newly hired Rend Lake Head Coach Brian Gamber was a big factor in his decision to attend Rend Lake.

“I’ve always known Coach Gamber from when he coached at Woodlawn. I liked him as a coach. I also have a couple friends going there to play, so I thought it would be fun to go play with them,” Pelczynski said.

Nashville Hornet Head Coach Wayne Harre harped on Pelczynski’s work ethic and how it will help him excell at the next level.

“His work habit was really good. He was always one of the last ones to leave the gym after practice. He’s a guy that was always cheering for his teammates,” Coach Harre said.

Harre mentioned some of the activities included shooting competition drills amongst him and teammates. Throughout his tenure as a Hornet, Harre noted one of the other qualities which stood out about the 6’5 Warrior commit was his ability to come through in big moments.

“He hit a lot of big shots for us,” Coach Harre said.

In particular, Harre mentioned a three pointer Pelcyznski hit in the Super Sectional during the 2018-2019 season against Teutopolis which “got his team going.” Another instance Harre pointed out was the three pointer he hit this season against Okawville. With just seconds remaining on the clock, Pelcyznski was able to drain a three to send the game to overtime; a game in which the Hornets ended up winning. The fondest memory Pelcyznski has of sporting the red and blue ties in with the Super Sectional shot, as Pelczynski highlighted the State Tournament shortly after.

“When we got second at State my junior year because my dad and I used to always go up there and watch games. To make it up there as a team was just a phenomenal experience,” Pelczynski said.

As mentioned before, Pelczynski was always one of the last players to leave the gym following practice. The extra work has paid dividends, as Harre believes Pelczynski’s biggest strength at the collegiate level will be his ability to stretch the floor and shoot from behind the arc.

“When you can shoot the ball like that, you’re going to have a chance. He’s a good catch and shoot guy, and he gets the shot off pretty quick,” Coach Harre said.

As expected, the transition to the next level comes with adjustments. Pelczynski, along with Coach Harre believe ball handling and strength will be something Pelczynski will look to improve on, but the work ethic is there to accomplish those feats. When the Warriors hired a new coach, he called Coach Harre because he was “really interested” in the former Hornet, and he was looking for a player with good character. Pelczynski is most looking forward to meeting new friends as well as being exposed to the better competition the college level has to offer. He was wanting to go into something related in applied science.