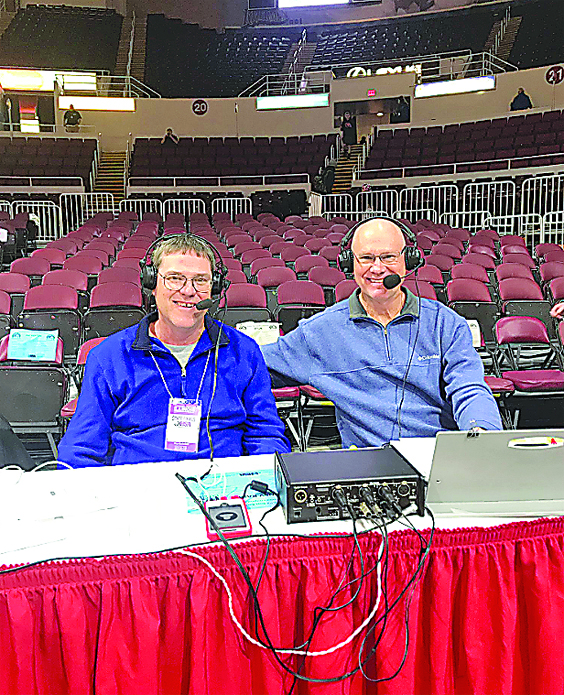 Beefcake McClay and Bo Meyer get set to call a game at the State Tournament. The tandem called games together for 35 years and they have both been enshrined in the Illinois Basketball Coaches Association Hall of Fame.

We have come to the end of an era. Following 42 years at Withers Broadcasting, Brad “Bo” Meyer has decided to call it a career. The longtime voice of Nashville sports made his decision public on Friday during “The Washington County Report,” a daily segment which airs on WNSV.

Meyer began his career with Withers Broadcasting in May of 1978 working for WMIX in Mt. Vernon before coming to WNSV in the Summer of 1994.

“I just figured it was time. I wanted to get out while I was still sounding the same,” Meyer said.

When Meyer began his career, the Hornets were fresh off of a State Championship under Head Coach Bob Vogel. Meyer, along with color man Brad “Beefcake” McClay, knew before the 2019 football season started their announcing days were numbered. The two worked together for 35 years, as Meyer worked with Rick Harre the first seven years of his career. Ironically enough, his final year with Withers Broadcasting ended the same way it started; the Hornets were playing in a State Championship game.

“That was great, wasn’t it?” Meyer said.

As the State Runner Up Hornet football team filed into Assembly Hall last fall to be welcomed home, it was Meyer who kicked off the festivities with a speech. At the time, nobody knew of his decision, but the secrecy did not go without some hints.

“During that speech, I mentioned for personal reasons this was my favorite season that I remembered.” Meyer continued, “I’ve spoken with Coach Kozuszek, and he said “that kind of sounded like a retirement speech,” Meyer said with a chuckle.

Due to the COVID-19 pandemic, the broadcaster’s career ended slightly earlier than he expected. Meyer and McClay were calling Mater Dei’s Super Sectional game and were on their way home when reality set in.

“Beefcake looked at me and said Bo, we just called our last game,” Meyer said.

The most rewarding part of the job for Meyer has been being around the kids as well as the opportunity to have conversations with friends.

“You know how it is, I just like talking to people. I’ve become friends with all of the coaches,” Meyer said.

He also explained how special it was to be able to have the chance to call his son Blake’s games during his time as a Hornet. State Tournaments were another favorite of his.

“I always loved State Tournaments, whether I was broadcasting or just there to watch,” Meyer said. The last State game Meyer called was in 2019 when the Hornets were playing Chicago Orr in the State Championship.

He credits former St. Louis Cardinals broadcaster Jack Buck for his decision to go into broadcasting. His employment through WMIX enabled him to get into games for free with the use of a press pass. Meyer had the opportunity to be around his idle as well as go into the locker room after the game.

“I just wanted to watch him and be around him, I wanted to emulate what he was doing,” Meyer said.

Yes, the two were on a first name basis, as Meyer was able to meet him “several times.” Meyer recalled an instance between the two that brought laughter to the conversation.

“He called me Brett instead of Brad. Some of the other guys were like, did he just call you Brad? I said yeah, but I’m not going to correct Jack Buck. If he knows me as Brett, then I’m Brett,” said Meyer.

As for retirement, Bo’s plan is to become a substitute teacher. Even though he made it clear his public speaking days are over, he will still continue to be a Sunday School teacher at St. Paul’s United Church of Christ in Nashville, a position he has held for 40 years. While he will not be calling games, he noted he will still be in attendance at many of the sporting events.

“The only exception I’ll make is for my church,” Meyer said.

The 42 year radio personality will officially call it quits on Friday, May 29th.

“I just want to thank everybody, and God,” Meyer said

For more about Bo and Beefcake, be sure see our website for the full verson of this article, www.nash-news.com