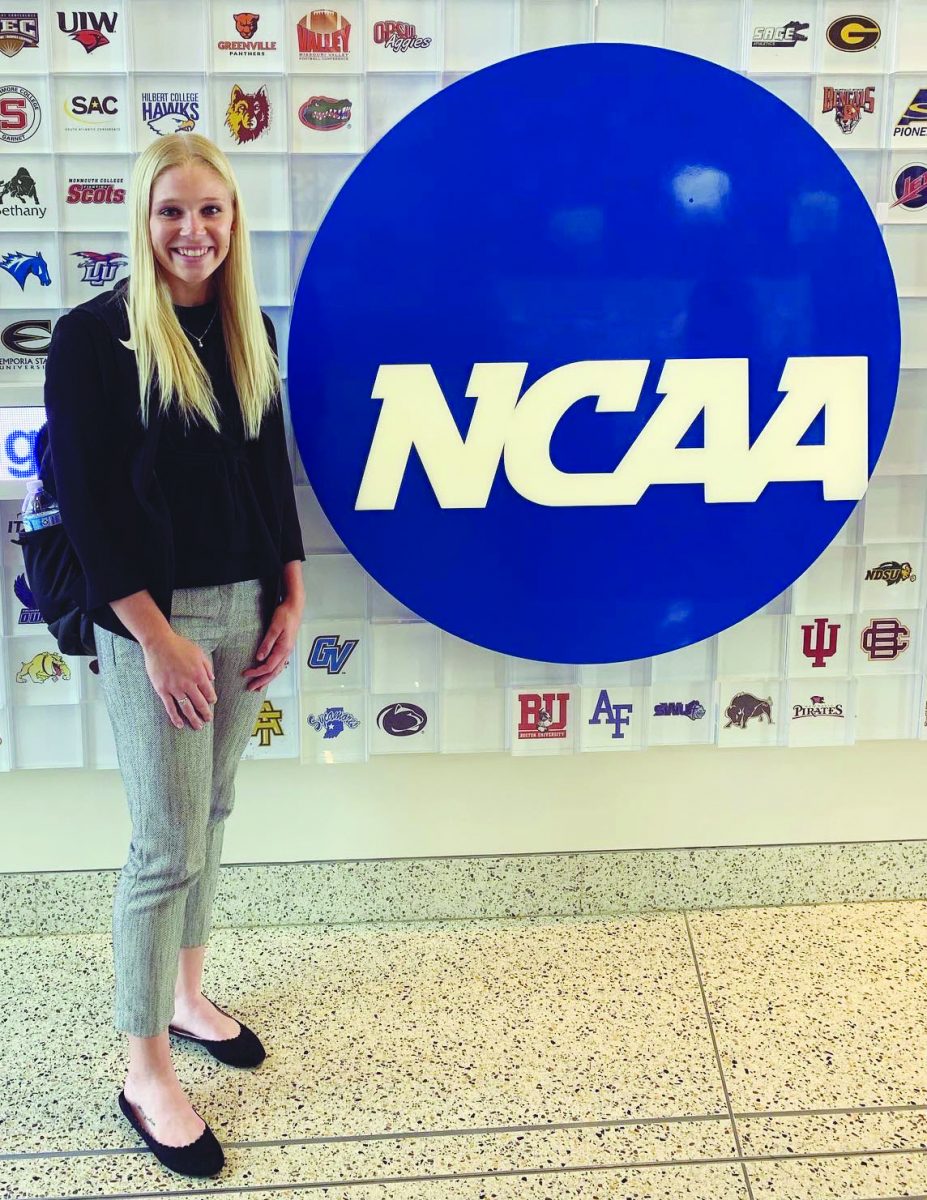 Left: Mackenzie McFeron at the National College Athletic Association (NCAA) Headquarters located in Indianapolis, Indiana this past fall. She was there serving as a replacement for the position she was recently assigned to on the SAAC. McFeron is a 2018 graduate of NCHS and currently attends Evansville University in Evansville, Indiana where she plays softball for the Purple Aces .She will hold her position on the committee from June 1st until May 31st, 2022.

Another former Nashville athlete is accomplishing big things at the next level. This past week, current Evansville Purple Ace and former Hornette softball player Mackenzie McFeron was named the Missouri Valley Conference’s representative on the Division 1 Student-Athlete Advisory Committee. She is one of thirty two representatives on the committee, as every Division one conference each has their own.

She described the main responsibility of the SAAC to be “enhance the student-athlete experience.” They also come up with potential legislation proposals and present those ideas in front of the SAAC. The ideas are then presented to the Leadership Council. Usually committee members are fifth year seniors or graduate students. Although McFeron is only a Sophomore, her prior experience had her confident she could thrive in her new role. Her freshman year was the first time she attended a SAAC meeting. Her Sophomore year, her coach recommended her to be the female representative on their campus. She was first able to get her feet wet with the National Committee this past fall when she filled in as a replacement in Indianapolis. It was then McFeron knew there was a chance she would be back.

“Everyone there was asking me how old I was and when I told them I was just a sophomore, they said to be excited because I was probably going to get selected. It gave me excitement,” McFeron said.

Although she remained optimistic, as time went on McFeron  became unsure of the circumstances. Part of the application procedure was to submit an essay where the candidate is expected to explain why they would be a good fit as well as give a summary of themselves and their accomplishments. It took a bit longer than expected before McFeron heard anything back. Last week, she was given the news she had been waiting for as she received the long awaited email.

“I was honestly surprised, I hadn’t heard anything for a while,” McFeron said.

As mentioned before, there are 32 representatives, one from each conference. McFeron noted it is a very diverse group as they have different genders as well as different ethnicities. The committee meets once a week every week online and once per month in person. During the summer, they meet in Indianapolis as well as go to different events year round. It will give her an opportunity to travel to different parts of the country throughout the year. The year is highlighted by a convention in January, one which lasts a week. The location of the event differs from year to year, but McFeron mentioned it had been held in places such as Indianapolis and last year it was held in Anaheim, California. The 2018 graduate of Nashville Community High School will begin her term on  June 1st, and it will last until May 31st of 2022. She will be going into her Junior year at Evansville University. On the softball field, she serves as the team’s utility player. Her freshman season was spent in the outfield, but she had been practicing more in the infield as of late. She will be graduating in 2022 with her Masters Degree in Health Services Administration.