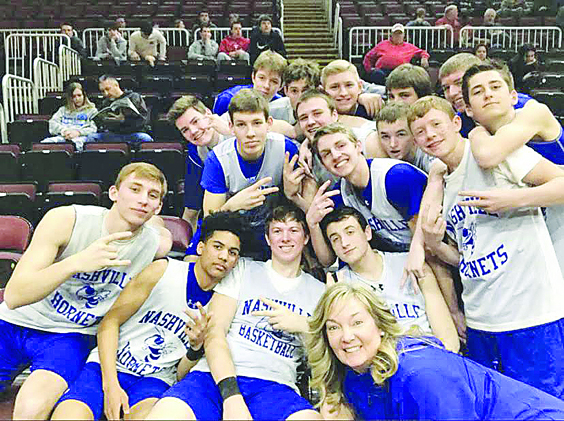 For the first time since the 2014 season, the Hornets found themselves back at the Peoria Civic Center with a chance to return to glory. With several key contributors returning to the rotation, the expectations were sky high for the group. The team featured a starting five of three seniors and two juniors. Tanner Bergmann, Bryce Bultman, and Kelton Harre were the senior group accompanied by juniors Tristen Hercules and Carson Parker. Terry Pelczynski and Matt Anderson were also vital pieces off of the bench.

“They were pretty high, a lot of people on the outside were talking about us,” said Head Coach Wayne Harre, who at the time was in his second season at the helm. Terry Pelczynski, who was in his junior season, continued. “All summer long, all season long, we knew what we could do. We talked about going to State seven days a week. We had fun as a team, but when it was time to practice we put our hard hats on.”

The team began the season by rattling off eleven wins in a row before the Mater Dei Holiday Tournament. The Hornets collected victories over Metro East Lutheran, Mascoutah, Red Bay, and Mater Dei, and their undefeated record in pool play allowed them to play for the tournament championship. Although Nashville was able to win their first four games fairly easily, they were running into a loaded Briarcrest team. The Saints handed Nashville their first loss of the season in the form of a 47 to 28 blowout. Five days later, the Hornets traveled down to Pinckneyville to face their arch rival, the Panthers. In a low scoring game, the Hornets dropped their second in a row 31 to 29. For a team which won their first fifteen contests, all of a sudden the group was forced to look at themselves in the mirror in the midst of a two game skid.

“At the point it was like, this can’t happen, we knew we had to pick it up,” said Bryce Bultman, a senior and the team’s second leading scorer.

Fresh off of a Friday night loss at Dick Corn Court, the Hornets made the trip to the Highland Shootout to play Effingham. The group was able to shake off their previous woes and escaped with a hard fought 57 to 48 win. It was at that point Coach Harre knew his team was ready to make a run.

“When you go to Pinckneyville on a Friday night, and turn around and go to Highland the next day, that’s a lot of traveling. They battled the whole game, and after that they took off,” Coach Harre said.

The veteran coach could not have been more accurate, as the Hornets collected thirteen consecutive wins to close out their regular season. They were able to make quick work of their Regional opponents, as they beat Carlyle by thirty and Wesclin by fifteen to claim the Regional Championship. The Hornets were then tasked with Frankfort in the first round of the DuQuoin Sectional. A 54 to 31 win set the squad up with Alton Marquette with a trip to the Super Sectional on the line. The hope for a State birth remained alive following a fifteen point victory over Alton Marquette, and Nashville was heading to the Carbondale Super Sectional to face the Wooden Shoes of Teutopolis. Even though the Hornets were not in need of extra motivation, they received some bulletin board material days before their matchup. Earlier in the season, the Hornets beat “T-Town” by eighteen at the Rich Herrin Classic. Apparently, the convincing win was not enough to strike fear in the eyes of the Wooden Shoes. The victory was referred to as a “fluke,” and the Hornets did not take too kindly to it. Senior Kelton Harre recalled receiving a copy of the published article which was given to them which had the comments underlined.

“Coach (Kelly) Cruser is probably our quietest coach, and he showed us that article and said to let it sink in. I could have never imagined him doing something like that,” said Kelton. Peczynski continued, “our locker rooms were right next to each other and when we passed them we just started clapping and yelling, it was a great game. Bultman recollected on the moments before the game with a laugh, “that was mainly just Terry.” The Hornets racked up their second win of the season against the Wooden Shoes, and moved on to Peoria with a 41 to 28 victory. Tying in with the story, earlier in the season, T-Town played within seven points of East St. Louis, the eventual 3A Champs. The Flyers defeated Nashville’s eventual opponent, Chicago Orr, by three points in the first game of the regular season. In the two days leading up to the Hornets first game at the State Tournament, Coach Harre reflected on the hype surrounding the accomplishment.

“It’s tremendous. It goes by so fast,” Harre said. Bergmann continued, “When I was a freshman, I said if there’s one thing I want to do, that is it,” in regards to making it to state.

Nashville would have to go through Gibson City to keep their dream alive. The team struggled from the charity stripe, but they were able to do just enough to advance to the title game after a 47 to 45 triumph. The Hornets were riding high, but in order to come home with the State Championship they would have to knock off Orr Academy, who were back-to-back 2A Champions. The goal for the Hornets was to slow the pace of the game down to their level. The Hornets struggled from the field, specifically from behind the arc, as the team finished the game 0-11. The off shooting night of the Hornets enabled Orr to win their third consecutive title, 50 to 36.

“We were there, we just couldn’t buy a basket,”  Coach Harre said.

Even though the team fell short, they had the respect of their opponent. Coach Harre explained after the conclusion of the game, Orr’s Head Coach told him how impressed he was with how the Hornets defended his team.

“He told me how impressed he was, and that if some of our shots would have fallen it would have been a different game. I appreciated that. They were frustrated on the court” Harre said. Kelton Harre continued, “When the buzzer sounded we were disappointed, but coach told us we had nothing to hang our heads about.” Parker added to that, “making it to state was one of the best experiences of my life.”

While it was not the story book ending the team envisioned, 35 wins was enough to break the storied school record.

Juniors Parker, Hercules, and  Anderson spoke on what it meant to break the record.

“It was awesome to break the school record for wins. It was great to win that many games with the awesome team we had,” Anderson said. Parker echoed those comments, “breaking the record is something that I’ll always remember, and it took a whole team effort to do that.” “It was a really big season to me because it was my first year starting and going that far in my first year means a lot,” said Hercules.

The success of the team was in large part credited to not only their defense, but the relationship the group had on and off the court. Not only had the team been playing school ball together for many years, but several of them played on the same select basketball team  over the summer throughout the years.

“I thought we had a really good season because of our really good chemistry. We all have been playing together for a long time so that is a key part to be going far in the postseason,” said Hercules. Bultman continued, “Nobody ever got mad at anybody, we were all there for each other.”

The words “best friends, “family,” and “tight knit” were other words brought up regarding the unity of the group. The trust was also there amongst the coaching staff as well.

“There was a respect there, they trusted us to go make plays,” Bergmann said. Coach Harre was assisted by Kelly Cruser, Jason Guest, and Patrick Weathers.

All of the parties harped on the team’s ability to get stops defensively as well as the ability to spread the wealth offensively. The size of the team allowed them guard teams differently as well as limit their opponents second chance opportunities. Coach Harre specifically spoke on his team’s defensive performance throughout the postseason, as the Hornets only allowed their opponent to surpass thirty points once until they reached State, and it was only 31.

“Our defense was killer,” Bergmann said. “They took a lot of pride in getting stops. Orr scored 50, and that was still 20 below their normal average.” said Coach Harre.

Although the team came with size, Anderson explained how important it was the team had heart.

“Size does not matter at anything as long as you have the heart you can achieve the goal,”  Anderson said. “Now every time we go to Assembly Hall, we will see our banner and our picture in the hallway, it means a lot,” added Pelczynski. 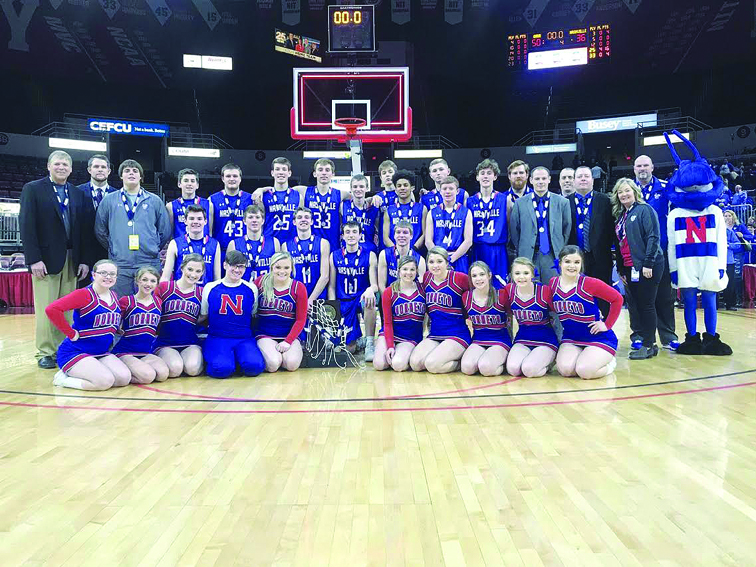