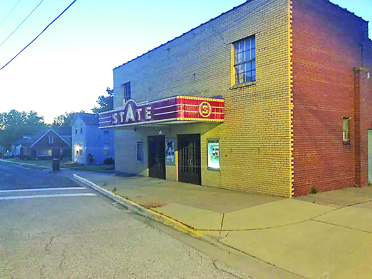 A longtime movie theater in Nashville will remain shuttered for the time being.

State Theater Board President Carole Moeller said the rules that have been in place to reopen after the coronavirus pandemic shut down several businesses, especially those in the entertainment industry.

“Due to various restrictions, at this time the State Theater does not plan to open,” Moeller said.

The State Theater, located at 153 West Elm Street, was built in the late 1940s. Before shutting down in mid-March because of the pandemic, the theater had offered once-a-day screenings of newly released films.

Moeller said there was two big factors that were taken into consideration in the decision to remain closed. The theater pays royalties on the movies shown on screen. If there is a limit of the number of people who can view the film, then at least half would be going toward the film company.

“Since we can only have 50 people, our take in would be $500 total,” Moeller said. “Half would go to the film company, which means we would only take in $250. We cannot monetarily do that.”

Many film companies have also decided to not release new movies for the considerable future because of the virus restrictions.

“We also don’t know if we will have any to show,” Moeller said.

Another major factor in the decision was the amount of cleanup and  manpower it would take to monitor  to ensure safe social distancing practices were being conducted. Moeller said some of the restrictions include taking temperatures and not sitting to close together, many of the same guidelines now employed by churches, which have begun services  earlier this month.

The idea that someone may contract the virus at the State Theater is not something that the theater officials would want to see happen.

“The kids are our priority and we want them to be safe,” she said. “We know parents are anxious to come bring your children to the theater and we are anxious to have them.”

Movie passes will be honored once the theater is allowed to safely reopen.

The annual Spring Rummage Sale for the State Theater was postponed and is still happening, Moeller said. The plan is to host the event in the fall.

“There will be two huge rummages sales with lots of wonderful stuff,” she said.

Moeller added that if anyone has items they would like to donate, they can hold on to them until storage becomes available.