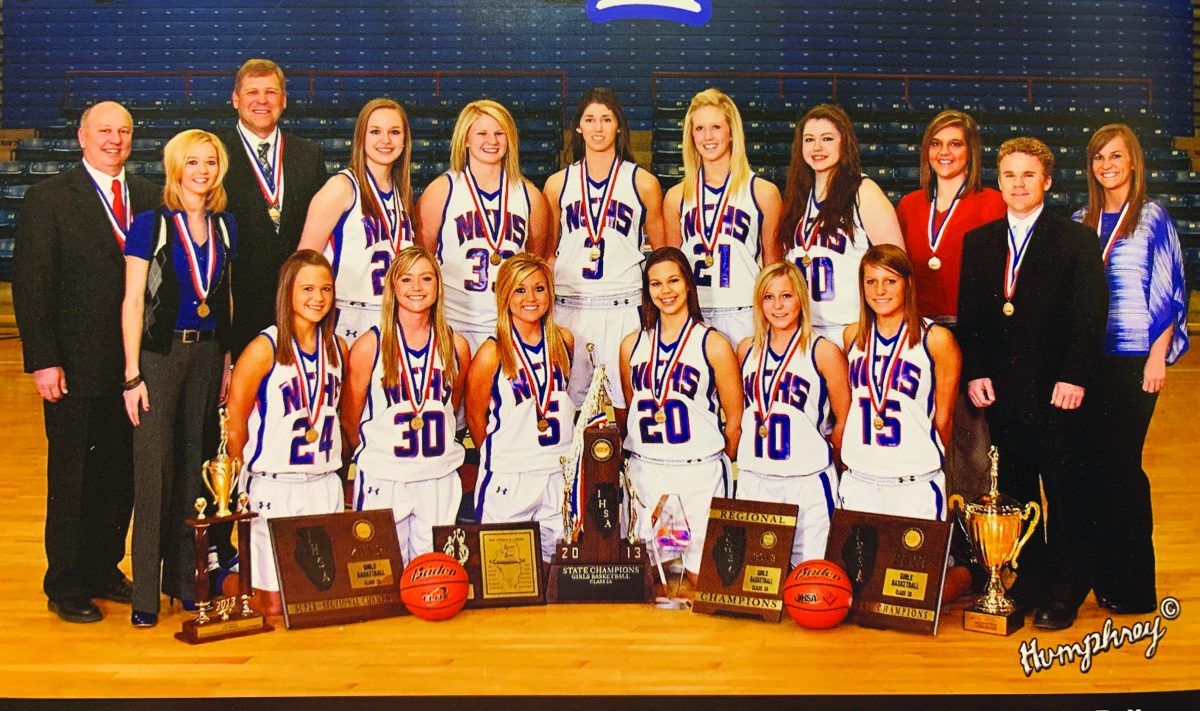 Last week, we took a look back on the first team to win State in the history of Nashville’s storied tradition. This week, we will continue the theme of “State Champions” as we remember the 2013 Hornette basketball team. With Wayne Harre under center, the team finished with an overall record of 33 wins and 2 losses while finishing a perfect 10-0 in Conference play.

“When you play for Coach Harre at Nashville, the goal is to always get to State,” said returning starter Shaye Harre. Erica Brown, a senior, continued, “we always had strong seasons and we had a lot of key players returning.”

Shaye was one of two senior starters along with Brown. Juniors Hannah Yung, Shawn Rennegarbe, and sophomore Jordi Harre rounded out the starting five while senior Emily Gill was the team’s “Sixth Man.”

Rewinding to the Spring of 2012, the team was fresh off a loss in the Sectional Championship against Breese Central.

“A lot of the girls had a bad taste in their mouths from the year before,” said Coach Harre. Rennegarbe echoed those comments, “we all took it pretty hard.” Harre continued, “I could tell from the beginning of the season they were focused on being as good as they can get.”

As good as they can get turned out to be pretty good to say the least, as the team was able to collect 25 consecutive wins to open up the season. It was not until December 28th when the Hornettes did not win a game by double figures. Accolades which were collected amongst  the winning streak included taking home first place in a loaded field at the Mascoutah Holiday Tournament. It was then both Rennegarbe and Jordi Harre knew the dream of returning to State could soon be a reality.

On January 16th, 2013 in the Highland Tournament the team suffered its first loss of the season to Belleville West, a team who they had previously beaten at Mascoutah. The group ended up placing third in the always competitive tournament. Nearly two weeks later, the team received an invitation to play in the Coaches vs. Cancer Shootout at Scottrade Center in St. Louis. They were matched up against the undefeated and eventual 3A State Champs, Quincy Notre Dame.

“That was a tremendous game, their coach told me that was as close as anybody had played them” Coach Harre said.

In a tightly contested battle, the Hornettes fell just short in the form of a 41 to 36 loss.

“I remember late in the game one of our shots rolled off the rim, and that was pretty much it,” Coach Harre said. “We were playing right there with them, that’s how good we were at the time. It helped us down the road.”

Even though they were sent home with a loss, if there was such a thing as a good loss, this one would have fallen into that category.

“At the time, it was the best thing for us,” said Shaye, who also joked about her feet being cold throughout the game as the arena is primarily used for ice hockey. Agreeing, Gill said “it was more beneficial to us than anything.” “That game helped us out a lot because it’s similar to the State Arena,” Brown said.

Although this game could be classified as a good loss, the team was still heading into the postseason on a losing note.

“You never want to head into the postseason with a loss,” Coach Harre said. Rennegarbe continued, “We knew we had to get back to the grindstone. At that point in the year it’s really easy to hit cruise.”

Needless to say, the team was able to regroup and find themselves in the Regionals. In the Ziegler-Royalton Regional, the group posted wins over DuQuoin and Sesser by a combined point differential of 52.

“We were able to get through the Regionals pretty easily,” Coach Harre said.

The group was riding high on the emotions of a Regional Championship, but the focus remained intact. The group would have to get past the team who eliminated them the prior season, the Breese-Central Cougars. They were able to move forward following a 45 to 33 victory. After the win over the Cougars, the team took care of business against Red Bud to advance to the Super Sectional. Teutopolis was the only team standing in the way of the Hornets and a trip to Bloomington.

“That game, it was pretty tight for a while, we didn’t shoot it well, it was a grind out game for us,” Coach Harre explained.

The group prevailed with a 43 to 36 win and were Bloomington bound for the third time in the last four seasons. Brown points to this game when she felt the reality of going to State.

“Overcoming that game gave us a deeper motivation,” said Brown.

Rennegarbe explained the challenge of playing in the postseason to that point.

“Teams just tried to physically overwhelm us, try to make us angry, it was not easy, but we always found a way,” said Rennegarbe.

The squad’s first opponent at State was Melrose Park (Walther Lutheran).  Both Gill and Shaye Harre believe this is when reality set in for them.

“Not until we stepped on the court for that first game,” said Gill. “I’m a one game at a time kind of person, I never looked too far ahead,” said Shaye.

Although the team came out with a 50 to 29 victory, Shaye Harre explained the challenge.

“They put us to the test. That was probably the fastest game we’ve ever played.” said Shaye.

Prior to the State Championship game, St. Thomas More’s Head Coach made a public statement announcing his confidence in his team, seemingly writing off the Hornettes.

“I just remember we were all watching it on TV and he said something about how he had five division one players so they’d be okay,” Rennegarbe said. Coach Harre recollected on being the underdogs, and how nobody in Bloomington gave his team a chance to win the game.

After a close first half, it was Yung who provided the spark for the team in the second half. The junior connected on three consecutive three pointers, giving the Hornettes a double digit lead before More was forced to call a timeout.

“It was almost four but the fourth one rimmed out,” Coach Harre said.

The team was able to hold on, and the State Championship Crown made its first trip to Nashville. Jordi Harre recalls the final seconds of the game.

“In the final minute it’s like okay, we’re going to win this. It was great,” Jordi said. Gill continued, “It feels great, it was a really good accomplishment.” Coach Harre explained this game as being “one of the best wins I’ve been around, for girls or boys.”

So, what’s the cause for the success?

“I didn’t really have to do a whole lot, they were really focused. They were all coaches on the floor. They were smart people. They were just a group that knew how to do things,” said Coach Harre.  There are several sources the group pointed to, comradery being a major one.

“We meshed well, we did a great job of playing off each other. We always knew what the other person was going to do,” said Jordi.

Another pinnacle to success was the juggernaut of an offense and defense.

“We had a good defense, but our offense was killer,” said Gill. Coach Harre carried on with that statement, “We always felt we could get up and guard, defensively, there was nowhere to go. Nobody could get to the basket against us. We rarely gave up easy baskets, it just didn’t happen.” Shaye described the offense as being able to “play big, play small, play slow, and play quick.”

The balance was also there, as the group explained the ability of different people to step up in different circumstances if needed. The locker room was also described as  “drama-free,” with no greed.

“Thank God,” Brown said with a laugh. “We were jokesters, there were times when we would hide in the lockers and jump out and scare the coaches, but we knew when to get serious too,” said Jordi Harre. “Everyone got along so well,” explained Rennegarbe.

The team also credited their bench for their success.

“Nobody ever complained about playing time or anything like that, everybody did their job well,” said Rennegarbe.

Kiley Pelker, who was a junior, explained everybody always made them feel appreciated and how Coach Harre “always made everybody feel like part of the team.”

“They had to guard us, the State Champs, everyday in practice, they worked their tails off for us. They were always involved, cheering and yelling. We appreciated what they did for us.” Coach Harre said.

The selflessness was on display from the beginning of the season. Gill, who had taken a couple years off from the game, went in depth on her experience.

“When I came back, I thought there may be some people mad about me getting playing time. I never felt any of that. We joked about it sometimes, but it was all fun,” explained Gill.

As mentioned before, this is the only time the Hornette basketball program has won first at State.

“We hung a lot of banners, but there were no white ones. We were tired of going up there and coming home without it,” said Rennegarbe. “We came out with a State Title, to this day it’s hard to believe it actually happened,” said Brown.

“They were all part of it,” said Coach Harre.