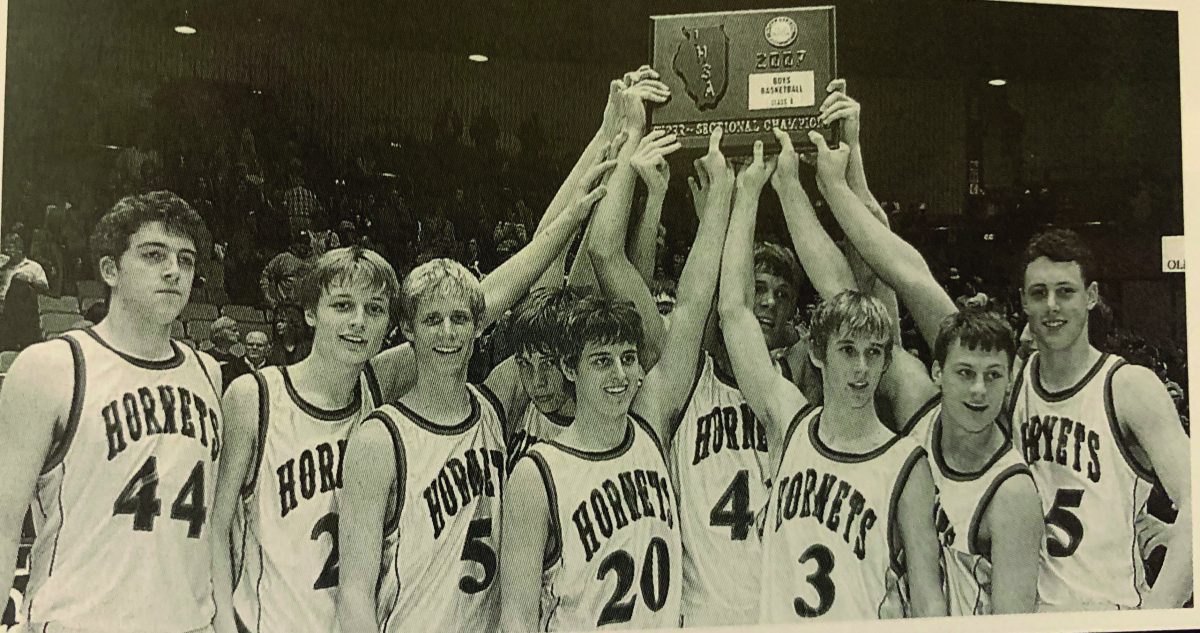 What were you doing between the months of November and March in 2007? For me, I was struggling to pass 5th grade Math at Okawville Grade School. A short ten miles down the road, the Hornet basketball team was not only passing, but they were defending and scoring as well, and there was a lot of it going on. Coming off of a loss in the Sectional Championship against Pinckneyville the prior season, the Hornets were well equipped for another successful season. To the outside world, the expectations did not seem to be too high, as the Hornets did not receive a good ranking in the opening polls. The team remained cautiously optimistic.

“I think it’s because we struggled during the summer,” said Coach Lee. Senior Ryan Keller added, “they were high, but they were tempered because we had just lost in the Sectional Championship a year ago.”

Coached by Lee, the starting five consisted of four seniors in Lucas O’Rear, Ryan Keller, Matt Engele, and Patrick Weathers. Junior Tommy Pelczynski rounded out the starters. The theme of upperclassmen continued, as Blaine Morris, Brandon Reckmann, and Dylan York were the primary players off the bench, all of them seniors. One thing is for sure, the depth was there.

“We were really deep,” said Weathers. “We had a lot of firepower that year,” remembered Pelczynski. “There were eight or nine guys on that team that could have started for any team in the state,” added Reckmann.

Coach Lee, who is currently Head Coach for the Collinsville Kahoks, also reflected on his group with the highest of praise. “This was the deepest group I’ve ever coached at any level.”

The team began the season by winning in the Lebanon Thanksgiving Tournament, and were undefeated going into the Mater Dei Holiday Tournament. After collecting victories against Jerseyvillle, Mater Dei, Okawville, and Effingham St. Anthony in their first four contests of the tournament, the team was tasked with North Lawndale-Chicago in the Championship game. It was the tightest contest thus far for the Hornets, but the group prevailed with a nine point victory. It was the biggest victory of the season for the Hornets.

“We made some noise,” recalled Weathers.

A couple weeks later, Nashville would have to travel to Pinckneyville for their first matchup of the season against their arch rival. There were postseason implications on the line.

“That season, it was either us or Pinckneyville who were going to go to State,” said Lee.

The team was able to travel back up 127 with a hard fought, seven point victory.

“That was kind of our coming out party,” said Weathers.

The undefeated season continued into the postseason. Although the group had not lost, there was not much in the form of looking ahead.

“I think there was one time after we beat Pinckneyville, we were looking at the rest of our schedule and thought maybe we could go undefeated, but that was it,” said Pelczynski. O’Rear continued, “If we did talk about it, it was short lived.”

The team steam rolled through the Regional and first game of the Sectional before coming across a familiar foe: Pinckneyville.

The Hornets were able to do just that in the form of a nine point victory.

“That’s when we really thought we had a good chance, they had our number in the past years,” recalled Reckmann.

The Hornets were next tasked with Mt. Carmel, a team they knew little about. Nashville was able to turn the playoff game into a laugher, and were headed to Peoria proceeding their thirty point win. In 2007, it was still a two class system, so it was a “win or go home,” game for the Hornets on Friday against Teutopolis. The journey came to an unexpected end after a 43 to 38 loss.

“It was abrupt. We drove up there lost and came home,” Weathers recalled. Pelczynski continued, “ I just think the ball didn’t go our way that day. We all kinda thought, is this really over?” Keller and Breckmann both described the shooting as “we couldn’t throw it in the ocean.”

Earlier in the season, the team played the Wooden Shoes in the Riverton Shootout, by accident. The Hornets were originally scheduled to play Riverton, but due to a last minute injury the blue and red played T-Town. Although the group came away with a double digit victory, one could wonder if perhaps things would have been different for the Hornets if the Wooden Shoes would not have been given a first look.

“I don’t know. It goes both ways because we got a look at them too. At that point in the season, if you’re playing at State, it shouldn’t matter anyways. That’s basketball.” said O’Rear.

Although the dream season ended sooner than expected, there is still a lot to look back on and a lot of credit to be dished out. Fans who were exposed to this team witnessed a rare combination of size, shooting ability, defense, depth, and competitiveness.

“Nobody wanted to go out, when we would sub in those other guys would do great, and it was kind of a back and forth thing. Everybody was so competitive,” said O’Rear.

Each player brought something different to the table.

“Patrick was a great cerebral player and a good post pass entry player. Engele was our ball handler. Pelczynski was a good wing scorer. Ryan was our top defender and had good size. Blaine was very athletic and versatile, Reckmann was a great shooter, and Dillon York could score off the bench. Lucas was absolutely dominant.” said Lee. Keller continued, “we almost got better offensively when the guys off of the bench came in.”

Reckmann, who came off the bench, described the competitive atmosphere.

“You hated seeing someone sprint towards the scorers table. The way I saw it was if I played as hard as I could, things would work itself out,” said Reckmann. He added while there was competition for playing time, the team’s sole focus was on winning the game itself. He credits the group’s relationship off of the court for their success on it. He noted they had not only played basketball together for many years, but several other sports as well.

“When one guy was scoring more points, it’s not like there was any amnesty amongst us, we were mainly happy because we cared about the next guy. Very rarely did you see us not together. The unselfishness was off the charts. Nobody cared who was scoring the points, we just wanted to win,” said Reckmann.

The group also described what it was like to play alongside “a Division 1 man child,” in O’Rear, who finished his career with 2,116 points, 1,090 rebounds, and a career field goal percentage of 76.5%, all being school records. His tally of 401 made free throws over a four year span is also a Nashville record. Throughout a three game period against Teutopolis, Pinckneyville, and Chester, he knocked down a record setting 21 consecutive field goals.

“It was pretty simple. We ran 4 out 1 in around him. If he was double teamed he would kick it out to one of us,” said Weathers. “He made our lives easy because he drew so much attention. Guys would leave us wide open. He was underrated as a passer, he was awesome at finding the open man,” Keller said.

As for what it was like to play for Coach Lee, the praise was equally as high from his players. He was described as a coach who has a very high IQ and someone who is very direct, straight forward, and hard-nosed.

“I remember before games he would tell us stuff like if we make seven threes we will win the game. If we stay under twelve turnovers we will win the game,” Weathers said. “Looking back on it now, I’m glad he was my basketball coach. He did a great job of keeping us on the rails” said Keller. Throughout his eighteen year tenure at Nashville, he compiled a record of 426-128 to go along with five Elite Eight appearances.

The group held the school’s win record with 33 for over ten seasons before the 2019 team broke it. They are tied for second with the 1949 team. The group also never trailed at halftime until the State Quarterfinal game while averaging a win margin of over twenty points per game. The squad also finished the season with 185 made three pointers, which is good for second all time in school history. They are just one short of the record, 186, which was set by the 1998 Hornets.

“They were just a special group of young men. They are so successful in their endeavors today, and that’s really all that matters. They were a fantastic team.” Lee said.