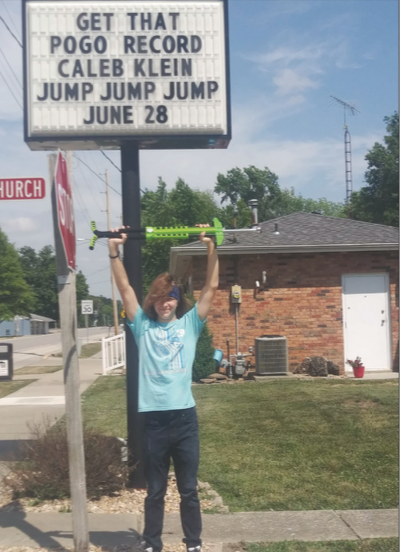 It is Christmas time nearly a decade ago, and eight year old Caleb Klein is unsure of what he wants to see under his tree.

“I wasn’t sure what I wanted that year,” recalled Klein.

Little did he know, the pogo stick he received that morning may have start- ed him down the path to forever be enshrined into the history books. Specifically, the Guinness Book of World Records. On Sunday, June 28th, Klein rattled off 13,015 consecutive jumps on his pogo stick. To make matters even more impressive, he completed the task with no hands, which is part of the record. Through the years, he has used his pogo stick “off and on,” but his interest in the Guinness World Record Book is what got the ball rolling for him.

“I’ve always loved Guinness, and I always tried looking for records I could break, and when I saw the pogo stick one, I thought I could do it,” Klein said.

The record he was trying to break was 6,100, which was set by Lachlan McIntyre of Sydney, Australia on November 10, 2019. Al- though this was performed June 28th, it has been in the works for nearly three months.

“You have to apply three months in advance,” Klein explained.

As expected, Klein trained in advance of his accomplishment a couple different times. The first time he was able to keep going for thirty minutes. The second time he made it an hour and a half. On the afternoon of June 28th, Klein executed the task in front of Nashville Community High School. In order to qualify for the record, there are several boxes needed to be checked. Besides applying three months in advance, Klein needed two individual witnesses, video evidence as well as pictures. His two witnesses were Tom Taylor, his track coach, and Casey Giacomo, a science teacher at the school. Klein admit- ted the nerves were there at first, but they quickly wore off once he got going.

“At first I was really tense, but it got a lot easier,” said Klein.

Now, dealing with fatigue as well as the weather, Klein still continued forward. Nearly two and half hours after the start time, Klein reached 13,000 before eventually stopping at 13,010, more than doubling the old record.

From the time he started until the time he finished, a total of two hours and twenty minutes had passed by.

“When I was done I couldn’t bend my legs.” said Klein.

What now? Though he had witnesses, pictures, and video evidence, it could take up to three months to officially hear back from Guinness regarding the status of his record.

With that being said, if the record were to get broken by someone else, he would be up to the challenge of doing it again in order to retain his accolade.

“If I trained more I could do more,” said Klein.

He also noted down the road he would be open to attempting to beat the world record for the fastest mile on a pogo stick.

Others who attended and helped with the event were his mother, Mary Klein, his step-father, Gayland Pearson, his brother, Ryan Klein, and his sister, Sum- mer Klein. Also there in support were his two dearest friends, Natasha Morgan and Timogan and Timothy Joseph as well as fellow Kroger co-workers Bobby and Brett. Klein will begin his senior year this fall at Nashville, and he participates in cross country as well as track and field.