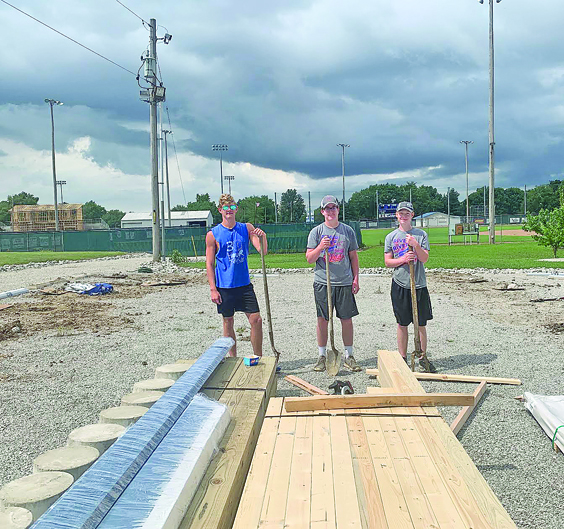 A new structure on the Nashville Community High School campus will allow the music department to continue to safely perform together outside during this school year.

The new pavilion is completely funded through the NCHS Music Boosters and it is now being constructed east of the band practice field. The structure will provide a safer environment for students to play together throughout the year.

NCHS Music Director Steve Browne said he and Michele Goostree were brainstorming ideas to continue to conduct band practices during the semester. After talking with Superintendent Brad Turner and groundskeeper Barry Morris, it was decided that a multi-purpose structure way for band practices and functions.

“It’s been recommended that music happen outside rather than inside because it is safer,” Browne said. “The air circulation rate outside is obviously greater than inside, so it will reduce the risk of students becoming sick while they are rehearsing.”

The construction is being conducted by Browne and a few members of the music honor society Tri-M. Those members include Trent Browne, Austin Kozuszek, Dave Arnold, Ethan Gambill and Garrett Williamson.

Steve Browne suspected that the total project should be completed within three weeks. Poles have been dug and more work is expected over the next few days.

“Once we get the roof on, it should be done pretty quick,” Browne said.

Once the pavilion is completed, the music department can use the pavilion for small performances and concerts during the school year.

Browne added that the department is grateful for all of those who helped make the pavilion project possible.

“The Music Boosters are very generous with their fundraising efforts,” he said. “We want to also thank the administration and the board for allowing us to build.”

This week also marked band week, which looked a bit different than in the past. Because of the IHSA decision last week to postpone the football season until the spring, the Marching Hornets will also delay the fall marching performance season. Browne said the students socially distanced, bell covers were used on the horns as well as other precautions were also observed during that time.

“The largest group I have is 49, and they are all socially distanced and six feet apart,” he said.