The Illinois Department of Public Health said Friday, August 14, that the Region 4 (Metro East) of the 11 COVID-19 Regions, which includes Washington Count, may surpass state resurgence metrics “in the coming days.”

“Region 4 is seeing increases in test positivity rates and could surpass the resurgence metrics in the coming days,” the department said in health release. “If the region experiences three consecutive days of 8 percent test positivity (7-day rolling average), the State will implement mitigation measures.”

A list of mitigation options can be found on the coronavirus.illinois.gov website. Other counties considered in the Region 4 are St. Clair, Clinton, Randolph, Madison, Monroe and Bond counties.

According to the state, Clinton County was listed as one of 14 counties that moved into the orange distinction this week. Counties that are meeting targets developed by COVID-19 mitigation experts are considered blue while those that are not are considered orange. A designation of orange is meant to prompt individuals, businesses and schools to revisit their current practices, plans and behaviors as this designation indicates the risk of transmission of COVID-19 is higher than in other areas of the state and higher than it has been in our area previously. 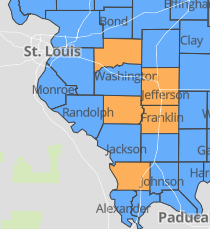 IDPH County Metrics as of Aug. 14

Washington County reached 70 total positive cases this week, including its first COVID-19-related death, according to state and local officials. According to the IDPH, there were nine new cases reported from Aug. 2 to Aug. 8, with a test positivity rate of 8.3 percent. There were 133 tests performed during that time period.

Following guidance from the Centers for Disease Control and Prevention, IDPH is now reporting both confirmed and probable cases and deaths on its website.  Reporting probable cases will help show the potential burden of COVID-19 illness and efficacy of population-based non-pharmaceutical interventions.  IDPH will update these data once a week.

*All data are provisional and will change. In order to rapidly report COVID-19 information to the public, data are being reported in real-time. Information is constantly being entered into an electronic system and the number of cases and deaths can change as additional information is gathered.  For health questions about COVID-19, call the hotline at 1-800-889-3931 or email dph.sick@illinois.gov.