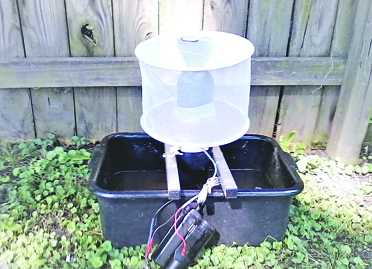 The Washington County Health Department confirmed a positive testing for the West Nile virus, the first such case in Southern Illinois.

“In these days of growing concerns over COVID-19 virus, the county health department has not overlooked the annual threat occurring every year from mosquito-borne diseases,” said Will Summers, Environmental Health Director. “West Nile Virus (WNV) is spread to humans from certain bird species by mosquitos.  Summer to early fall is the most prevalent breeding time for most mosquitos in southern Illinois.  This summer has provided abundant rain and increased temperatures that are favorable mosquito breeding conditions.”

Summers said before the positive case in Washington County, the only confirmed risk to West Nile Virus existed in ten northern Illinois counties.

“Regrettably, the Washington County Health Department has found our first WNV-carrying mosquitos in Nashville this past week,” he said. “This find represents the southern most incidence of WNV in Illinois for the year.  To date, no human cases have occurred anywhere in Illinois.  Mosquitos also infect horses with equine encephalitis.”

The health department will continue to sample mosquito populations throughout Washington County Each week until mid-October.  These reports are forwarded to IDPH in Springfield for statewide analysis.  Once a county has found a positive WNV bearing population, either a bird, mosquito, human, horse or other mammal, the county will remain positive for the rest of the season.

This positive test is the first in the county in three years. Summers said there were no previous positive finds since we began testing the previous 12 years.