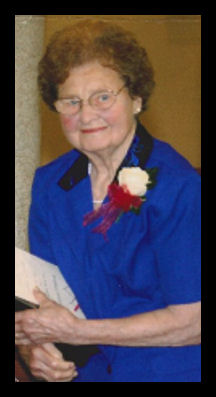 Mrs. Florence M. (Winkelman) Chwasczinski of Ashley, IL, departed this life at her residence in Ashley on Sunday, April 12, 2020 at 11:15 PM.  She had attained the age of 92 years, one month and four days.

Mrs. Chwasczinski was born on March 8, 1928 in St. Louis, MO the daughter of Harry and Marie (Bahlinger) Winkelman.  She was united in marriage to Walter J. Chwasczinski on September 16, 1950 at Holy Cross Catholic Church, St. Louis, MO and he preceded her in death on December 24, 1993.

Florence worked at Stix Baer and Fuller in her early years until she met, fell in love and married a dairy farmer.  She truly loved the family farm and enjoyed her life as “A Farmer’s Wife” where she spent the past seventy years as an intricate part of the daily farm operations.

She was preceded in death by her parents, husband, sister, Dorothy O’Mara; sisters and brothers-in-law, Stanley and Mabel Chwasczinski, Joseph and Josephine Bonk, Andrew and Jannivie Czajkowski, Walter Rybacki and a nephew, Steven Rybacki.

Memorial Mass will be held at St. Michael Catholic Church in Radom, IL on Saturday, September 12, 2020 at 11 AM with Fr. Oliver Nwachukwu officiating.  Those wishing to attend are asked to go directly to the church.