For the second straight council meeting, the Nashville City Council gave the green light for year-end holiday celebrations, approving the donation proceeds for a tree and the street closures for the third annual Nashville Hometown Christmas.

The council also said it would take under advisement a request from the Washington County Vocational Workshop about a needed addition for its CILA home.

The Nashville City Council meeting on Thursday, October 1, began with discussions from the Hometown Christmas representatives. Courtney Gladson said the preliminary plans for the downtown festival would be to put in extra safety and cleaning precautions in hopes of proceeding with the festival as originally planned.

Gladson said there are plans to approach the Washington County Board in hopes of using the courthouse lawn for some of the celebrations. Other plans include a skating rink, vendor fair, take-and-create craft bag stations for children to complete at home and several other events.

The Nashville Hometown Christmas is planned for Saturday, December 5.

“In the Hallmark movies, it always works out,” Gladson joked before adding: “We picked that weekend because it’s not in the hustle of Thanksgiving. Our goal is for people to maybe get it on their calendar so that is is always the weekend after. It’s something that you know is coming.”

Councilman Doug Hargan said he was for allowing the festival to continue this year.

“We had the fireworks,” he said. “I think they respect standing apart.”

The council approved the street closures on December 5 as well as a $1,050 to cover the cost of the Christmas tree for the lighting ceremony.

Washington County Vocational Workshop Executive Director Cynthia Cookson approached the board during the public comments portion of the meeting to discuss the financial struggles that the workshop has had to endure during this year.

Cookson said the workshop has seen a diminished number of clients since the beginning of the pandemic.  She said there have been several state cuts in funding over the years that have proven increasingly more difficult to manage. The coronavirus pandemic has also caused some of its workers to not return, even with safety precautions in place.

The biggest financial hurdle and most immediate need is the addition onto the CILA home on Maple Street. Cookson said many of the residents have lived there for 30 years, but as they are getting older, the building is in need of renovations to accommodate their needs.

But other obstacles are in the way. When the workshop board attempted to put in a chair lift, state officials forced its removals because it did not meet their criteria.

“We are batting zero,” Cookson said.

The workshop is strapped on available cash, Cookson said, as all available funds were used to renovate the WCVW building so that it could be reopened after months of being closed.

“It took so much money to get the workshop up to code or we would be closed for good,” she said. “We ran out of money.”

“We just don’t want our people to have to leave,” Cookson said. “This is their home. Nashville has been their home.”

Cookson read a study that stated the funding the workshop and comparable entities receive results in more funds that are put back into the community. She added that she is not expecting the city to completely fund the project but is hoping that a donation may encourage others to give.

“We are hoping if the city of Nashville could give us money, then other businesses might build on that,” she said.

Mayor Raymond Kolweier said he would like to take the request under advisement and meet with Cookson in the future.

Police Chief Brian Fletcher said the cell phones that the city had purchased at a prior meeting have arrived.

The city began collecting seasonal leaf bags on Friday, October 2. The collection will be on Monday and Friday mornings, and only yard disposable bags will be collected. Non acceptable bags will be left on the curb.

A concrete repair work project was approved for in front of the Nashville Fire Department. The project is a 40-60 split with the fire protection district board. The city’s 40 percent came to $2,871.

The next city council meeting will be held on Thursday, October 15. 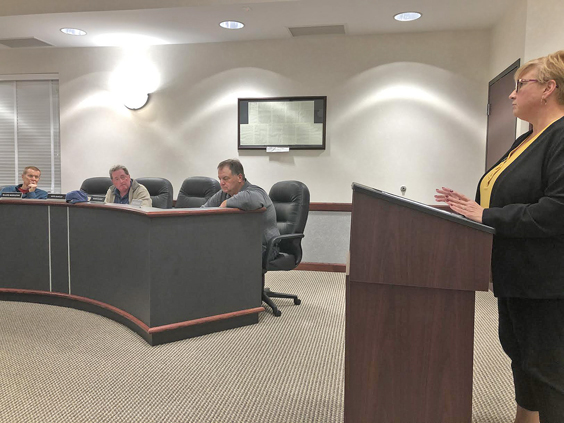