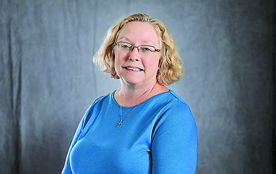 Cathy Karrick retired from her dream job, leaving the place she had been employed for almost four decades.

“Kaskaskia College is the only place I have ever worked,” Karrick said. “And I’ve really enjoyed all of it.”

The Director of Public Information and 1979 graduate of Nashville Community High School has worked for the college for 38 years. She said she started in 1983 as the Nashville Extension Center back when it was located at the high school.

In 1984, she became the community education assistant, a position that she held for a year until she was named Director of Public Information.

Karrick, who went to KC for two years before graduating with her bachelor’s from McKendree in 1983, said she ended up doing what she always wanted to do.

“They didn’t have public relations degrees back then, so I got my degree in English,” she said. “But I’ve always wanted to work in public information for a college, so in a way, you can say I got my dream job.”

In 2003, Karrick was instrumental in helping develop and establish the Kaskaskia College Sports Association. She said the association has been able to raise $1.5 million for the college athletics program since its inception. She was also the college’s volleyball coach on several occasions and was an extension service coordinator for a number of years.

When she looked back on her career, Karrick mentions starting the KICK program for children to participate in programming at the college, coaching volleyball and being inducted as a coach and her team into the Kaskaskia Athletics Hall of Fame and earning employee of the year in 2014.

One of the biggest differences she has seen during her 38 years is watching the college grow to some of its largest numbers on campus under the direction of former President Dr. James Underwood.

“I’ve seen a lot of changes, but the biggest and most important has been the enrollment,” she said. “We are a little down right now because of COVID but the numbers turned out better than we had anticipated.”

When asked what she will miss most about working at KC, her answer was quick and simple.

“The students,” Karrick said. “I’ve had some really strong connections with some of the students. I am really going to miss seeing them everyday.”

Karrick said she does not have much planned out now with her retirement but she is hoping to take “one hell of a vacation” possibly sometime in November.

“I think the administration at the college is now is the best it has ever been,” she said. “President George Evans is a great leader, and the school is going to continue to do great things.”