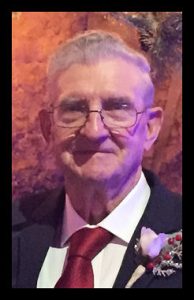 Mr Lamczyk was born on October 30, 1933 in Washington County, IL, the son of Leo and Sophie (Nowak) Lamczyk.  He was united in marriage to Dorothy Kasban on September 20, 1962 at St. Michael Catholic Church in Radom, IL and she survives his passing.

Andrew proudly served with the United States Army from 1954 to 1958.   He was a lifelong dairy and grain farmer and a member of St. Ann Catholic Church in Nashville, IL.  He was also a member of the Washington County Farm Bureau and a former trustee of the DuBois Township.  Andrew loved polka music, playing pinochle and restoring old tractors.

He was preceded in death by his parents, two brothers, Barney and Sylvester (Delores) Lamczyk and two sisters, Louise (Alex) Liszewski and Bernadine (Bill) Martin.

Due to Covid-19 restrictions, a private Mass of Christian Burial will be held at St. Ann Catholic Church in Nashville, IL with Fr. Andy Knopik officiating.  Interment will follow in the old St. Ann Cemetery.

Should friends desire, mass offerings or memorials can be made to the St. Ann Catholic Church and will be accepted by the Campagna Funeral Home, who is assisting the family with arrangements.