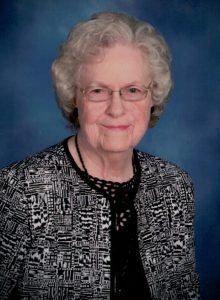 She was baptized November 20, 1927 and confirmed on April 6, 1941 at Olive Branch Lutheran Church in rural Okawville.  She was a member of the Trinity Lutheran Church in Nashville where she sang in the choir and was a member of LWML.  Lucille was a homemaker and  enjoyed quilting, word search puzzles, playing the harmonica, organ and accordion and especially enjoyed spending time with her family.

Friends may call from 9:00 to 11:00 a.m. on Friday, December 18, 2020 at Styninger Funeral Home in Nashville.  A private funeral service will follow with Rev. James Miller officiating.  Burial will be in the Trinity Lutheran Cemetery in Nashville.  Memorial contributions may be made to Trinity Lutheran Church.  Online expressions of sympathy may be made at www.styningerfuneralhomes.com or on the funeral home’s Facebook page.