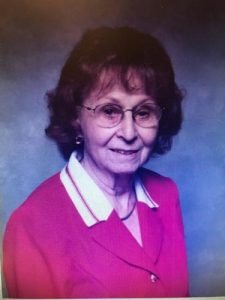 Merle Marie Beckmeyer, 93, of Hoyleton, passed away Saturday, December 5, 2020 at Cedarhurst of Centralia.

Merle was born October 1, 1927 in Centralia, daughter of Everett Byars and Harriet (Garrison) Byars. She married Roland Beckmeyer on February 22, 1947 at the First Baptist Church in Centralia and he preceded her in death on February 15, 2019 after 71 years of marriage.

She was preceded in death by her parents, a sister: Ruth Edna Walker; a nephew: Gary Vanbuskirk; a sister-in-law: Minnette Fortmeyer, and a brother-in-law: Louis Fortmeyer.

Merle was a member of the Zion Evangelical United Church of Christ in Hoyleton, where she served on the Women’s Guild. Merle enjoyed square dancing with her husband Roland, in their younger years. Merle worked for Midwest Dairy, Gross Style Shop, and JCPenny throughout her life. Her greatest enjoyment was spending time with her family.

Private Family Graveside Services for Merle Beckmeyer will be held at a later date with burial in Zion Evangelical United Church of Christ Cemetery in Hoyleton. In lieu of flowers, memorial donations may be made to the Zion Evangelical United Church of Christ and will be accepted at the Sutherland-Garnier Funeral Home at 235 North Sycamore Street Centralia, Illinois 62801, (618)532-3523, who is honored to be of service to the Beckmeyer Family. Online condolences may be made to the family by visiting www.sutherlandfuneralhome.com or the Funeral Home’s Facebook page.