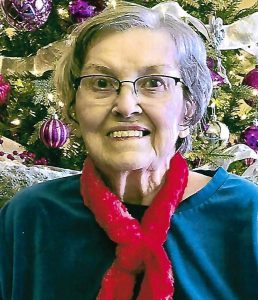 Marjorie served in the Women’s Army Corps (WAC) during the late 1940s and early 1950s. Marjorie’s first husband, Raymond Corl, was killed in action during the Korean Conflict. After her Army service, Marjorie returned to Richmond, Indiana, where she met her husband, Darrel, while working at Decca Records.

Marjorie worked for many years as an administrative assistant at Kaskaskia College. One of her proudest achievements was obtaining a Bachelor’s Degree later in life from St. Mary-of-the-Woods College. She was a member of St. Paul’s United Church of Christ in Nashville, Illinois.

Marjorie loved to cook, knit, read, and she was a fan of everything related to the book “Pride and Prejudice.” Marjorie loved animals and over the years she spoiled many dogs and one surly long-lived cat.

Marjorie was preceded in death by her husband, Darrel, a sister, Marilyn Morgan, and both parents.

Per the wishes of the family, cremation was performed and a Celebration of Life and inurnment will be held later in 2021.

Memorial contributions may be made to the USO through uso.org website or to Nashville Public Library (219 East Elm Street, Nashville, Illinois 62263.)