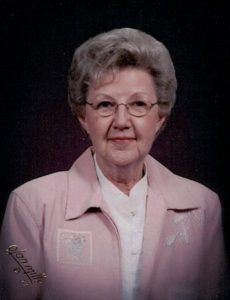 Marjorie L. “Margie” May, 87 of Nashville, passed away at 3:54 a.m. on Sunday, January 17, 2021 at Mercy Hospital in St. Louis.  She was born on April 19, 1933 on the family farm in Oakdale, the daughter of Harry W. and Lavon McClay Schaeffer.  Margie lived on the farm until she graduated from Nashville High School in May, 1951.  She married Walter C. May on August 14, 1954 in Nashville and he passed away on August 9, 2011.  After her marriage, she worked in the office at the Washington County Farm Bureau until 1959.  After the birth of her children, Margie was a stay at home mother until they started school.  She then worked at Schnare Studio 3 days a week.  In 1972, she began working at Nashville High School as a secretary until her retirement in 1991. After retiring, Margie and Walter were fortunate to do a lot of traveling.  They were blessed with grandchildren and spent as much time with them as possible.  Besides her husband, she was preceded in death by her parents, 4 brothers; Wilbur, Marvin, Darrel and Charles Schaeffer and 2 sisters; Eileen Rossi and Mary Barton.  Left to mourn her passing is her son; Phillip May and fiance’ Deb Gibbs of Nashville.  A daughter; Vicky (Andy) Sottile of Kirkwood,MO. 3 grandchildren; Alex Sottile of Houston, TX, Austin and Addison Sottile both of Kirkwood, MO.  A brother; Don (Pat) Schaeffer of DeSoto, MO.

Margie was a long time member of Grace United Methodist Church in Nashville and then joined the St. Paul United Church of Christ in Nashville where she was active in the Dorcas Circle.  She was a member of the American Legion Auxiliary and Washington County Hospital Auxiliary.  She enjoyed quilting, playing bingo and spending time with friends and her church family.  She was an avid St. Louis Cardinal fan and enjoyed attending spring training games.

Funeral services will be held at 11:00 a.m. on Saturday, January 23, 2021 at St. Paul United Church of Christ in Nashville with Rev. Beverly Kahle officiating. Burial will follow in the St. Paul UCC Cemetery in Nashville.  Friends may call one hour prior to services at the church.  Memorial contributions may be made to St. Paul UCC or Washington County Hospital Auxiliary.  Styninger Funeral Home in Nashville is in charge of arrangements. Online expressions of sympathy may be made at www.styningerfuneralhomes.com or on the funeral home’s Facebook page.

The funeral service will be live streamed on the funeral homes Facebook page.