The Nashville girls basketball team started their week with a 35-32 win over DuQuoin on Monday night. The Hornettes jumped out to an 11-0 lead in the opening minutes. A big rally by the Lady Indians that included a 10-point run put them on top by four at halftime. Their lead was two points after three quarters, but Nashville outscored them 7-2 in the fourth period for the win.

Alyssa Cole had a great day on offense with 23 points while Halle Rueter and Taleni Kozuszeck put in four each, Daphne Kollbaum had 2 and Jordan Donato and Emily Schnitker added one apiece.

On Thursday Nashville lost their first game of the season to Anna-Jonesboro by a score of 37-32. The Hornettes led by as much as five points early in the second quarter before settling for a one-point lead at halftime.  The Lady Wildcats took control of the contest in the third period when they outscored Nashville 9-4.

Saturday morning Nashville hosted Highland. The Hornettes were originally scheduled to play Benton Saturday afternoon, but they dropped out in order to make up a postponed contest with Massac County. Three of the four quarters in the Nashville-Highland game were fairly even, but Highland’s 19-9 run in the third quarter was a big part of their 46-37 win.

Offensive leaders for the Hornettes were Cole with 19 points, Rueter with 10 and Kollbaum and Schnitker with four each. 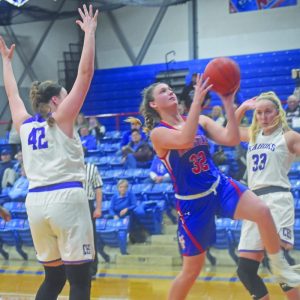