Before the varsity girls basketball game last Wednesday between Nashville and Chester, the Hornettes held a Senior Night ceremony. Congratulations to Ashlyn Frazier and Karmen Reynolds for their accomplishments at Nashville High School.

Nashville finished their season strong with a 52-29 win over Chester. The Yellowjackets briefly led 8-5 in the opening minutes but the Hornettes dominated the end of the first quarter and the first two minutes of the second with an 11-0 run. Chester cut the lead to four points during the third quarter but Nashville went on another big run that quickly saw their lead to 17 points early in the fourth.

Nashville also had a game against Pinckneyville earlier last week. Nashville won by a score of 43-32. The Hornettes only led by four after three quarters but outscored the Lady Panthers 11-4 in the fourth period.

Cole had another great night on offense with 25 points while Schnitker scored 10, Donato put in five, Rueter had two and Kozuszek added one.

With their two victories last week Nashville finished with an overall record of 11-3 and a conference record of 8-2. 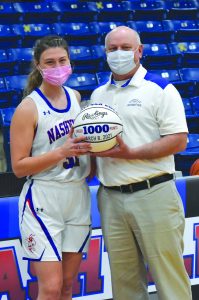 Junior Alyssa Cole was recognized during the Wednesday, March 10 home game for reaching a milestone in her basketball career. In the Monday night away game against Pickneyville, Alyssa scored her 1,000 career point. This puts Alyssa in an elite group of only 13 former Hornette players. Congrats on this accomplishment!