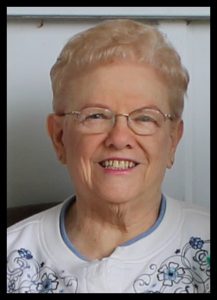 Bess was a devoted wife, mother and homemaker.  She was a member of St. Ann Catholic Church in Nashville, IL.  Bess enjoyed cooking, gardening and loved spending time with her children, grandchildren and great grandchildren.

She was preceded in death by her parents, husband, four sisters, Bonnie Bridges, Sonia Bridges, Mary Johnson and Pat (Don) Haggard and a brother, Bob Bridges.

Funeral services will be held at the Campagna Funeral Home in Nashville, IL on Monday, April 12, 2021 at 11 A.M. with Pastor Ronnie Mick officiating. Interment will follow in the St. Ann Old Cemetery in Nashville, IL.

Friends may call at the Campagna Funeral Home in Nashville, IL on Monday from 9 A.M. until the service hour.

Should friends desire, memorials can be made to the St. Ann Cemetery and will be accepted by the Campagna Funeral Home.