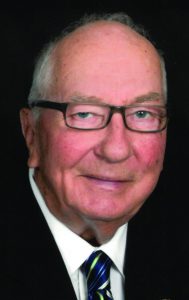 Roman Rojek, 88, of Tamaroa, passed away at 3:26 P.M., Saturday, July 3, 2021 at his residence.
Roman had been a farmer. He was also a coal miner and had worked at Burning Star #2 mine. He was a United States Army veteran of the Korean War. Roman was a member of the Immaculate Conception Catholic Church in Tamaroa. He was also a member of the American Legion Post 513 and UMWA.
He was born February 24, 1933 at Tamaroa, IL, the son of John and Anna (Worbel) Rojek.
He married Shirley Manees Weaver on December 1, 1956 at the Immaculate Conception Catholic Church in Tamaroa and she preceded him in death on January 2, 2019.
He is survived by five children – William S. Rojek and wife Michelle of Du Quoin, Monica Nowakowski and husband Richard of Pinckneyville, Mark Rojek and wife Angela of Tamaroa, Charlene Sparks of Fairview Heights, IL, and Gregory Rojek and wife Elizabeth of DuBois, thirteen grandchildren and twelve great grandchildren.
He was preceded in death by his parents, wife, two sons – Roman M. Rojek and Johnny Rojek, one son-in-law – Tony Sparks, six brothers and four sisters.
Mass of Christian Burial will be at 10:00 A.M., Saturday, July 10, 2021 at the Immaculate Conception Catholic Church in Tamaroa with Fr. Joseph Oganda officiating.
Friends may call from 8 A.M. until the time of service on Saturday at the church.
Military graveside rites will be conducted by the Du Quoin V.F.W. and American Legion and the Army National Guard.
Burial will be in the Immaculate Conception Cemetery at Tamaroa.
Friends may make memorials to the Immaculate Conception Catholic Church or St. Bruno School and will be accepted at the funeral home.
Searby Funeral Home in Tamaroa is in charge of arrangements.
For additional information or to sign the memorial guest register, please visit www.searbyfuneralhomes.com.