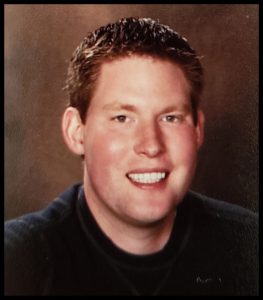 He was born on December 10, 1981 in Centralia, Illinois, to Dennis and Cynthia nee Windler Banks. He was baptized on December 11, 1981 at St. Mary’s Hospital, Centralia, by Pastor Eugene Davidenas and was confirmed at Trinity Lutheran Church in Nashville, Illinois, on March 31, 1996 by Pastor Jeff Schrank. Adam was a 2000 graduate of Nashville Community High School and attended Southern Illinois University – Edwardsville. He moved to Tampa, Florida in 2011, where he was employed in management with Autozone.

Adam loved roller coasters – especially the rides at Cedar Point in Ohio, playing ice hockey, the St. Louis Blues and Cardinals, and his family. He will be greatly missed.

Friends may call at Trinity, Hoyleton on Saturday, December 11, from 10:00 a.m. until the service hour.

In lieu of flowers, memorial contributions may be made to the National Pancreas Foundation and will be accepted by Campagna Funeral Home or may be made online at https://pancreasfoundation.org.