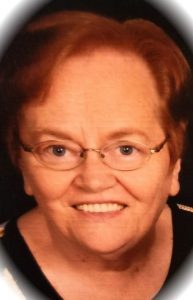 Loretta was born on April 14, 1945 in Du Bois, IL, a daughter to Michael and Esther (Marshalek) Konkel. On October 18, 1965, she married William Thomas “Pops” Gill in Du Bois, IL and he survives. Loretta was a baby sitter and a member of St. Bruno Catholic Church, Pinckneyville, IL. She loved shopping, spending time with the children she baby sat for and spending time with her kids and grandchildren.

She was preceded in death by her parents; one brother, John Konkel; one sister, LaVern Holtz; and one niece, Gail Hierholzer.

Loretta’s wishes were to be cremated and no service will be held at this time.

Memorials donations may be made to St. Jude Children’s Research Hospital or American Diabetes Association.

Pyatt Funeral Home, Pinckneyville, IL has been entrusted with the arrangements.

For more information or to sign an online guest register please visit www.pyattfunerahome.com.