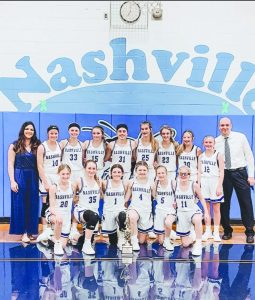 The Nashville Jr. Hornettes went into Friday evening looking to cap off a tremendous regular season. Going into the Regional as the number one seed, the team stood tall at 21-1. They also had the luxury of playing within the comfort of their home gym throughout the regional round. On Wednesday, the group began their march towards state with a 52-9 victory over Wayne City. While the offense was putting up points, the defense was strong as well as they only allowed the visitors two points in the second half. Emma Behrmann led the effort with 12 points, followed by Aubrey Rhine with 10. Belle Schmale finished the game with nine points, Brynn Stiegman had four, Maliah Reichmann, Reese Renth, Oelze, Popejoy, and Schoeberg all tallied two, and Gajewski capped off the night with one point.

Following their victory Wednesday, the team put themselves one win away from a trip to Rend Lake College. The only opponent in their way was Fairfield. The team began the game on an 18-4 scoring run before taking a 26-6 lead into the halftime break. The Hornettes eventually punched their ticket to the State Tournament with a convincing 43-15 victory. The team was led by Behrmann with 18, and Mikayla Gajewski with 15. Other scorers were Reichmann with three, Renth, Schmale, and Rhine with two, and Robinson with one. With a mark of 23-1 on the season, the team will begin tournament play this Friday at 7:15 against Pinckneyville. The Jr. Hornettes are coached by Tierney Moore and Ben Crawford.