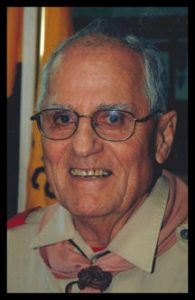 Mr. Hagopian was born on April 12, 1928, in Granite City, IL, the son of Armenian Genocide survivors, Kasper ad Rose (Parseghian) Hagopian.  He was united in marriage to his wife of 63 years Beverly Goodwin on July 26, 1958, at First Presbyterian Church in East St. Louis, IL and she survives his passing.

Zorab was a World War II Veteran serving with the United States Marine Corp as a rifleman SS.  He proudly served for the country he loved so much.  Zorab retired from Peabody Coal Company in 1990, having worked as a mine examiner and later worked on top.  He loved fishing, hunting, gardening and his favorite pass time was reading classics and poetry as well as teaching his grandsons chess.  As an assistant Boy Scout Leader in Nashville, IL, he attained the highest honor, the Order of the Arrow. His leadership also produced an Eagle Scout, his grandson, Kale Hug. Kale also accompanied him on the “Honor Flight” to Washington D.C.

In addition to his parents, he was preceded in death by his older brother, Zarzand Hagopian, two aunts and an uncle.

Per the wishes of Zorab and his family, cremation was performed.  Due to the Covid-19 virus being so prevalent, there will be a private memorial service held.

Should friends desire, memorials can be made to the St. Michael Cemetery Fund, Boy Scout Troop 127 of Nashville or to a charity of the donor’s choice and will be accepted by the Campagna Funeral Home, who is assisting the family with arrangements.