The Hornets continued their dream season on Thursday at the place where they had hoped it would end from the start of the campaign. State Farm Center in Champaign-Urbana was the setting for the 2022 IHSA State Championship series. Prior to this season, it was previously held at Carver Arena in Peoria, Illinois. The format of the games changed along with the location. In previous years the four classes were split up so 1A and 2A teams could play one weekend, and the 3A and 4A teams would play the following. This season, all classes were playing the same weekend. To accommodate the schedule, 1A and 2A teams played Thursday while the larger schools played Friday. All four championship games were then played on Saturday. To be on the slate for Saturday’s games, the Hornets needed to secure a win Thursday, or else they would be forced to turn around and play later that evening and therefore ending their state experience. Standing in the way of the Hornets on Thursday were the Rams of DePaul College Prep. The Rams came into the game with an overall record at 26 wins and 7 losses, while the Hornets stood at 28-4.

The Hornets found themselves trailing by six out of the gates before a Saxton Hoepker free throw put them on the board. It would be the only point the Hornets mustered together in the first quarter. Good news, their defense held the Rams to just eight. The theme remained the same throughout the second, but a 5-2 run in period two allowed the Hornets to trail by just four at the half. Trailing 10-6 heading into the closing half, DePaul was able to extend their lead to eight with 3:35 remaining in the third. As the Rams looked to pull away, the Hornets had other plans. Eight consecutive tallies by Hoepker tied the game at 19. From that point on, the Nashville defense only surrendered five points, and that is including two four minute overtime periods.

“These kids have done a tremendous job. That’s probably the most athletic team we’ve seen all year long from top to bottom. So just knowing personnel, and just knowing there’s not many kids we can help off of because they have so many kids that can score the basketball at different levels,” said Coach Weathers.

The Hornets completed the comeback with a 9-2 spurt in overtime, a run highlighted by a Kolten Gajewski dunk with seconds remaining. Following 40 minutes of play, the Hornets advanced to Saturday’s action with a 31-24 victory.

DePaul led the contest for nearly 30 out of the 40 minutes, but it was not enough to faze a team who has been victorious in two previous overtime games this postseason.

“It shows us that we can do anything in any situation. We’re all comfortable enough to stay calm and figure it out and play with heart when we’re down. It shows the family aspect of our team and what we can do when we put our heads together and work hard,” said Gajewski, who finished the game with seven points to go along with eight rebounds.

Included in his points is the aforementioned dunk, one that neither Gajewski or his teammates will not soon forget. With a smile, Head Coach Patrick Weathers told the senior to inform the press on how many career dunks he has. Composed as always, Gajewski responded, “so, that would be my first career dunk,” which of course sparked laughter amongst his teammates. He continued, “to do it on a stage like this is awesome, to put them away like that, I couldn’t ask for a better situation.”

After having only one point in the first half, Nashville’s other senior big man, Hoepker, was able to find his groove in the second half, scoring 12 of the team’s 25 points.

“Don’t be scared, coach was telling me don’t be scared to take it in and shoot, so I just listened to that,” said Hoepker.

Senior Isaac Turner made sure to give credit to the Nashville faithful, who showed up in packs to support their hometown team on the biggest stage of the year thus far.

“The support we get from the community is unreal, it doesn’t matter where we play for football or basketball, it doesn’t matter how far, it doesn’t matter, we’re going to have fans there and the community is going to come out and support. That’s a huge factor for us to come out and be able to do what we do,” said Turner. Gajewski continued, “With the groups we’ve had ahead of us, we’ve always been that diamond in the ruff team, but we’ve always known within ourselves that we can do it. Just being able to grind it out and go to the state title two times (football), it’s pretty awesome. It’s going to be something we tell our kids or talk about around a fire someday, and it’s going to be amazing.”

In the collective effort, Hoepker finished with 13 points and 10 rebounds, Turner threw in five while Nolan Heggemeier and Carter Schoenherr each finished with three.

Each starter played the whole 40 minutes of play, and the team was rewarded with a day of rest following their semi-final victory. In the state championship matchup, the Hornets were assigned the Sages of Monticello, who play their home games just 25 minutes southeast of the State Farm Center. Sitting at 29-4, win number 30 also meant the Hornets’ first State Championship since 1978. Monticello (33-4) were fresh off of their victory over Rockridge. Although Nashville scored first courtesy of Gajewski, the team found themselves trailing by one at the half in what would prove to be another defensive battle. Fast forwarding to 2:40 left in the final frame, Nashville trailed by six points, 31-25. Enter, the seniors. Nashville closed the game out with seven straight points in the form of a Heggemeier triple, a Gajewski bucket, and the lead was taken back with under thirty seconds to play when Hoepker drove baseline and layed it in. Now leading 32-31, the Hornet defense was tasked with one final stand. The Sages were able to get up a shot attempt, but Hoepker denied any chance of the ball getting to the rim. The block resulted in a lose ball, which was recovered by the Hornets, and the goal that was 44 years in the making became a reality. Nashville wins, 32-31, and the highly sought after State Championship trophy found itself itself a new home at Nashville Community High School. Much like the DePaul game, the Hornets trailed most of the game. In a back and forth bout, Nashville held the lead for just under ten minutes of 32 compared to 20:44 of Monticello. Seeing the end result, that stat became an afterthought.

“Credit to Monticello and Coach Roy, they have a great program. You’ll be seeing them around for years to come. I feel like we stole one there. I can’t say enough about how resilient this bunch of guys are sitting up here with me, never giving up. We didn’t have great vibes down the stretch there, but we got enough stops, got enough rebounds, and partially blocked there at the end. A whirlwind of emotions right now, I’m not really sure what to say,” said Coach Weathers.

Defense was the narrative once again, as the Hornet defense held the Sages to just 35% shooting on the day including zero chance opportunities. In the victory, the team continued the “win ugly” mentality, as they too only shot 36%.

“Today was no different. It wouldn’t be this group if we came out on fire and took a double digit lead, didn’t really expect that. I didn’t really expect to be playing from behind the entire time either, but the old cliche defense wins championships, it’s not always pretty, but these guys find a way to get it done,” said Weathers.

Gajewski, who finished with 14 points and 11 rebounds, reflected on his contributions down the stretch.

“It’s always nice to have a guy to be able to take over, but I think our whole team is made of guys who can take over and lead when the going gets tough, and I think all it was is putting more effort than the other team, it wasn’t anything special, anyone on our team could’ve done it,” he said.

In what will be remembered as one of the most iconic moments in the school’s history, Hoepker reflected on his defensive play in the closing seconds.

“For that to seal the game was huge, Kolten had a great game and carried us most of the way, but the block at the end felt great,” he said.

Trailing by one at the half, although the fans in the stands remained tense, there was never any panic within the locker room.

“I was like we’ve been here before, no need to panic, keep grinding and valuing each possession. We had some uncharacteristic turnovers, I felt we were pressing at times, but then again our defense bailed us out. We got enough stops and eventually took the lead,” said Weathers.

While “win ugly” may have been the motto of the team, there was another motto that fueled the team, family.

“I think what makes us successful at Nashville is we make our team our family, it’s more than just a sport to us, we all care about each other so much,” said Heggemeier.

Heggemeier, who left the game early on to tend to a head injury, was able to come back into the game and finish his career on the court rather than on the sidelines.

“My heads kinda pounding right now, it’s really hurting. I wanted to get back out there so bad and help these guys win. It means more to me that these guys are happy than it is for me. I’m just so happy to be part of the team and win a State Championship for the town,” he said.

While this is Coach Weathers’ first year under center, he is part of a coaching staff made up of Brad Weathers, Kelly Cruser, Jason Guest, Tommy Pelczynski and Calvin O’Rear, a group that has been together for many years.

“I’m just the guy who’s lucky enough to be able to stand on the sidelines and scream and shout and act like a crazy person a lot. Most of the coaches, we’re all Hornet alum. We all played for Darin Lee, who was up here five times. There’s no way I could do this by myself. They’re huge, they each have their own things they take care of, their strengths, and I really lean on them so much throughout the games. It’s really fun for a community like ours, we’re so spoiled and fortunate to have a lot of these experiences. It’s going to be really sweet to raise a banner in Assembly Hall after 44 years,” said Weathers.

In the victory, Turner finished with six points, Schoenherr with five, Hoepker with four, andd Heggemeier with three, As always, the Hornets returned home to a warm reception beginning with a victory lap around town followed by a reception at their home in Assembly Hall. For the season the team finished with a final record of 30 wins and only 4 losses. 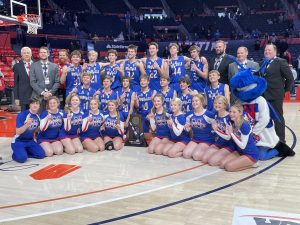 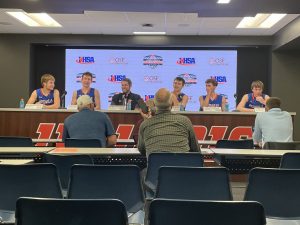